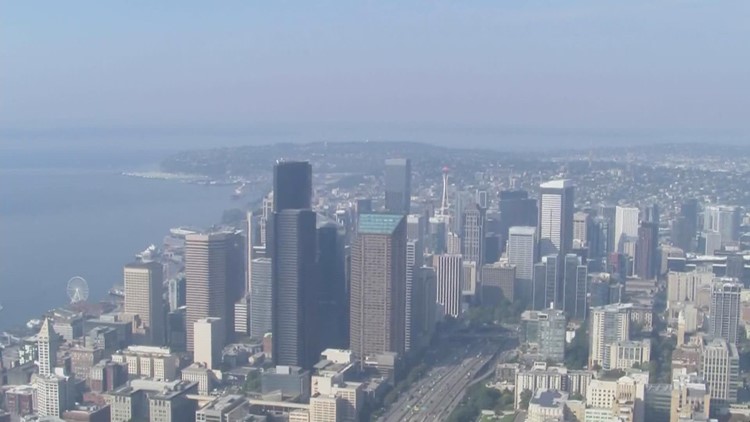 Many agencies have issued Air Quality Alerts, in effect until 11 a.m. Monday.

SEATTLE – An air quality warning will be in effect for much of western Washington this weekend due to wildfire smoke.

Air quality around the Puget Sound area is considered unhealthy for sensitive groups, but areas along the Cascade Valley may experience reduced air quality due to wildfires.

Many agencies have issued Air Quality Alerts, in effect until 11 a.m. Monday.

An air quality warning was in effect for Lewis, Skagit and Whatcom counties on Friday morning, according to the National Weather Service (NWS).

Air quality levels were mostly moderate from Everett to Tacoma on Friday night, while Bellevue air quality was recorded as poor for sensitive groups, according to data from the Department of Ecology. Air quality is poor in North Bend and dangerous in Darrington, which is close to active fires.

The EPA says sensitive groups, including people with heart or lung disease, older adults, children, and pregnant people, should avoid outdoor exertion and minimize exposure to secondhand smoke as much as possible.

The fires in the Chilliwack Area and Bolt Creek were the cause of all the smoke. Crews are fighting the Bolt Creek Fire with a consumption strategy – essentially allowing the fire to burn, which reduces erosion and creates safer conditions for those crews.

An increase in wildfire smoke is expected as offshore flows strengthen later this week. That’s when we’ll be dealing with our thickest smoke and worst air quality.

A Red Flag Warning has also been issued from 11 a.m. Saturday to 5 p.m. Sunday for the western slopes of the North and Central Cascades. The NWS has issued a warning due to moderate winds, low humidity and warm temperatures. A Red Flag warning means that critical fire weather conditions are “ongoing or coming soon”. If a fire breaks out, the smoke can further degrade the air quality in the surrounding area.

Suiattle River Road and Grade Creek Road west of Buck Creek were also closed due to fires in the Suiattle River and Lake Boulder.

Due to severe fire conditions, campfires, coal fires, or stove fires are prohibited throughout the entire Mount Baker-Snoqualmie National Forest. In addition, smoking is also prohibited outside of buildings or covered vehicles.

Inshore currents started to return throughout Sunday and should significantly reduce haze and temperatures on Monday.

Wildfire smoke can cause health problems, especially for sensitive groups, including infants, children, people over 65, people who are pregnant, have heart or lung conditions, infections respiratory infections, diabetes, stroke survivors or those with COVID-19, according to the Puget Sound Clean Air Authority.

The agency recommends the following in light of declining air quality:

Who is the new British prime minister? Meet Rishi Sunak