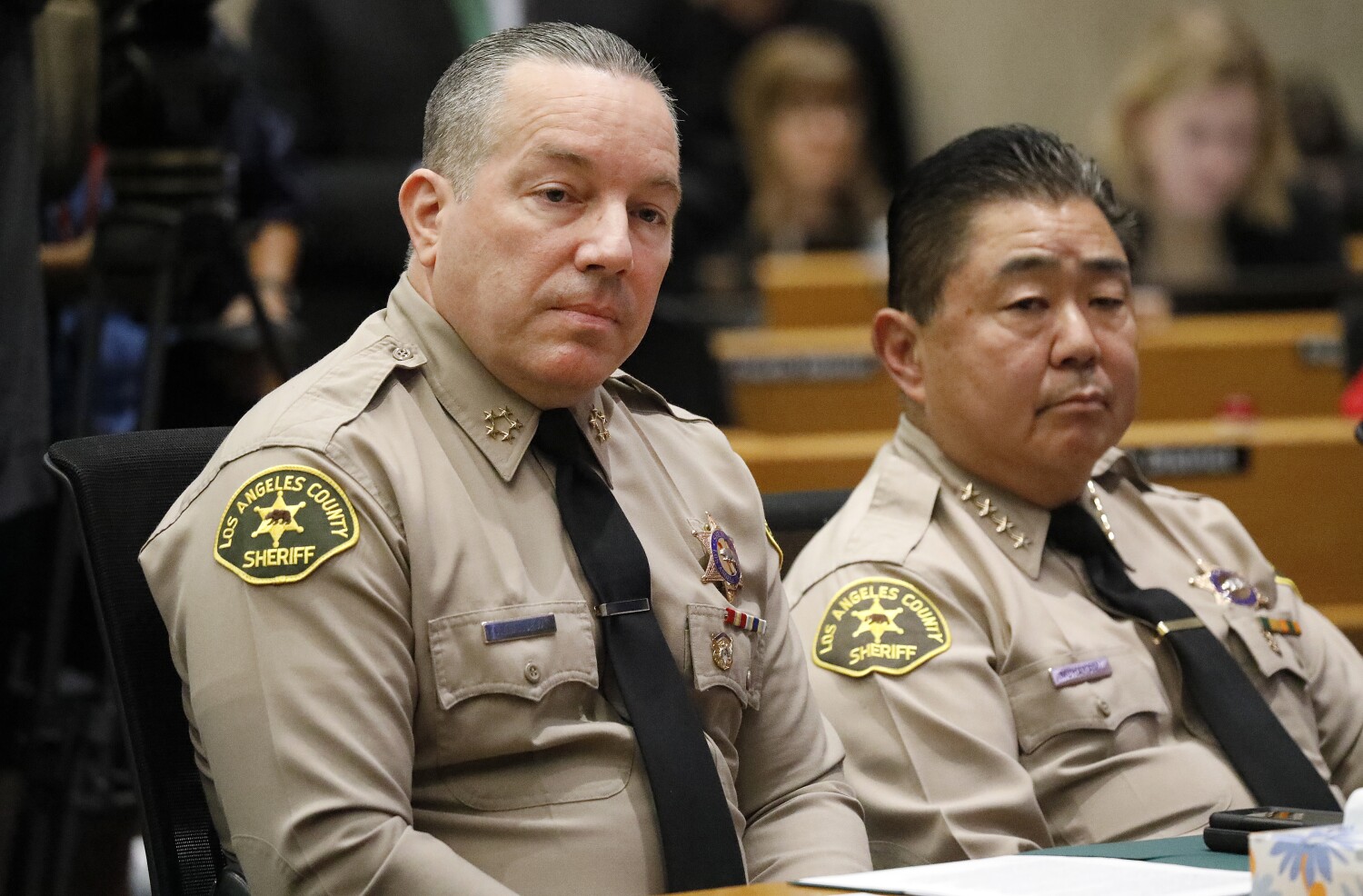 People often ask me what it’s like to cover for the Los Angeles County Sheriff’s Department.

There have been satisfying moments—when a story I’ve written led to a new privacy law in California or exposed an issue that would otherwise have remained hidden. And there was the not-so-comfortable time when Sheriff Alex Villanueva named me a subject in a criminal investigation and then quickly took it back.

But most days are more mundane. This often involves phone calls to sources who share tips or little bits of information, many of which I then try to confirm with more phone calls, emails, and more phone calls.

When I’m chasing a story, there comes a point where I need to tell the sheriff’s officers what I’m working on and ask for an official response. This is where it gets frustrating all too often.

While Villanueva has anointed himself the most transparent sheriff in the history of the department, the truth is that he and officers under him routinely resort to obfuscation when dealing with me and other journalists seeking information about the inner workings of the department .

The sheriff’s chief of staff, for example, once admitted to me that the way I phrased a question made him “cry” to give me information. The same chief of staff literally slammed a door in my face on another occasion when I tried to question Villanueva. Last year, Villanueva and his staff refused to answer my questions about the ministry’s public corruption department, claiming I had a conflict of interest but refusing to explain what it was. And Villanueva has not sat down with me one-on-one, despite my many requests and his public invitation a year ago.

Another more recent case: A while ago I got a tip that a few years ago, when Undersheriff Tim Murakami ran the Industry Sheriff’s Station, he selected a company that now employs his adult son to run security cameras on the station to install .

The notion that Villanueva’s deputy, who oversees the public corruption investigation, might have had a nepotism problem was troubling.

I previously covered Murakami. In 2020, a county oversight panel found that he violated the anti-discrimination department’s policy when he used a Japanese racial slur to refer to employees of color. He denied the allegation, and Villanueva later declined the panel’s recommendation that Murakami be disciplined.

Murakami has also refused to comply with subpoenas issued by the department’s watchdogs and recently refused to testify about gang-like groups of MPs because it would be too stressful.

Some research into the tip about the surveillance cameras turned up enough evidence to prove the basics: the security company had done some work for the station, and Murakami knew it. But there were many details to discover: How much work was done and when? Did Murakami’s son, who shares his father’s first name, get his job before or after the company did the job? How much was the company paid?

In March, after a press conference, I reached out to Murakami and asked him about working at Industry Station, which involved Am-Tec Security.

“Who to involve?” he asked.

“Am-Tec, the company your son works for,” I said. “Did you hire them to do security cameras in the industrial station?”

“I don’t even know what you’re talking about,” he replied before walking away.

At that point I had already seen documents showing that this could not be true.

They included an email Murakami sent in November 2017, when he was the captain overseeing the industrial station, to alert staff that the “station’s security surveillance system is being maintained by AM TEC Security.” He gave a phone number for the company.

I emailed Murakami to ask about the email and why he had denied knowing anything about the work the company had done on the station. He didn’t answer.

Instead, I heard from Lt. Oscar Martinez at the Sheriff’s Information Office handling media inquiries. He reprimanded me for trying to contact a department head directly. Instead, I was supposed to send inquiries through the “Contact Us” form on the department’s website, which inexplicably requires journalists to provide their location before asking a question.

“On the other hand, this process of yours will not speed up the answers; It will delay the department in responding to you as our leaders are very busy managing the department and keeping our residents safe,” Martinez wrote.

By then I had been walking back and forth with Martinez and others at the information office for weeks.

I have sent inquiries to the office – which employs about 20 deputies and sergeants who are “available 24 hours a day, seven days a week to provide a range of services to department staff, the public and the media.” , according to the department’s website – asking for information about work Am-Tec has done for the department.

The department, I was told in reply, has no current employment contracts with Am-Tec. If I want more information, I should ask the company, the office said.

When I pressed Martinez for clarification, he was unequivocal.

“Am-Tec Security was not signed by LASD. They were approved by the county as contractors but not used by LASD,” Martinez told me via email.

I referenced Murakami’s 2017 email to employees about Am-Tec, which showed that Martinez did not give me specific information. He changed his answer.

“Am-Tec did the original installation of the cameras in the Industry Station,” Martinez said. “However, the broadcaster has not done any further business with the company.”

That wasn’t true either.

I knew from documents I received from the City of Industry via Public Records Request that in March 2019 Am-Tec had done another small job for the Industry Station. And I knew Murakami was involved, even though he had already left the station after being promoted from Villanueva.

Three days before Murakami was appointed undersheriff, Am-Tec billed him directly for $2,055 — an invoice for additional cameras the company had installed across from the sheriff’s station. Industry’s documents, which the Sheriff’s Department pays for law enforcement services, included a copy of the bill and related emails.

Records showed how Murakami forwarded the bill to the city’s director of industry, who later agreed to collect the bill.

Martinez and others at the information office have repeatedly refused to answer questions about the extent and cost of work the company has done on the station. (The agency is now listed as a customer on Am-Tec’s website.)

“I’m already answering your questions,” Martinez wrote. “You can contact the county as they are the ones who did the work. The Ministry has not entered into any contract with this company.”

Before signing his name, he added, “Final Statement.”

I called the younger Murakami. He told me that the work the company did with his father was before he was hired in 2015. According to his LinkedIn profile, he has worked in a variety of roles including equipment installation, sales, and project management.

“The honest truth is that every job was done before I even started working at the company,” he said. When pressed, he said small relief projects may have been done since then, but he was not involved.

A showcase for compelling storytelling from the Los Angeles Times.

He agreed to send me documentation supporting his claim but never did. My multiple follow-up emails and phone calls to him went unanswered.

I filed a public records request with a separate office in the county’s massive bureaucracy to obtain documents related to Am-Tec’s work for the county.

A few weeks later I received about 100 pages of documents in response – mostly orders for Am-Tec’s work for a rehabilitation center in Downey. Four pages at the end referred to the Industry Sheriff’s Station.

They showed that the company had charged $4,300 to install parking lot cameras in 2017 and about $1,000 in 2018 for a new camera and repairs. I sent questions to the sheriff’s department, asking if those were the only jobs Am-Tec did at the station. There was no answer.

The full extent and cost of the work – and whether special treatment played a role – remains unclear. I will keep reporting.

https://www.latimes.com/california/story/2022-08-26/murakami-son-security-company-am-tec Hello, Sheriff’s Department? How about a straight answer?