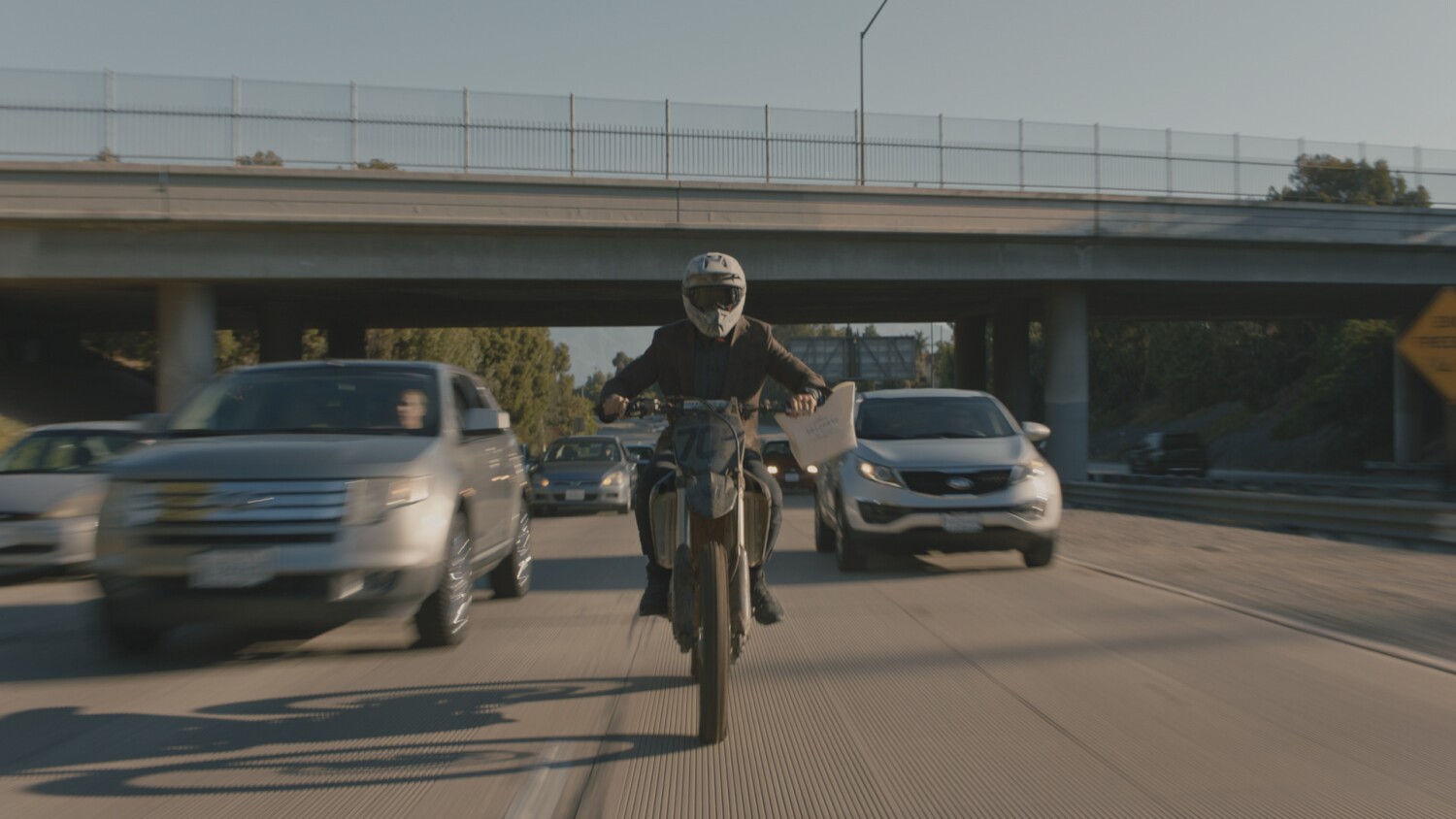 Nothing in Season 3 of “Barry” stands out like the virtuoso sequence near the end of Episode 6, “710N,” as the hitman/actor attempts to outrun a vengeful motocross gang stuck in a traffic jam on the titular freeway.

There’s more to the episode, though, which is why it earned three of the HBO comedy’s 14 nominations this round: for directing star Bill Hader and Duffy Boudreau’s screenplay, and for stunt riding team.

Relive the John Ford-inspired desert idyll where Fuches (Stephen Root), obsessed with revenge on his ex-partner in a assassination contract, squanders another chance at paradise. Or master beignet maker Mitch (Tom Allen), the stoner oracle who imparts wise wisdom to Barry, Sally (Sarah Goldberg) and NoHo Hank (Anthony Carrigan), which they promptly ignore.

But yes, this hunt.

“What really stood out about the sequence was Bill’s idea of ​​how he wanted to shoot it,” says stunt coordinator Wade Allen, himself a season nominee. “It wasn’t covered like a conventional action sequence, he didn’t bother to make it action-packed. He let the camera sit back and watch what was happening and it did everything for him.”

It started with the pre-visualization of the entire sequence using computer animation. From Barry’s car being surrounded by the motorcycles of the murderous Taylor gang and colliding with one of their motorcycles and being taken over, to cutting into traffic on the 710 in Pasadena and having dozens of idling vehicles split the lane on the Alhambra stretch of the freeway – every shot was destined for perfection.

“It mostly contained the camera angles, there was only one angle that we didn’t use,” Hader tells Envelope. “People could see that this isn’t a car chase where there’s a lot of insertions of cutting to speedometer or a hand revving up an engine and it’s not shaky. It’s just very simple recording, simple dynamic reporting.”

deceptively. Lane division was rehearsed in front of around 40 cars in the Forum car park. The California Film Commission, Highway Patrol, Caltrans, LAPD and the Alhambra Police Department were all involved in approving and securing the 710 Freeway filming, which took place over three Sundays last September. Two cam cycle specialists, Regis Harrington and Dan Wynands, were hired to drive the 100 pound remote controlled camera rigs in front of and behind the picture wheels.

“Do not turn around!” was the trick to whizzing back and forth between cars at 40 mph, according to Dave Castillo, the nominated stunt driver who doubled for Barry. “That was by far the fastest I’ve ever experienced in a lane split. I was a bit concerned that the beignet bag hanging from my wrist might catch a side mirror on a car and cause me to fall. Luckily that didn’t happen.”

Clay Cullen pulled off a botched gun pass with perfect slapstick intent. In it, one of the gang shoots Barry from the sunroof of a stuck vehicle as Barry roars by. A handover of the gun to the biker close behind goes awry and the biker grazes a vehicle and crashes into the traffic ahead.

“It was actually a great, simple joke,” says contestant Cullen. “All my career I’ve crashed motorcycles, mostly straight onto the pavement. Wade had me attach the back of a cargo trailer, then I flew into boxes. I still fell, but it was kind of nice not going straight to the ground.”

A special ramp was built for another contestant, Jolene Van Vugt, to drive onto the roof of the used car dealership that Barry encounters during the last inside-outside wide-angle shot of the sequence. The place was an empty AutoNation in Torrance.

“The steel deck was raised about 4 feet to the edge of the sides of the building so I could be seen clearly by the camera below as I rode and the shots that caused me to fall,” says Van Vugt. “It was an extremely fun scene to shoot, technically and creatively.”

It had to be everything.

“In the original script, there was just one italicized line that said, ‘There’s going to be a great, groundbreaking sequence,’ and it wasn’t really addressed,” said director of photography Carl Herse, who is the 710N and is the finale’s director third season, “Starting Now,” nominated.

Boudreau acknowledges that his contribution to the iconic sequence of “710N” was limited, but he helped bring out some of its comic aspects.

“Bill was inspired by ‘Mad Max: Fury Road’ and all that traditional pursuit stuff, but it also had to fit our show, which is funny,” says the writer, who has known Hader since they were kids in Tulsa, Okla., says. “There’s a lot of stupid stuff going wrong, like the bike not working, so the sound design became a big part of the joke. Little moments like Barry crashing into the bins in the background while the used car salesman shares too much. When we do a big action scene like that, you want to do something cool to make it a part of our show.”

From beignets to bikes and ballistics, that can mean a crazy assortment of tunings that somehow work together.

“Me and Bill like ’70s movies and foreign stuff that plays with different tones, can be very serious and very funny in the same movie and not really care about the genre,” says Boudreau. “We feel comfortable when we have those moments together. That’s always been a big thing on the show.”

“It’s kind of, well, it’s funny and stuff, but it didn’t really hit me until I sat down and saw a snippet of how crazy it is,” Hader says of the 710N trip.

https://www.latimes.com/entertainment-arts/awards/story/2022-08-10/barry-freeway-chase-scene-emmys Here’s how that crazy ‘Barry’ chase scene came together

How to Update the Firmware for a MagSafe Battery Pack

The internet clowns Logan Paul for not understanding ‘Nope’

‘House of the Dragon’ HBO: A guide to key characters, houses