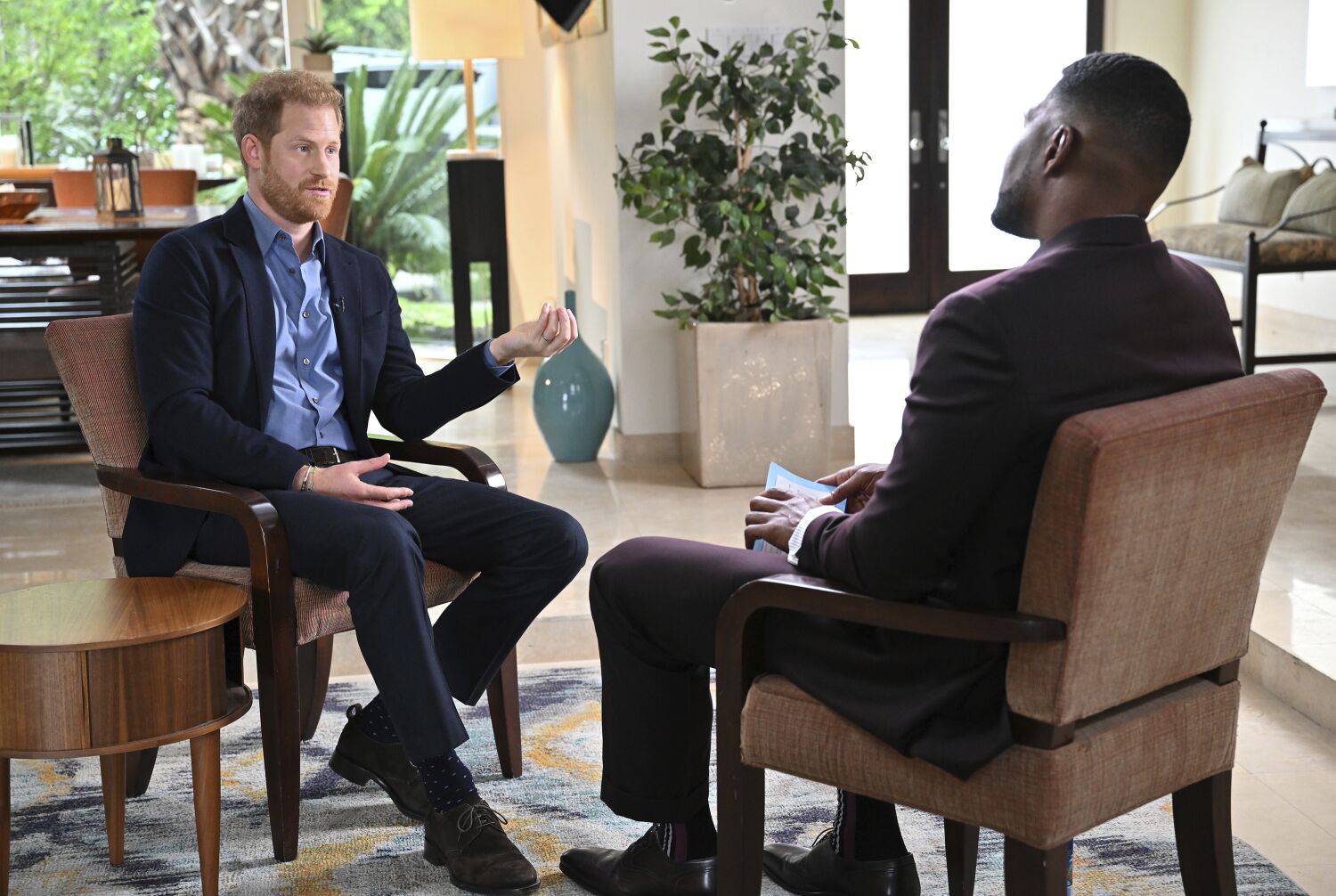 In a series of lively television interviews, Prince Harry is already opening up about the release of his all-encompassing memoir, Spare.

To promote his forthcoming book, the Duke of Sussex appeared on 60 Minutes, ITV and Good Morning America on Sunday and Monday – with another appearance coming up this week on The Late Show With Stephen Colbert. “Spare” should arrive on Tuesday.

Speaking to 60 Minutes’ Anderson Cooper, ITV’s Tom Bradby and GMA’s Michael Strahan, Harry opened up about his marriage to the former Meghan Markle, strained relationships with members of the royal family and the effort to bring his death in the year 1997 to process mother, Princess Diana.

Below are highlights from all three interviews.

The “gulf couldn’t be bigger” between Harry, his brother and his father

Asked by Strahan if he was worried “Spare” would “further separate him from Prince William and King Charles III,” the Duke of Sussex said it wasn’t possible. He expressed a desire to heal relationships with the men in his life.

“I’ve thought about it long and hard, and as far as I can see the gap before this book couldn’t be bigger,” he said. “But I really believe that … me and my family can reconcile, put our differences behind us.”

First, however, “there has to be a conversation and accountability,” he added. “If that doesn’t happen, it’s very sad. But I will focus on my life, my amazing family that I am so thankful for, my two children. … There are things that will annoy me. But I’m not angry anymore because I’m exactly where I should be.”

Diana would be “heart broken” by the rift between her sons.

Reflecting on his broken relationship with the Prince of Wales, Harry “blamed the people [William] busy” breaking a pact the brothers had made never to arm their offices against one another.

He added that his late mother would be “sad” to see how her sibling dynamic has unfolded.

“I think she would take a long-term view of it – to know that there are certain things that we need to go through in order to be able to heal the relationship,” Harry told Strahan.

When asked by Strahan if he deserved any responsibility for the dispute, Harry said, “No question, I’m sure he does.”

“But what people don’t know is the effort I’ve made … to resolve this privately, both with my brother and my dad,” he added.

“For a long time,” Harry said, “he refused to accept his mother’s death.”

He told Cooper that he and his brother believed Diana simply decided to disappear and would eventually call and invite her to join her.

“‘She would never do that to us,'” Harry recalled as he thought. “‘Maybe this is all part of a plan.'”

When he was 20, Harry asked to see a police report that included photos of the car accident that killed his mother. Although the photos “provided evidence that she was in the car,” Harry told Cooper he was in denial until he visited the scene of her death in Paris, aged 23.

Harry revealed that he and William asked their father not to marry the former Camilla Parker Bowles after her mother died. (Charles and Diana famously filed for divorce after his affair with Camilla came to light.)

“We didn’t think about it [the marriage] was necessary,” Harry said to Cooper. “We thought it would do more harm than good and that just being with him now would be enough. Why go so far if it is not absolutely necessary?”

In the end, however, the brothers let it go because they wanted their father “to be happy, and… saw how happy he was with her.”

Harry claimed that William and other relatives immediately distrusted Meghan due to “stereotypes” that led to prejudice.

“The fact that she was American, an actress, divorced, black – multiracial with a black mother – these were just four of the typical stereotypes that … become a binge-feeding for the British press,” Harry told Cooper.

“My family reads the tabloids,” he added. “So whether you walk around and say you believe it or not… it still leaves an imprint on your mind. So when you start out with that judgment based on a stereotype, it’s very, very hard to get over it.”

The Duke of Sussex also admitted to Bradby that William and his wife Kate, now Princess of Wales, did not get together with Meghan “almost from the start”, daunting his hopes of an alliance between the couples.

“I thought the four of us would bring me and William closer together, we could go out and work together – which I often did as a third wheel for them, which was fun at times but also, I think, a bit awkward at times,” he says .

“I don’t think they ever expected me to … get into a relationship with someone like Meghan, who’s had a very successful career.”

The royal family missed an opportunity for “representation” with Meghan

By not fully accepting and supporting his wife, Harry told Strahan the palace suffered a “hugely missed opportunity”.

“Representation is something [Meghan] told me from the start,” Harry explained. “And I, as a privileged white man, didn’t really understand what she was talking about.”

Speaking about the British media’s racist attitude towards his wife, Harry admitted that he “had no idea the British press was so bigoted” and that he too was “probably bigoted before” about dating Meghan.

“Did [the column] surprise me? no Is it shocking? Yes,” Harry said to Cooper. “I mean, thanks for proving our point.”

When asked by Cooper if the palace ever responded to the hit, Harry said, “No. And there comes a point when silence is treason.”

Speaking to Bradby, the Duke of Sussex denied accusing his family of racism during his and Meghan’s bombshell TV interview with Oprah Winfrey.

“That’s what the British press said,” he quickly interjected. “Did Meghan ever mention they are racists?”

During the Winfrey special, Meghan claimed a member of the crown had raised “concerns” about the skin color of her eldest child, Archie, before he was born. While Harry agreed that such an interaction did take place, he told Bradby that he would not call the incident racist per se.

Harry dismissed the idea of ​​relinquishing his royal title

Since Harry and Meghan decided to “step down” as senior members of the royal family, many have asked – and even demanded – that the Duke and Duchess of Sussex relinquish their royal titles.

“And what difference would that make?” Harry Cooper asked.

He also said he couldn’t see himself returning as a full-time member of the royal family.

The monarchy cannot continue as it is now

Although Harry Strahan said he “sincerely” believes there still is a place for the British monarchy in modern society, he added: “Not as it is now.”

Pressed further, Harry suggested the royal family could face what he sees as their “unconscious bias”.

“I think the same process I went through … in terms of my own unconscious bias would be of great use to her,” he said. “It’s not racism, but unconscious prejudice, if not confronted, if not learned and grown from it … can then turn into racism.”

Did the palace react?

Not yet. Both 60 Minutes and GMA noted that Crown officials demanded to see full transcripts of the interviews when approached for comment. Neither program agreed to the Palace’s terms, citing journalistic ethics.

We have a Ghost release date, cast, synopsis, trailer and more

Iggy Azalea is now selling GRAPHIC PICTURES of herself on Onl***ns… and the pics were leaked!