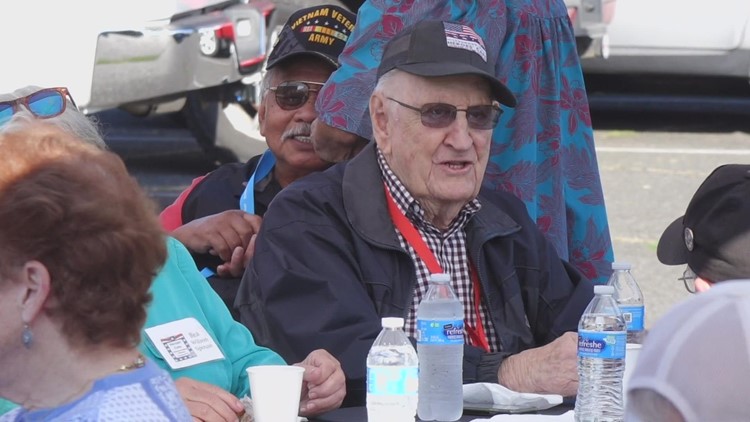 The Heroes’ Cafe in Lynnwood is dedicated to honoring and supporting US military veterans.

LYNNWOOD, Wash. — On the fourth Tuesday of every month, a group of friends, family and supporters gather to honor US military veterans at the Heroes’ Cafe, an outreach event in Lynnwood.

The Army, Navy, Air Force, Marines, Coast Guard and Space Force are all represented. Director Gary Walderman says it’s a place for veterans from different walks of life to come together and share stories, resources, and a meal.

“We breakfast and eat for them for free, and when we noticed that some of the vets were asking if they could take some extra food with them, we knew we needed more help,” Walderman said.

From then on, a local food bank also got involved and now routinely shows up to offer food to veterans in need.

Walderman says it was the troubling trend in veteran suicides that led him and several other veterans to talk about starting a support group.

“So many of these veterans have been through traumatic things and need the support of other people who have had similar experiences and can help them heal,” Walderman said.

According to the United Service Organizations, some branches of the armed forces are experiencing the highest suicide rate since before World War II. Walderman says he wants the Heroes’ Cafe to be a self-propelled lifeline where veterans help veterans. Providing them with a safe and supportive place to bond is at the core of its mission.

At this month’s gathering, more than 150 veterans gathered to share a meal and pastries from the Bakers Angels.

A local student also turned up to inspire local veterans with some good news.

Moses “Mojo” Martin is a local Edmonds-Woodway high school football player and has dedicated his senior season to his heroes.

“I don’t think my generation really gives our veterans enough credit. I was thinking about what cause I could get involved with my final season, and the military was the first thing that came to mind. I’m not just playing to win anymore, I’m out there trying to support these veterans and raise money,” Martin said.

Martin has set up a GoFundMe page asking for donations for “every tackle or quarterback sack.” The linebacker wears the number 9 and has already raised $3,000 for Heroes’ Cafe.

His father, Earl Martin, says “Mojo” honors veterans because he genuinely looks up to them.

“It’s also part of our Native American tradition in our family – to respect our elders. Moses has asked for their guidance throughout his life and now he is honored to give back to them,” said Earl Martin.

SHOCKER: NBA Player Is Accused Of R*ping A MAN . . . Police Report Being Filed As WE SPEAK!!