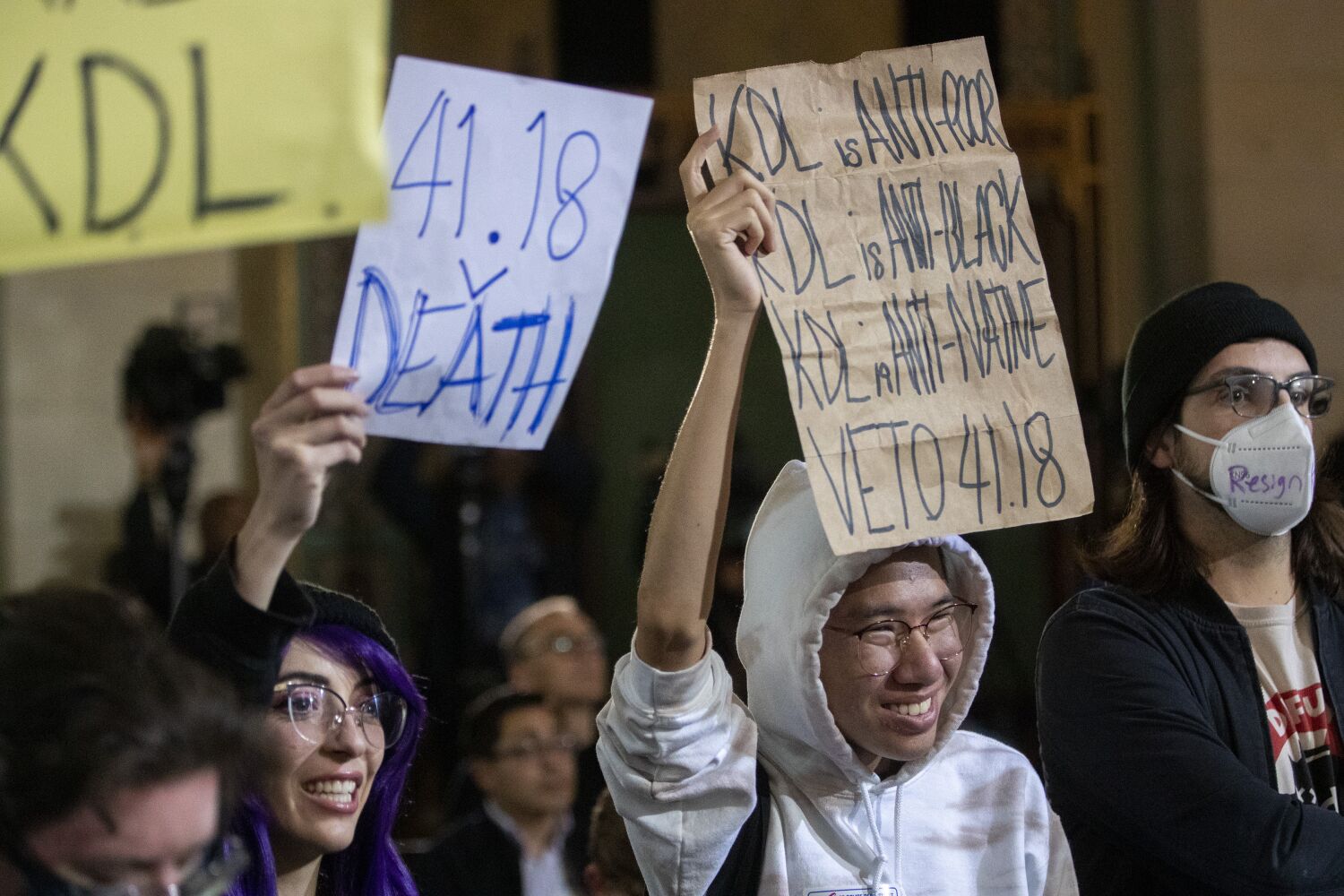 It would be difficult to imagine a new year in Los Angeles politics more dramatic than the show we were treated to in 2022, but this is a city where sequels sometimes exceed expectations.

Rick Caruso spent $100 million of his own money on a mayoral campaign and lost decisively.

A city council member and a union leader resigned in disgrace after a recorded conversation containing racist comments was leaked.

Another council member, heard on the same recording, wore a Santa hat to a neighborhood toy giveaway and got into a scuffle with a protester. The Santa hat fell off his head. children were crying. Merry Christmas to everyone.

A newly elected councilor has called for the abolition of the LAPD.

A young accountant who once called President Biden a rapist and advocated the jailing of Hillary Clinton defeated his establishment opponent in the race for city controller.

And city council meetings are routinely disrupted by protests that quickly degenerate into an F-bomb contest.

I usually appreciate the artful use of profanity and the labeling of political enemies as fascists, especially when it’s aimed at people who don’t set the world on fire in their chosen careers. But at the last chaotic council meeting, the last in 2022, the first speaker used variations of the F-word to the point of exhaustion, blunting the daggers.

In defense of that particular curse, I’d note that some of his references were to outgoing council member Paul Koretz deregistering when he dropped his own f-bomb — sending out an open invitation to would-be copycats for years to come.

“There’s no point in interrupting for the sake of interrupting,” said policy consultant Rick Taylor, noting that the business of meeting the needs of 4 million people won’t get done if meetings get derailed. “We have problems here in LA”

But it’s becoming increasingly clear that tackling these issues won’t be easy as long as councilor Kevin De León, the rowdy Santa Claus, defies calls to quietly back down and even Biden joins the chorus. Incidentally, De León seems to me to have been both a victim and a perpetrator in this wrestling match, although it’s hard to side with anyone other than the children who had to witness the affair.

Ideally, it would be nice to continue the recall process and let voters in the 14th council decide whether to give De León the boot for his participation in — and his failure to end a conversation full of offensive stereotypes.

But that would take months, and his own constituents would pay the price.

Bernadine Bednarz, a 30-year-old Monterey Hills resident, told me she had repeatedly tried to call De León’s community office to request his resignation, but was unable to get through to anyone.

“I think he soiled the office,” said Bednarz.

One Eagle Rock resident told me that while she had been a supporter of De León, she felt he had failed to explain himself to constituents and answer questions about whether he could do his job going forward . “I think the councilor has been politically harmed and may not be able to carry out his duties,” she said.

“KDL must step down for the good of the city, the council and the residents of the 14th Precinct,” said Jaime Regalado, professor emeritus of political science at Cal State LA. Had De León resigned when the scandal broke, Regaldo said, “He might have been able to salvage some kind of political career over time. But that time has come and gone.”

As the acting “poster child” for protesters, Regalado said the disruption will “continue raw and unabated until he’s outside.”

Raw and unabated protests began before the leaked audio scandal, and they may continue even if De León finds a measure of humility and says goodbye to the smoldering wreckage of his once burgeoning political career.

De León took some pressure because, like many other council members, he believed that tiny-house villages and other temporary arrangements were preferable to letting people suffer or die on the streets while they wait for permanent housing to be built. And because he, along with most council members, supported an ordinance banning homeless camps within 500 feet of schools and daycares.

Even with a few committed leftists joining the new city council, the moderates are likely to hold the majority, and newly elected mayor Karen Bass will join them as she seeks to deliver on a promise to accommodate 17,000 people in her first year in office.

So what can we expect in the new year?

It’s the holidays and I’m trying to be happy, okay?

Second, voters can quickly turn against politicians who don’t deliver on their promises. So she better figure out quick ways to contain the chaos, herd ride, and get things done.

The cage-rattling protesters at City Hall aren’t the only ones calling for change. Scores of middle-class citizens feel overwhelmed and underserved, and many of the frontline people who make the city run often can’t afford to live there, union leader Arnulfo De La Cruz told me in September when Health care workers did this, putting $16 an hour on the street to encourage the mansion tax.

Measure ULA passed in a snap, and soon Bass and the City Council will have hundreds of millions of dollars a year to build affordable housing and keep people from falling into homelessness. Perhaps this is an opportunity to find common ground on how to address the city’s most pressing challenges.

Political adviser Sarah Angel said Bass could use the concept of calling people out instead of calling them out – listen to what’s on the protesters’ agenda, find some points of collaboration and “encourage respectful dialogue”.

That’s a lot to fit under the tree, but the real Santa didn’t lose his hat, so now it’s time to dream big.

https://www.latimes.com/california/story/2022-12-17/lopez-column-hey-santa-how-about-a-fresh-start-at-l-a-city-hall Hey, Santa, how about a fresh start at L.A. City Hall?

After two decades, it feels right between Argentina and Messi