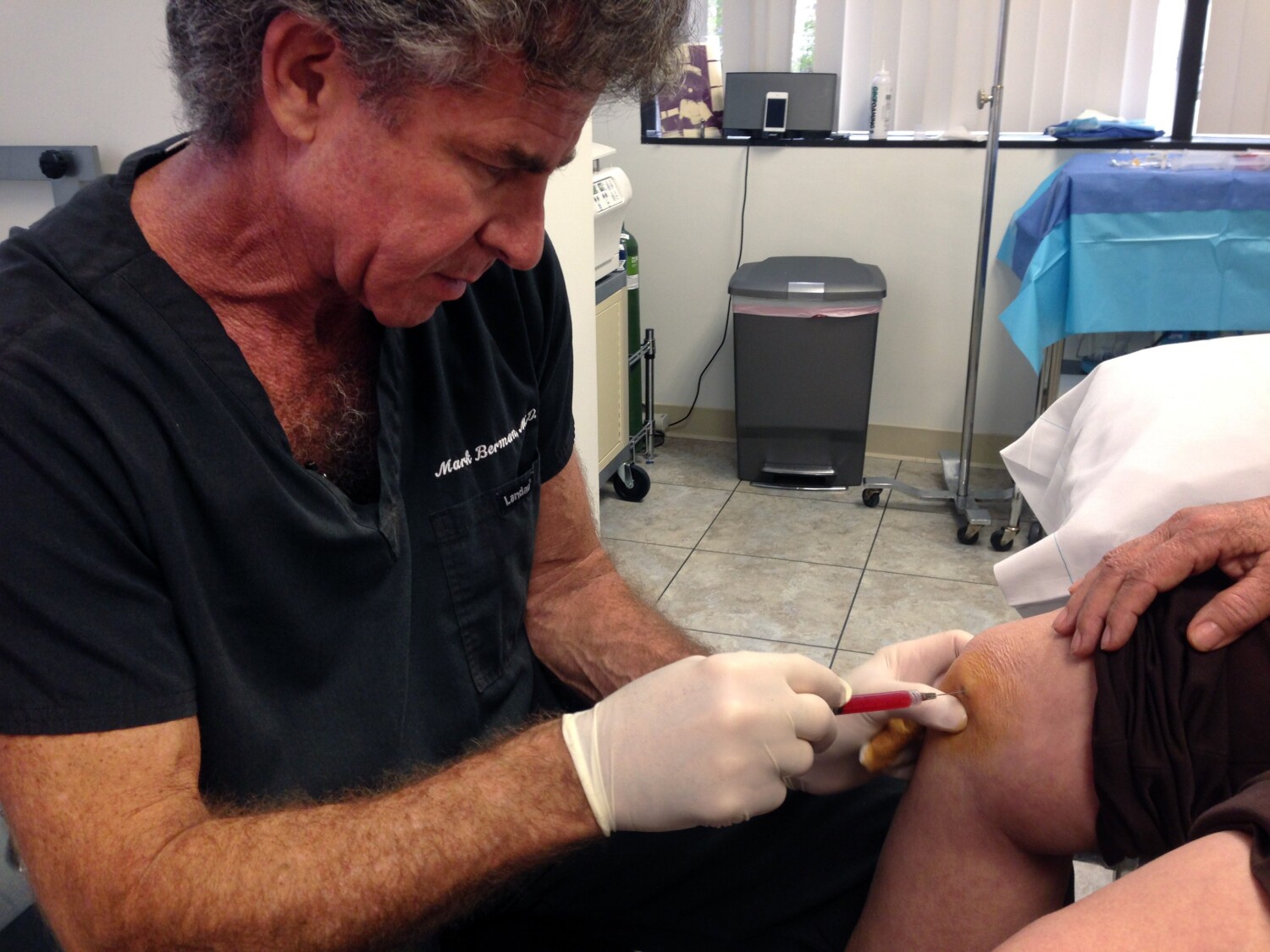 For many years, California-based plastic surgeon Mark Berman has been a healthcare leader in advancing unproven and unapproved stem cell treatments for a variety of medical conditions.

Berman made his claim to what he called the “magic cell” in a book, video that appeared and through a network of affiliated clinics around the country. Those claims have attracted the attention of the Food and Drug Administration, which is trying to stamp out clinics that claim that stem cell injections can treat diseases and conditions like Alzheimer’s and Parkinson’s , autism and even – most recently – COVID-19.

I cannot condone the exploitation of desperate people who believe they will be cured or even helped by a clinic, a pill, or any other purposeful therapy that is not based on reason. science department.

A 2018 lawsuit the FDA filed against Berman, his professional partner Elliot Lander, and two of their stem cell businesses is pending a ruling from U.S. District Judge Jesus Bernal in Riverside. Either way, Bernal’s ruling will set the stage for the next phase of the FDA’s campaign against stem cell clinics — or endorse its position that the injection procedure is like drug administration. illegal drug or interfere with the enforcement of its rules.

Berman died April 19, according to his office. His death has yet to be made public. An email sent last week to a patient and signed by an office manager at the Cellular Surgery Network, which Berman co-founded with urologist Elliot Lander in 2012, said that he died after being hospitalized in early January.

Lander told me via email, “The family will release all pertinent information in an uncompleted and published obituary.” Berman’s son, Sean, confirmed that an obituary is being written.

Berman’s death provides an opportunity for us to revisit the FDA’s campaign against clinics purging bogus stem cell treatments.

The agency’s target is clinics based on a method similar to that advertised by Berman and his colleagues at the California Stem Cell Treatment Center brand clinics in Rancho Mirage and California. Beverly Hills and at certain clinics affiliated with the Cellular Surgery Network. The treatment centers were co-founded by Berman and Lander in 2010.

The method begins with removing fat from a client through liposuction. The fat is then purified to isolate what is known as the “stromal vascular fraction,” or SVF, which Berman claims is rich in stem cells. The SVF is then reintroduced into the client.

Customers of more than 1,000 clinics across the country, some of which are affiliated with the Cellular Surgery Network, have been charged up to several thousand dollars for such procedures, which are rarely covered by insurance. medical pay.

In a 2015 book titled “The Stem Cell Revolution,” Berman and Lander assert that their colleagues in the network are treating “a wide range of diseases” such as Alzheimer’s, autism, cerebral palsy, multiple sclerosis, muscular dystrophy, Parkinson’s, stroke and traumatic brain injury.

Recently, Berman, Lander and other stem cell promoters have implied that stem cells could be used to treat COVID-19.

The FDA’s stance on these claims is clear. The agency found that there was no scientifically validated evidence for those treatment claims. The agency has warned potential clients to stay away from those promoting the claim.

The agency says on its website: “Do not believe hype. “Some unscrupulous vendors offer unapproved and unproven stem cell products,” as well as “potentially dangerous.”

The FDA says it has not approved a stem cell treatment for any condition other than rare blood system diseases, but it has approved a treatment using hematopoietic stem cells. of umbilical cord blood. The agency has specifically cautioned against claims that stem cells could be used to treat autism, macular degeneration, blindness, chronic pain, fatigue; neurological disorders such as multiple sclerosis, Alzheimer’s and Parkinson’s; or cardiovascular and pulmonary diseases.

The agency has also warned against claims, also unproven, that stem cells can be used to “treat or prevent COVID-19, acute respiratory distress syndrome (ARDS) or any other any other complications related to COVID-19.”

In practical terms, however, the FDA’s campaign did not go well. In 2017, the FDA closed a loophole that allowed stem cell clinics to continue to recommend unproven, ineffective, and potentially hazardous stem cell therapies to consumers. Fat-extracted stem cells, the FDA ruled, are drugs by law, meaning clinics need to be licensed and subject to scrutiny.

But the agency has been reluctant to give clinics up to three years to comply with its new regulations. It then extended it by six months because of the pandemic, so its prescribed “ban” period expired on May 31, 2021.

At the time, a flurry of shady activity flooded the field — so much so that the task of protecting the public from them might be beyond the capabilities of the FDA. According to a study by Leigh Turner of UC Irvine, by mid-2021, there will be 1,480 businesses operating 2,754 clinics nationwide.

Last year, Turner told me: “That doesn’t seem like progress. “The problem the FDA faces is four times bigger than it was in 2016. The FDA just has too many employees and too many inspectors. They don’t really have enough inspectors to send them to 1,480 businesses.”

Before his death at the age of 69, Berman and his colleagues studied whether stem cells could be used to treat COVID. During his testimony in federal court, Berman said that the Cell Surgery Network was working with a Florida stem cell company, American Cell Technology, “to treat COVID-19 patients” under a regulatory protocol. treatment that the network has developed, as an FDA trial. briefly filed in June describing his statements from the witness box.

Sean Berman, son of Mark Berman, who says he is an ACT consultant, told me that as far as he knows, no patient has been treated for COVID according to the protocol mentioned by the FDA.

However, Lander seems to indicate that some kind of study has been done. “No patient was charged any fees in our Covid-19 study,” he told me by email.

Details of Berman’s death have yet to be made public.

One person who answered the phone at the California Stem Cell Treatment Center told me that Berman died of “complications from Covid.”

Lander, however, told me: “Any person claiming to be a California Stem Cell agent over the phone is neither knowledgeable enough nor authorized to discuss Dr. Berman’s medical history.”

One patient said Berman’s staff canceled the pre-op procedure in January, saying that Berman had COVID. The patient, who did not wish to be identified, said Berman’s office repeatedly offered to reschedule the appointment, but ultimately the procedure did not take place.

The FDA has been reviewing Berman’s practices since at least 2017. In two July 2017 inspection reports, the agency listed numerous “objective conditions” at Treatment Center facilities. California Stem Cells in Rancho Mirage and Beverly Hills that they claim were infringed. specified standards.

The reports criticized the disinfection procedures, training and record keeping at the sites. At Rancho Mirage, at least four “serious side effects” following stem cell procedures were not investigated by the clinic or reported to the FDA upon request, the agency said.

They included one patient who had a retinal detachment after SVF was injected into the patient’s eye, another patient who was hospitalized with “confusion and headache” and two cases of infection.

Berman and Lander wrote in their book that they found “exceptional safety and no serious side effects associated with SVF implementation.”

The FDA’s most staunch attack on Berman came in a lawsuit filed in Riverside federal court in May 2018, which aims to force him and his facilities to stop treating patients with the drug. liposuction method. The lawsuit is largely similar to the one the agency filed the same day against US Stem Cell, a Florida clinic operator, in Miami federal court.

Both sets of claimants offer similar defenses – mainly they are merely treating patients with their own tissues, so their product falls outside the FDA’s definition of a drug, and therefore exempt from the authority of the agency. The FDA disagrees. The agency argued that the extracted tissues were thoroughly treated prior to recycling, that they were properly defined as a drug and did not qualify for an exemption.

The two lawsuits have followed different paths. In Miami, District Judge Ursula Ungaro agreed with the FDA on a major victory for the agency’s campaign against stem cell clinics.

Ungaro stated in June 2019 that SVF is actually a drug and therefore used illegally. She further observed that U.S. Stem Cell procedures “are associated with a higher risk of infectious disease and other safety concerns and are therefore subject to FDA regulation.” Her decision to side with the agency through a summary judgment — that is, without a trial — effectively closed the American Stem Cell clinic.

Ungaro’s ruling was upheld by the 11th US Circuit Court of Appeals in Atlanta in June.

In Riverside, however, Bernal rejected the FDA’s request for a summary judgment. Instead, he held a seven-day trial in May 2021. Both sides’ post-trial summaries were filed in August, but Bernal has yet to issue a verdict. There is no indication of when he may rule.

Berman’s death will not require Bernal to suspend deliberation, as three other defendants remain – Lander, the California Stem Cell Treatment Center and the Cellular Surgery Network.

The FDA, shortly after the trial in June, issued the appropriate warning that the defendants may be targeting COVID-19 victims, despite a lack of evidence that stem cells have effective in the treatment of disease. Why should that be a surprise? The field of stem cell clinics has mostly nurtured patient despair since its inception.

Berman and Lander write in their book: “Has a doctor ever told you that ‘there’s nothing we can do? “. “We sincerely hope you won’t accept that as the final answer.” In fact, the FDA’s response is: Watch out, because they don’t have the answer either.

Graduate with Down syndrome makes history at Olympia college