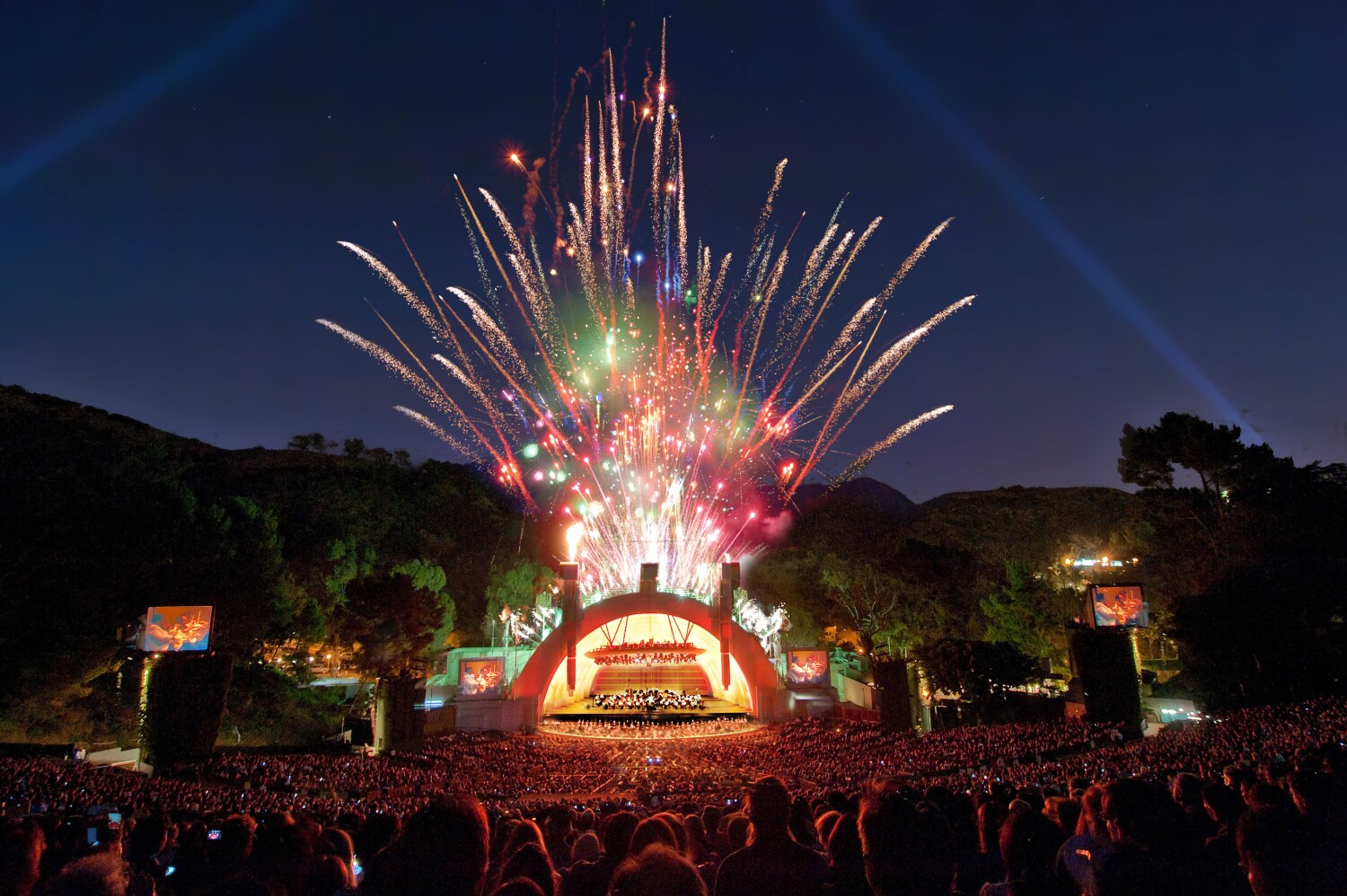 Mary McNamara hit the nail on the head with her column about the Hollywood Bowl Celebration [“It Doesn’t Get Any More L.A. Than Right Here,” June 5].

The only thing missing was the $1 seat cushion rental – the best value in all of SoCal. Our Hollywood Bowl should bow for all its glory days.

I attended a concert there just days after 9/11 and it was just the salve that soul needed.

From Elton John in the ’70s to Gustavo Dudamel today, I’ve enjoyed many nights at the Bowl, always with a picnic.

From the boxes of linens to the top, it’s always a comfortable outing.

The Hollywood Bowl Museum is also worth an hour or two.

Regarding Bob Dylan’s appearance at the Hollywood Bowl on September 3, 1965 [“20 Pop and Rock Moments That Powered the Stage,” June 5]: Although two future members of the band joined Dylan for the rock portion of the show, his European tour with the group would take place the following year, not a few months before the Bowl performance. I was there that night and the audience was not audibly polarized. Few of those present would not have known that he would be playing with a rock band; He had already released an album of electric backing, and audience reaction to his electric performance at the Newport Folk Festival was old news.

He also had a hit record playing on LA rock stations all summer long.

Still, it has to be admitted that the show lacked the sparkle that future Bowl cast members would offer. For the final song of the night, after some group discussion, Dylan stepped up to the mic and asked, “Anyone have a C harmonica?” Apparently one spectator did, and one ended up on stage. After surprised laughter from the audience, Dylan picked it up, tucked it into the rack around his neck and launched into the Top 40 hit “Like a Rolling Stone”.

The selection of Hollywood Bowl concerts over the years reminded me of one I attended on a glorious October night in 1963. The headliner was Sammy Davis Jr. The second act featured an aspiring singer with an unusual spelling of her first name, Barbra Streisand. The third performer was the jazz immortal Dave Brubeck.

How happy I was to be part of this great concert. Could there ever have been a greater one in the history of the bowl?

Mention of “Sound of Music Singalong” [“Joyful Musical Salutes to the Past,” June 5] reminded me of Rodgers and Hammerstein nights at the Bowl in the late 1950’s – lovely performances with soloists, ensembles and the orchestra performing well-known songs and rarities from their many musicals.

I would like to thank theater critic Charles McNulty for his column on the timelessness of Anton Chekhov’s plays [“Really Makes You Stop To Think” June 7].

McNulty’s analysis was instructive about the current revival of Chekhov’s plays being performed and his influence on films and novels. I have been reminded of how much his plays and stories have touched me in the past and my interest in his work is renewed.

Lost and found and restored

That being said, I’m curious if David Van Auker, who found the artwork, received any compensation for his “ownership” of it.

As far as I know, he was in possession of a stolen piece of art. However, he was obviously not involved in the theft either and he did the right thing by reporting it when he realized it could be the real deal. More generally, is there any law covering such situations, the recovery of stolen goods from a subsequent owner of the goods who received them innocently of their status?

Where has art reporting gone?

For many years, loyal readers of The Times could count on receiving listings and reviews. No longer. Art groups need an audience, and the audience needs a source of relevant information. Los Angeles is a vibrant arts city, but you might not guess it if you’ve read The Times recently.

My guess is that ticket buyers for the LA Phil, LA Opera, Music Center, Wallis Center, dozens of small theaters, museums, galleries, and countless other art venues are current or potential subscribers.

Could this be another reason to give up Times subscriptions the same way most people gave up landlines? Do I have to turn to the New York Times to find out what’s happening in our own backyard?

These films don’t just make themselves

I totally agree with the letter writer who complained about the lack of credits for shows [“Hollywood’s Last Movie Star, or Not?,” June 2]. Some channels squeeze them so they can’t even be read on my 55 inch screen. Netflix lets you decide if you want to watch them, and only if you’re quick enough to click that choice. Oddly, I first saw squashed credits on PBS many years ago. At that time I wrote and complained. I like to know the names of the stars or even the supporting actors, directors etc. I particularly like the way some films from the 1930’s show the actors’ names over pictures of them in the role at the beginning of the film.

I can’t read the credits in cinemas because they are blocked by people leaving the cinema. Yes, we still have movie stars, but the way credits are ignored makes it harder to figure out who they are if you don’t already know them.

Disclosure: My late husband, Biff Elliot, was an actor — which interests me more than most — but I read the credits as a teenager.

https://www.latimes.com/entertainment-arts/story/2022-06-10/calendar-feedback-sunday-june-12 Hooray for the Hollywood Bowl and other reader feedback

Ben Stiller takes us inside that wild ‘Severance’ finale