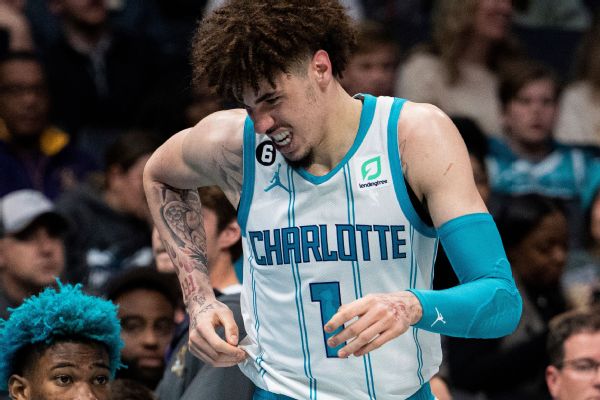 CHARLOTTE, NC — LaMelo Ball’s first home game of the season didn’t go nearly as well as he had hoped.

Not only did the Charlotte Hornets lose 125-113 to the Indiana Pacers on Wednesday night, but Ball injured his left ankle again when he stepped on a fan’s foot with 1 minute and 34 seconds left.

Ball was trying to save a ball from going out when he stepped on the foot of a seated fan near the Hornets bench as he tried to steel himself from walking into the crowd.

It’s the same ankle that caused Ball to miss part of the preseason and the first 13 games of the regular season.

Hornets coach Steve Clifford had no immediate information on Ball’s status, and Ball was not made available to speak to reporters after the game.

The Hornets are in Cleveland on Friday night.

This was Ball’s third game since his first ankle injury last preseason, but his first at home. It started with him getting a big introduction from the PA announcer and a huge round of applause during the pre-game introductions, but exiting with a grimace on his face as he hobbled into the locker room.

Ball was outstanding when he played, finishing with 26 points on 10-of-17 shooting, including five 3-pointers. He also had six assists while turning the ball over four times.

“He was great tonight,” said Clifford.

The Hornets have been hit hard by injuries this season.

Along with Ball, who has missed 13 games, Cody Martin has missed all but one game with quad and knee problems that eventually required surgery, Gordon Hayward has the last eight games with a shoulder injury and Dennis Smith the last three with a sprained ankle lost. Earlier in the day, the Hornets also announced that first-round draft pick Mark Williams suffered an ankle injury while playing for the G League’s Greensboro Swarm.

“It’s very tough, but we have to be professionals,” said Hornets guard Kelly Oubre Jr. “It’s the basketball game and things like that happen. But we have people who are fit and healthy enough to go out there to fill that gap.”

Still, forward PJ Washington said he’s looking forward to the day when the Hornets (4-12) are in full strength.

“We all know everyone’s going to get out of there eventually, and we can’t wait,” Washington said. “But right now the problem is that we’re losing games, so we have to figure it out and start getting some wins.”

Charlotte (4-12) has lost nine of her last 10 games after starting the season 3-3 with a win over reigning NBA champion Golden State Warriors.

As Sean McVay enters marriage, will he be wed to Rams long?

Chargers vs. Texans: Betting odds and picks against the spread

“He is just an absolute revelation”