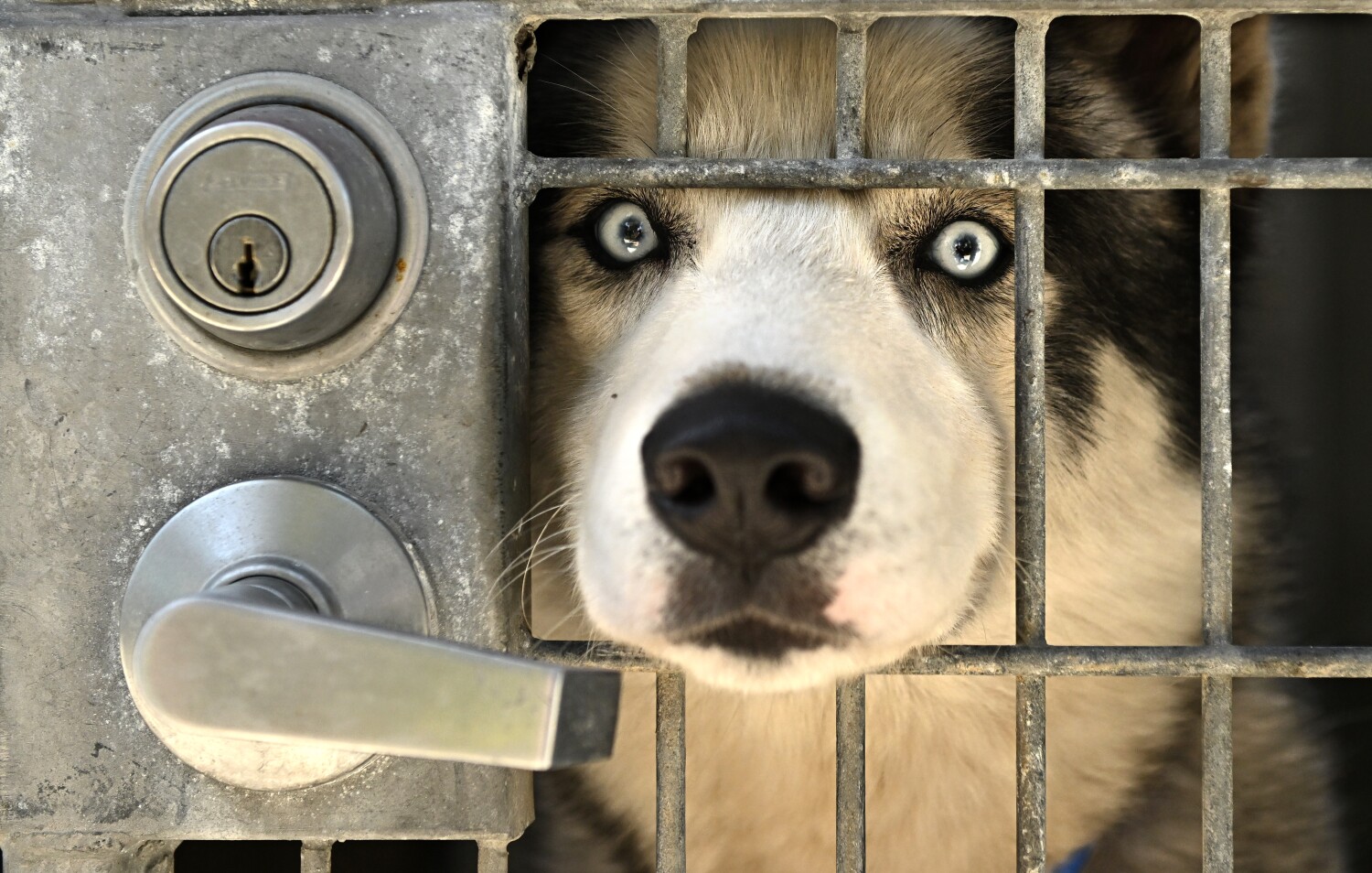 Two LA councilors on Friday called for more resources for the city’s struggling animal shelters after an article in the Times reported on overcrowded kennels, shelter dogs going weeks without a walk and staff shortages.

“Angelenos deserve the services we pay for,” said Councilman Marqueece Harris-Dawson, whose South LA Borough includes the Chesterfield Square Animal Services Center. “We expect animals to be treated humanely and we demand that the city do better.”

Chesterfield Square is the busiest of the city’s six animal shelters and is home to about 300 dogs, some of whom are locked away for long periods. The city relies on hundreds of unpaid volunteers to walk and exercise the dogs, but the volunteers say they can’t keep up with the influx of animals.

At the same time, the shortage of staff is a burden on the department. Animal Services lost more than 20% of its workforce to a program that encouraged older city employees to retire. It was launched in the first year of the 2020 pandemic, when it wasn’t clear federal funding would be available.

Councilor Bob Blumenfield, who represents the western San Fernando Valley, said he was “appalled” to read about the conditions at the shelters. “My heart breaks for the animals,” said Blumenfield, who said his family fostered and adopted dogs from the shelter.

Blumenfield questioned why more “red flags” weren’t being raised over the shelter’s challenges.

Still, members of the public regularly call meetings of the Los Angeles Animal Services Commission, made up of representatives from Mayor Eric Garcetti, to complain about conditions at the shelters, including the dogs’ lengthy confinement.

And in May, an employee at the San Pedro municipal animal shelter emailed supervisors to alert them to overcrowding issues, including dogs housed in shower stalls and wildlife cages.

“We should be able to deal with that as a city,” Blumenfield said. “We have the resources and we have the know-how.”

He said the city shouldn’t be in a position where its dogs are “kept in shower stalls and not taken for walks.”

Blumenfield, who was critical at the time of the city’s pension program because he feared a large layoff, also said the department needs more staff and better technology will make it easier for the public to volunteer and adopt animals.

Harris-Dawson also said the neighborhood surrounding the shelter is “filled with people who love pets and are willing to put in their time to make a difference.” If Animal Services works with the local community, they will show up.”

KTLA reported Thursday that Claudio Kusnier, a volunteer at the West Valley Animal Shelter, was suspended after speaking to the news outlet about conditions at the shelter.

Kusnier told KTLA that shelters must remain open after 5 p.m. to allow more people to volunteer. At one point — Kusnier was also interviewed after the suspension — he blamed the “mismanagement” department for the loss of two key employees who recently left. Both employees now work at other animal service agencies.

Jean Sarfaty, a former 911 city operator who volunteers at the West Valley shelter, told the Times that she was also suspended after speaking to the media on Thursday. She said she was told she was suspended for giving an interview without permission. She was also wearing an Animal Services t-shirt at the time.

“I didn’t say anything negative,” Sarfaty said. “I said that city employees work hard and that volunteers help do the things that city employees don’t do because they don’t have time.” The Times was not immediately able to get comment from Animal Services on Sarfaty’s account receive.

Agnes Sibal, a spokeswoman for Los Angeles Animal Services, said the department does not comment on “personnel or staffing issues.”

Sibal also appeared on CBS2 this week and said the dogs are being cared for, although some may not be walked for weeks.

“All the dogs in our shelters actually get daily enrichment,” Sibal told the news channel. “It doesn’t necessarily mean that they go for a walk every day. However, you do get some form of exercise and interaction with volunteers or staff.”

When asked what exercise the dogs get each day, Sibal told the Times that the animals get enrichment activities.

“Dogs get exercise through canine enrichment by engaging in activities designed to stimulate their minds while keeping them active,” Sibal said.

“Enrichment activities are daily and vary from day to day and can take place outdoors through playtime in the yards or walks or in their kennels when receiving their daily treats from staff/volunteers; get Kong toys with treats inside; or when they’re enjoying frozen treats in hot weather,” Sibal said.

Other activities include blowing bubbles for dogs to pop and hunt and read to the animals, Sibal said.

She also said city staff enrichment activities may not be reflected in logs.

Thomas Kalinowski, a former Animal Services supervisor, one of the staff who recently left the department, said he has personally interacted with dogs that have not been out of their kennels for weeks or months.

“We need to face the facts – we need more dollars for staff and facilities because relying on the goodwill of volunteers and private, one-off donations from pet-loving celebrities is clearly not enough,” Long said.

Councilman Paul Koretz, chairman of an animal welfare committee, has called an emergency committee meeting next week to discuss conditions at the shelters.