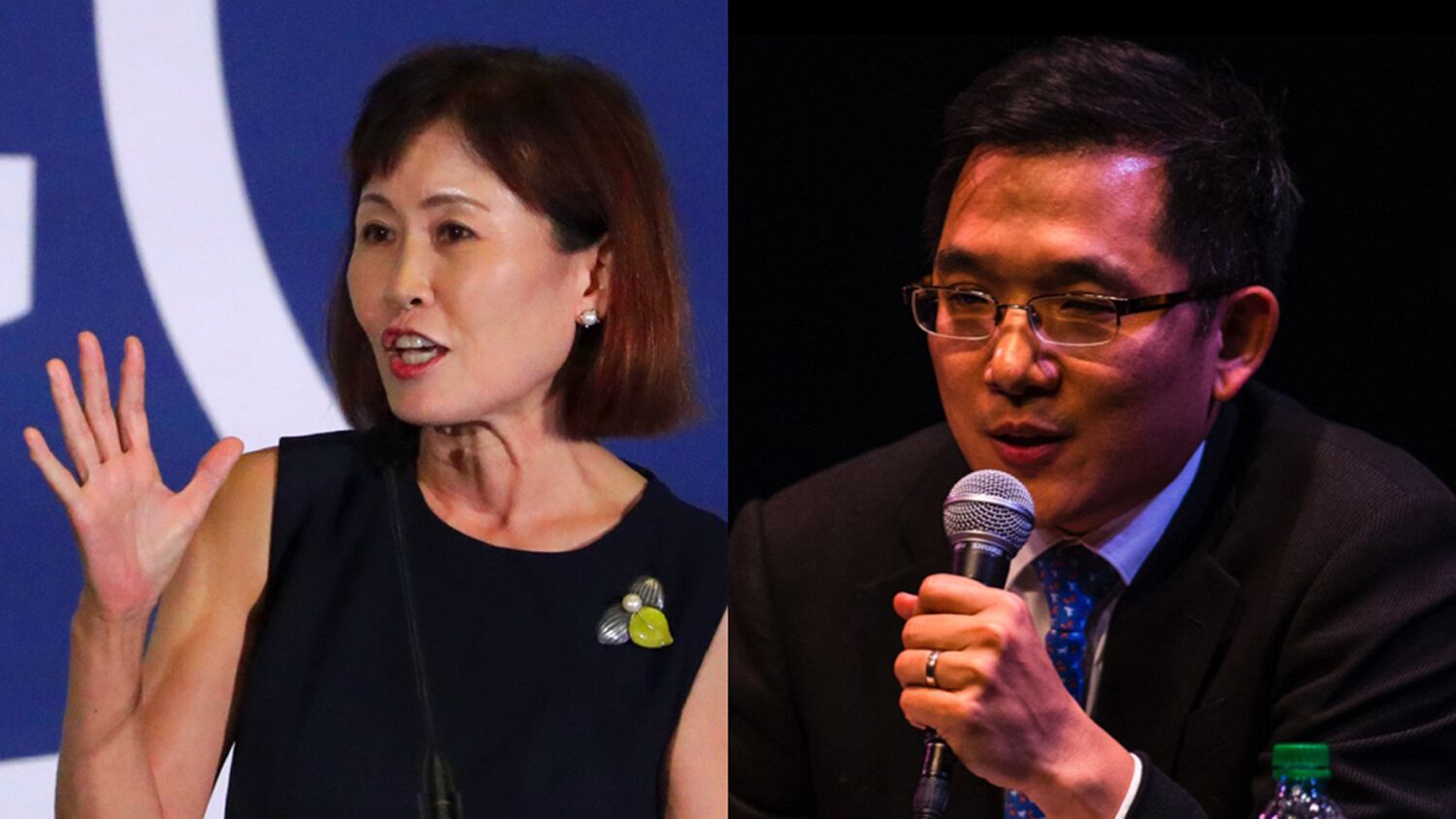 The campaign flyer sent to Orange County Vietnamese-American voters is heavily manipulated and destined to ignite. A Democratic congressional candidate is photoshopped in front of a classroom of children, holding a copy of the Communist Manifesto.

Pictures of communist icons Mao Zedong, Vladimir Lenin and Ho Chi Minh hang on the wall. (Bernie Sanders, who describes himself as a Democratic Socialist, is also up there.) A single fist in the Black Power Salute teaches students number one. Two is symbolized by hands holding a hammer and sickle.

“Jay Chen invited China to our children’s classes” is written on the blackboard in Vietnamese.

The flyer, created and funded by GOP Rep. Michelle Steel, would have an impact across much of the country. But it has the potential to be especially strong in Steel’s Orange County center. She is running for re-election in the new 45th congressional district, which has an Asian-American plurality. The district is home to the largest concentration of people of Vietnamese descent outside of Vietnam — and portraying her Democratic rival as a communist sympathizer could give Steel’s campaign a big boost.

“Within the AAPI community, particularly among the Vietnamese, there is a well-known and long-standing fierce opposition to Communism. Because of this, many Vietnamese settled in the United States after the Vietnam War,” said Tom K. Wong, associate professor of political science at UC San Diego.

“If there’s a rumor that a candidate has ties to a previous regime, that an AAPI community fled, it can be incredibly damaging,” he said.

Chen, the son of Taiwanese immigrants, called the flyer “ridiculous.”

“I found it really absurd and also really dangerous how she exploits the fears within the immigrant community for political ends,” he said.

Chen pointed out that his grandmother fled communist China and that he was a reserve officer in the Navy with top-secret security clearance.

“This is red bait as a Taiwanese-American is accused of bringing Maoist thinking into American classrooms,” said Long T. Bui, associate professor of global and international studies at UC Irvine. “None of this is part of Chen’s educational platform.”

The flyer highlights a vote Chen cast in support of a program known as the Confucius Institute more than a decade ago when he was a board member of the Hacienda La Puente Unified School District. The Beijing-backed language and culture learning centers were popular on campuses across the country at the time, but have come under scrutiny in recent years and are now seen as the Chinese government’s propaganda arms.

Before the June primary, Steel attacked Chen for supporting the program; Chen raised funds from the claim and called Steel’s words “racist.”

The mailer also includes the Democratic donkey symbol, an Antifa flag, and a drawing of a black kid standing on the highest stack of books to be on the same level as two white kids under the word “Equity.”

Such symbolism, as well as the black power fist, “obviously opens up current hot-button issues to mobilize far-right conservatives,” Bui said. “They are included in the flyers because they all fall under this common fear that California and the United States are becoming a socialist-liberal paradise.”

The Steel campaign countered that the flyer provides important information to voters when deciding who to support in November’s election.

“With the ever-growing threat posed to America by China, it is imperative that voters know where their congressional candidates stand on this issue, and Jay Chen’s personal ties with China are deeply concerning,” said Lance Trover, a spokesman for Steel. “The State Department has said [the Confucius Institute’s] Mission is to advance Beijing’s global propaganda, and at a time when nothing is happening unanimously, the US Senate voted 100-0 to increase oversight over them [Chinese Communist Party]-funded institutes.”

The new 45th congressional district was created last year during the decennial post-census redrawing of district boundaries. A priority for the independent body that drew the lines was to create a district that would empower the region’s Asian American voters.

Democrats have a 5-point lead on voter registration in the district centered on Orange County’s Little Saigon community. A third of the district’s voters are Asian Americans, and half of them are of Vietnamese descent.

Despite the democratic advantage, the race will be decided by voter turnout. In the June primary, Steel and another Republican received nearly 57% of the vote, while Chen received 43%.

Steel, a Korean-American, has forged ties with the region’s Vietnamese community during her time in county, state, and federal offices.

Anti-Chen brochures landed in his mailbox, Vo said. “I can’t verify the facts, but what matters is who qualifies.”

Part of what draws him to Steel is her heritage. “To be born [South] Korea, she understands the situation in North Korea and how unstable it is for our security… She recognizes the threat Communism poses to the world,” he said.

Chen has also courted the Vietnamese-American community: he helped cut a cake at the 30th anniversary celebration of the Viet Bao Daily News, a Vietnamese-language publication; attended veterans’ groups and celebrated the Autumn Moon Festival.

Steel used similar anti-Communist messages in her successful 2020 contest against incumbent Democrat Harley Rouda. Their campaign sent out a flyer showing Rouda along with a stylized image of a beaming Mao and text claiming that Rouda’s anti-China voting record was not tough enough.

The Viet Bao Daily News wrote that it had received questions from community members about the anti-Chen mailer and published a fact check by an unnamed reader on Wednesday.

Among the demands the reader flagged as misleading was a statement on the back of the leaflet that said Chen attended Peking University, the same school as Chinese Premier Li Keqiang. The writer says that while at Harvard, Chen received a scholarship to study Mandarin at the university in China, which was founded in 1898, “more than fifty years before the communists took over China. This is the oldest and most famous university in China, a “Harvard of China”. ”

Supporters of both candidates agreed that the flyer appealed to the deep resentment of many Vietnamese Americans towards Communism.

The Fountain Valley resident fled Vietnam alone by boat in 1979 at the age of 14. He spent a year in a refugee camp in Malaysia before the American government brought him to Orange County. Such experiences, as well as the current tensions between Vietnam and China over the South China Sea, are shaping community politics, Nguyen said.

“Smearing his name because he somehow supports Red China on Communism is a very dirty tactic, I think,” Nguyen said. “Michelle knows that labeling someone a communist sympathizer will strengthen her position. She knows she’s using it inappropriately.”

Businesswoman Linda Nguyen, a Steel supporter who said she was in her 40s, said it doesn’t matter whether the flyer linking Chen to communism “has evidence or not.”

“It’s an effective way to reach out to the older Vietnamese,” she said, sipping hibiscus tea at Little Saigon in Westminster.

But some undecided voters are upset by the negative campaign.

Minh Pham, who shopped for coffee and tofu near his home in Westminster, is still trying to decide which candidate deserves his vote. He’s been watching videos of their speeches and plans to read more about their platforms.

“The ads shouldn’t be about allegations,” said Pham, who would only say he’s in his 80s. “You should focus on someone’s personal records. Look at what that person has done in the past and compare it to what they can do in the future… Everyone tries to use communism as a hook. That’s not always the solution.”

AMC's Long-Running Show 'The Walking Dead' Comes To An End After 12 Years!

USC vs. Arizona State: Three things to watch for Saturday