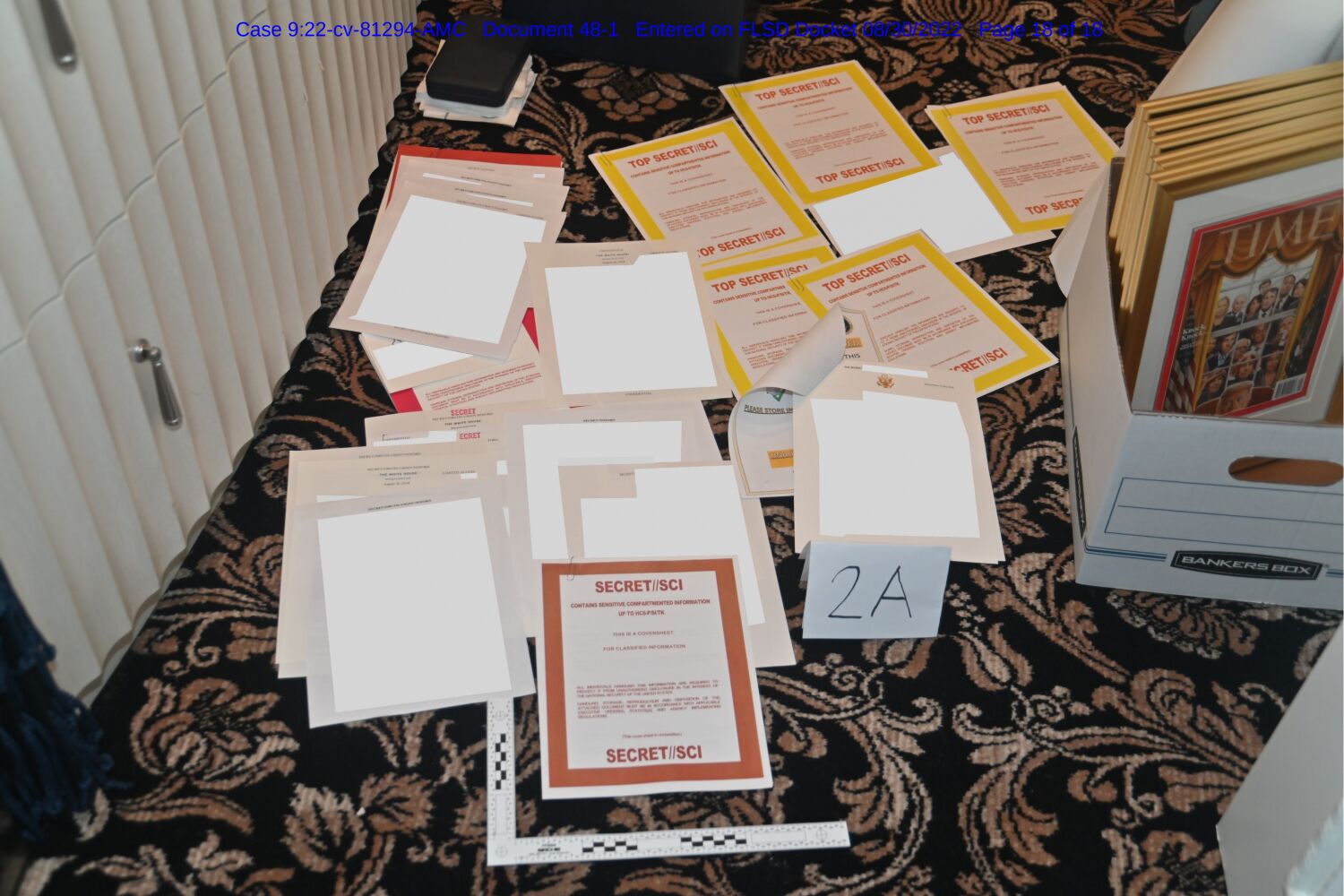 At least 300 documents containing classified information left the White House with former President Trump, an unprecedented situation that has led to the FBI investigating possible violations of the Espionage Act and obstruction of justice.

The documents, recovered by the National Archives and FBI over the course of two years from the former president’s Mar-a-Lago estate along with more than 11,000 other nonclassified government records, include some of the government’s most highly protected secrets, such as information from spies and informants.

Now, details of the documents’ removal and haphazard storage revealed in the days following the Aug. 8 court-approved search of Trump’s home have left the intelligence community reeling and the public asking: “How could it happen?”

“Something horribly failed… at Trump’s White House for him to have walked away with all these documents without somebody raising an alarm before he left,” said Larry Pfeiffer, a former high-ranking CIA officer in the George W. Bush administration and former senior director of the White House Situation Room in the Obama administration.

The process of getting records back for preservation when a president leaves office has been honed over decades. The power rests in the hands of the White House staff secretary, who is tasked with making sure the president has the information needed to be prepared for every conversation and decision he’ll have to make each day — and with the responsibility of getting the records back.

“The thing people may not realize is just how highly organized this process has become,” said Rep. Sean Patrick Maloney (D-N.Y.), who was staff secretary for the final months of President Clinton’s second term.

“I don’t think most Americans would understand there is an office in the White House, and the entire focus is preparing specific items for the president every day for certain scheduled times [so] the president can make decisions, receive information, get what he or she needs to do the job.”

The staff secretary is typically the main point of contact for all communications to the president’s office and leads a staff of more than100 people to ensure the president has the materials needed for all meetings and discussions. They almost always have code-word clearance to handle the country’s most closely guarded secrets, and the authority to determine what information makes it to the president’s desk and what to delegate to someone else.

Trump’s first staff secretary, Rob Porter, resigned in 2018 after allegations of domestic abuse against him became public. He never obtained a full security clearance, and the White House never said how he did the job without it. Handling and tracking classified documents might have been delegated to lower-ranking officials who did have clearance.

Trump’s second staff secretary, Derek Lyons, resigned in December 2020 and was not replaced. He did not respond to requests for comment.

“There are very capable, highly trained, nonpartisan people who help the staff secretary organize this mountain of paper that has to go to the president and we put together a well-organized stack of materials, each in its own color-coded folder and that goes up to the Oval Office at certain times that are set or that are based on the schedule, and then that material comes back,” Maloney said.

Staff members log every folder and its contents when it goes to the president and again when it is returned. Items are stamped in red to note that the president had seen it, Maloney said.

Classified materials are handled even more delicately, with the National Security Council executive secretary also tracking them because they need to be stored securely or immediately returned to the Sensitive Compartmented Information Facility. Commonly called a SCIF, the facilities are a secure place where sensitive information can be viewed and discussed to prevent outside surveillance or spying. The staff that compiles the presidential daily brief is also responsible for tracking down any materials not returned with the briefing book.

“The idea that there would be classified materials going into the Oval and no record of what happened to them is not a world in which I lived,” Maloney said. “That doesn’t make any sense to me. It’s irresponsible. It’s completely inconsistent with the way a White House should work.”

For so many precautions to fail comes down to one thing, Maloney said: “It’s because the president breaks the rules and there’s no one there to call him on it.”

The log outlining the documents that the president saw and returned traditionally goes to the National Archives at the end of an administration. If Trump’s staff maintained the log, the government could use it to help determine what documents went missing and when.

It raises questions not just about how long the classified materials were in the boxes, but how long the boxes might have been improperly stored in a location without sufficient security measures at Mar-a-Lago, which is also a resort that draws thousands of visitors a year from around the world.

The Justice Department disclosed Friday that the FBI’s nine-hour search of Mar-a-Lago found 42 empty folders marked “return to staff secretary/military aide.” Pfeiffer said that is a strong indication the standard staff secretary processes were still in place for at least some time while Trump was in office, even if they weren’t followed.

“Clearly there’s a process in the White House. That process existed in the Trump White House, where documents that went to the Oval Office or the president were to be returned for recordkeeping purposes. And clearly, it appears that wasn’t happening,” he said.

The FBI search recovered more than 100 documents classified as secret, top secret or confidential in that search, according to the inventory. The National Archives previously found classified documents when it recovered 15 boxes of presidential records in January. Trump’s team also turned over some classified documents in compliance with a grand jury subpoena in June. A federal judge approved the search when presented with evidence the FBI collected from multiple sources indicating not all classified materials had been handed over as required.

On Tuesday, the Washington Post reported that the recovered materials included information about a foreign nation’s nuclear capabilities that few in government have authority to access.

Classified and sensitive information routinely appears on paper within the White House. Part of the reason is security — outside technology cannot be brought into secured areas such as the situation room. It also depends on what the president prefers: Obama was the first president to get the daily briefing on a tablet, while Trump preferred paper copies.

Also a factor is the nature of a bureaucracy that has worked on paper for hundreds of years and is slow to change.

Most of what the president sees and touches becomes a presidential record and has to be preserved for eventual public use under the Presidential Records Act of 1978, which defines any historically relevant materials created by or for the president, such as letters from foreign leaders, logs showing who called the Oval Office, schedules, notes from meetings and draft speeches. Normally the staff secretary’s team would file the materials for later preservation once they are returned. Classified information would be secured in specialized safes, the SCIF or returned to the agency that created it. Copies that weren’t marked with notes by the president or his staff might also be placed in burn bags and destroyed.

Intelligence agency officials presenting classified information to the president at the White House would feel compelled to say yes to a request from the president to keep information shown to him, said Jeffrey Fields, a former senior advisor in Obama’s Defense Department and an analyst at the State Department. At that point, responsibility for its safe handling became the White House’s responsibility, he said. Fields said he lived in constant fear of leaving a classified document unsecured — on a desk overnight, for example.

“I would always think and assume that in the White House it was an even tighter ship, that they would have the most robust controls over where that material is at at all times. And it seems like this was just the opposite in the Trump administration,” Fields said.

Presidents receive their first lesson on proper handling of classified materials immediately after being named their party’s nominee, often as part of a conversation with a high-ranking official in the intelligence community, like the director of National Intelligence, before receiving their first intelligence briefing, Pfeiffer said. Staff also goes through similar training when they are hired.

The staff secretary, chief of staff and National Security Council officials routinely remind the president about properly handling classified documents, Pfeiffer said, especially if the president wanted to take them to the residence or with him as he walked the White House grounds.

“I cannot fathom that after four years in office, he didn’t understand what the rules were with regard to how classified material should and shouldn’t be handled,” Pfeiffer said of Trump. “I mean, he’s surrounded by people who are constantly dealing with this material in a very protective manner, and he would have to be oblivious to not know the rules.”

In the past, even if the president asked to hold onto information, White House staff would nudge him repeatedly to get it back. The valets in the residence frequently brought folders back to the staff secretary for preservation if it appeared Clinton was done with them, Maloney said. At the end of the work day, staff typically went through the building to make sure that classified materials were properly stored or copies destroyed, and that storage safes were locked.

There were indications throughout the Trump presidency that document due diligence wasn’t being followed. In 2018, Politico published a profile of the two staffers tasked with Scotch taping Trump’s records back together because he routinely shredded documents when he was finished reading them.

While in office, the president is responsible for preserving his records, and all of them are supposed to be over to the National Archives by the day he leaves the White House under the Presidential Records Act.

The law includes a process for the president to work with the National Archivist to determine what is a personal record that belongs to him, such as diaries, journals and medial records, versus what is a presidential record.

Several presidents have left the White House with a few things that don’t belong to them, such as gifts from foreign leaders, and the National Archives had to retrieve them. Usually the situation is treated as a misunderstanding and the items are returned.

Pfeiffer said he isn’t aware of any precedent for a president taking home classified records, much less as many as those found at Mar-a-Lago.

During court arguments last week over whether to appoint a special master to review the materials taken during the FBI’s search, Trump lawyer Jim Trusty compared Trump’s refusal to return documents to the National Archives to an “overdue library book,” adding that the ongoing dispute “has been transformed into a criminal investigation.”

That Trump refused for months to return the materials is what makes this incident so unusual, said Kel McClanahan, executive director of National Security Counselors, a Washington-area law firm that specializes in national security law.

“Even if it was an accident, accidents get corrected. This did not get corrected,” he said. “This got caught.”

https://www.latimes.com/politics/story/2022-09-08/why-were-americas-secrets-on-paper-its-complicated How did so many of America’s secrets end up at Mar-a-Lago?

At least 1 person dead in crash