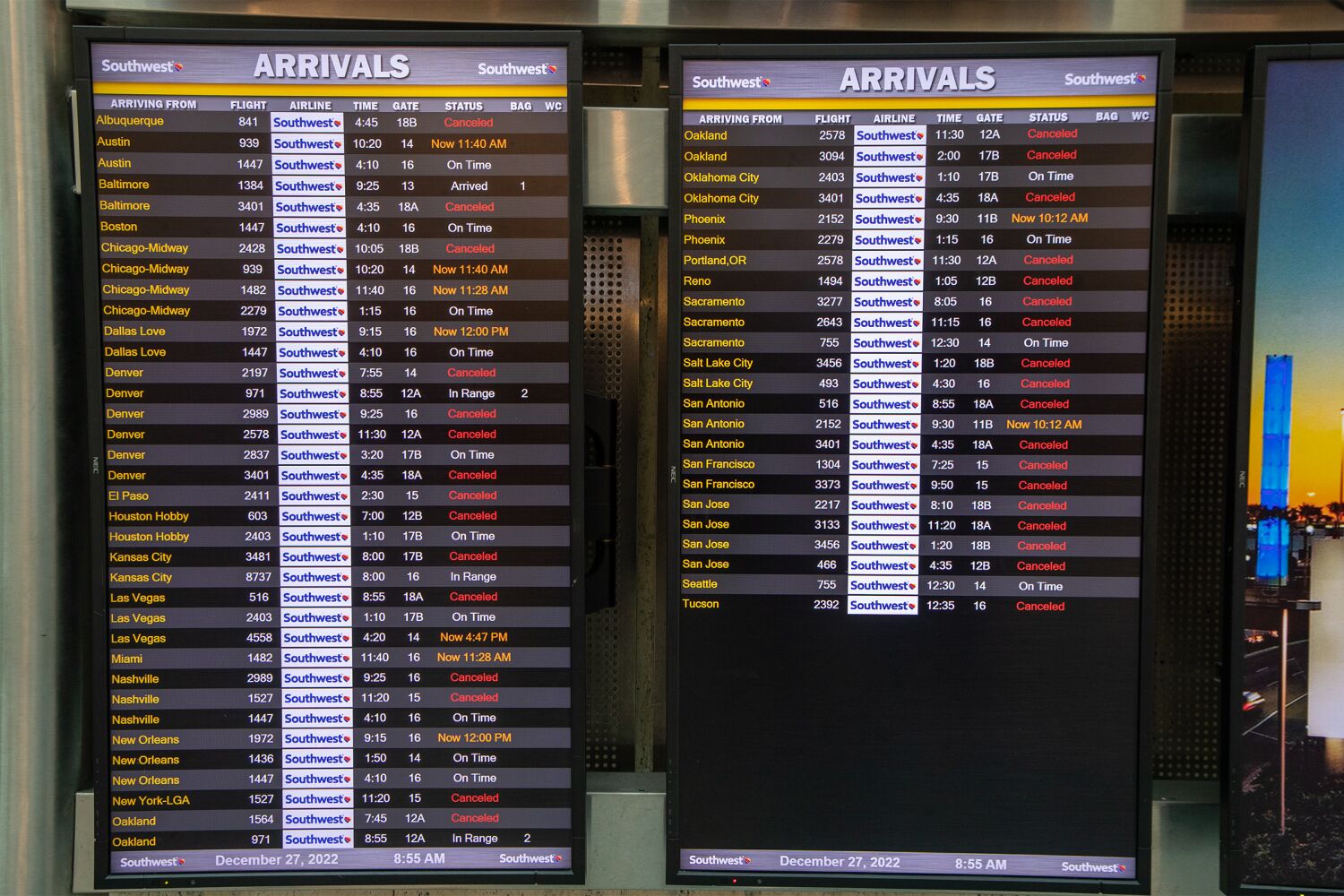 I got lucky when our flight landed in Dallas.

It was December 21, and meteorologists were predicting a winter storm that we later learned would kill more than 50 people.

My parents picked my wife and I up after our Southwest flight from Burbank landed on time at Dallas Love Field. Our four pieces of luggage – checked in for free! — arrived safely full of Christmas gifts. The hardest part of the day was figuring out how to get out of the airport parking garage.

The next day, when the wind chill was 14 below zero, we were cozy and safe at my parents’ house in rural Oklahoma. We spent the following week visiting families we hadn’t seen since the COVID-19 pandemic. We had a very fun time, losing to my cousins ​​at dominoes and taking part in our family’s annual (cutthroat) Dirty Santa game.

So many families weren’t so lucky.

According to the Associated Press, Southwest has canceled thousands of flights likely affecting well over 1 million passengers.

Reports of stranded travelers who say their flight may not be rescheduled for days, children sleeping on the airport floor and sobbing passengers unsure of when they will exit the terminal were a tongue-in-cheek Christmas present from the airline, which announces its passengers to love, has a heart. sculpted logo and is traded as LUV on the New York Stock Exchange.

All was well for us until Tuesday when around 3am I received four text messages from Southwest informing me that our flight from Dallas to Burbank the next day was cancelled. There was a link to reschedule which I realized after my first cup of coffee.

My wife and I rushed to the Southwest website where Southwest informed us that if we didn’t want to pay fees we would have to fly from the same airport (Dallas) but could fly to multiple airports in Southern California.

First we checked Burbank, where there were no flights for days.

We noticed a few options available at LAX on Saturday, but wanted to check out the rest of the airports just to see if anything was available earlier. In those few minutes—when we briefly considered having one of our friends pick us up from Santa Barbara, only to realize there were no flights available there—LAX flights were gobbled up. A few random error messages later (who knows why) we had a flight to Long Beach on Saturday.

When I told my friends about this, one said, “Oh my god, the Long Beach airport is like a vacation in itself,” noting its “luxurious outdoor spaces.” A more cynical person might snarl at such an observation, but I appreciated the silver lining.

After my brother died of brain cancer in 2018, I reassessed my life priorities and started practicing gratitude more consciously. When I’m upset about something but realize I might be being unreasonable, I often jot down three things I’m grateful for. It almost always provides a mood boost.

And so was my approach from Tuesday to Saturday when our trip to my parents’ house was involuntarily extended. Located in a rural area, it’s a 20-minute drive — because of distance, not traffic — to anything beyond cattle pastures, churches, natural gas drilling sites, and a supermarket.

The best news was that our 6 year old niece would be with us for the days we hadn’t planned, which was an unexpected blessing. The sun came out, and we spent our days running around the garden pretending to be magicians, visiting our family’s lake, and playing with my parents’ pets, including the two kittens who basically died earlier this year were abandoned on their doorstep. One night we played a board game where we threw fake burritos at each other. The niece liked this and was pretty good at tagging my mom.

These are the memories we had to create because of Southwest’s failure. But for those stranded across the country, how many missed their grandparents’ last Christmas? How many have missed a baby’s first vacation? These are precious family memories, often documented in multi-generational photos. How many families will have missing family album pictures from this holiday season?

It’s possible to be grateful and angry at Southwest – two things can be true at the same time.

While we were in the Dallas area we found a truly epic playground in Plano where our niece organized an obstacle course which I was told I would participate in (I lost by falling off a log into the lava). We visited our favorite vegan restaurant where our niece stole most of the sundae we ordered.

Yes, we made even more memories with our favorite kid on the planet, but my wife also missed three days of work at her hourly job. Since the Saturday flight was so early, our family had to book an Airbnb – more money we didn’t want to spend. And we were genuinely stressed about trusting Southwest when it promised it would return to normal operations on Friday.

When we arrived at Dallas Love Field around 5:30 am on Saturday, we encountered a sizeable crowd. We joined the growing line at the outdoor check-in after looking in and seeing at least dozens of people already waiting in line to check their (still free) bags. I squeezed my wife’s hand when I noticed her face getting more anxious. “We’re coming home,” I assured her, hoping I was telling her the truth.

We made it through security around 6:15am and landed in Las Vegas around 8:05am. We stayed on the plane while everyone else left and were among a dozen or so passengers who stayed on for the next flight. At one point the plane lights flashed and I thought, “Not today, Satan.” I tried to nap for the 45-minute flight home, but my mind was too busy.

I got lucky when our flight landed in Long Beach.

https://www.latimes.com/california/story/2023-01-02/how-a-southwest-canceled-flight-reminded-me-to-practice-gratitude How I survived the Southwest Airlines meltdown

The 8 signs of autism in women that most people miss

Of Sharks and Samaritans – WSJ