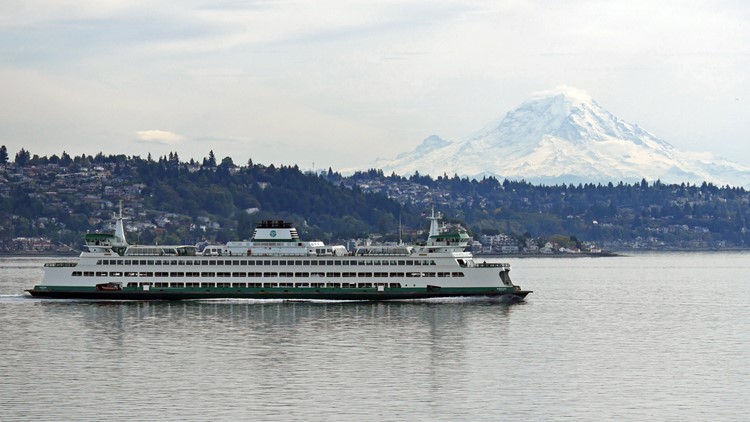 From a Lake Union start-up to the Washington State Ferries system, the Puget Sound region is proving to be a leader in the electrification of water transportation.

SEATTLE – A water-sculpted city is the inspiration for innovation. Because of this, Washington State has emerged as a leader in electric boat technology in the United States.

“Seattle is a place where you touch the water,” said Pure Watercraft founder Andy Rebele aboard the company’s pontoon boat in the middle of Lake Union.

Seattle is a place where Rebel sees opportunity. More than a decade ago, Rebel read about electric cars and thought it was useful technology for a boat.

“I haven’t looked around for how to start a business. I was looking around just to buy a boat,” said Rebele. “But nobody built an exciting electric boat.”

What came next was the formation of Rebele’s company, Pure Watercraft, which is headquartered on the shores of Lake Union. The company developed an outboard motor and built an all-electric pontoon boat.

“There are two things that people notice,” Rebele said. “They realize they can’t hear it and can’t see the outboard motor. The engine is underwater where a petrol outboard has this big bulb, this big cowling, up above the waterline. Not ours.”

The company was founded in 2011 and announced a deal with General Motors last winter. The deal is a $150 million investment for a 25 percent stake in Pure Watercraft. Rebel said it’s the largest investment a company has ever made in electric boats.

Pure Watercraft is building a pontoon boat and outboard motor manufacturing facility in Tukwila. The boats are powered by the Pure Watercraft outboard engine and have a battery pack supplied by General Motors.

Rebele said he wants to keep the products made in the United States and plans to continue expanding the Seattle-based company. Discussing the company’s location on Lake Union, he referenced Seattle’s Shoreline Master Program, which promotes water-dependent land use along the city’s coastal areas.

“I think Seattle is certainly in the center of [electric boating], and it should be in the middle of it,” Rebele said. “We have water flowing through the center of our city.”

Records from the Washington State Department of Ecology show that recreational vessels have spilled 14,662.5 gallons of fuel since 2015. However, the department believes many spills go unreported, meaning the number of gallons spilled is likely higher.

“The drops and the cup here and a cup there add up and it never goes away,” said Aaron Barnett, an environmental specialist at Washington Sea Grant.

Washington Sea Grant is a program of the University of Washington’s College of the Environment. The program examines the challenges faced by Washington state’s ocean and coasts. A key task is to educate pleasure boaters about small oil spills. But oil spills are a problem that electric motors eliminate.

According to Rebel, pontoons are currently the most popular boat on the market. Pure Watercraft’s electric motor is designed to have enough charge to enjoy a day on the water. Twin engines allow the pontoon to travel up to 23 miles per hour.

“It should look like the boat is just an asset for everyone,” Rebele said. “It should be quiet. There shouldn’t be any big wakes that disturb people. It shouldn’t be harmful to the environment.”

However, electrification is not for everything. Battery technology is heavy duty and relies on a predictable schedule to ensure there is time to charge the battery.

“A really good electro aptitude is something that puts on a regular, fixed-length run,” Rebele said.

What Rebele is describing is something with a predictable, set schedule, like the Washington State Ferries (WSF) system. It is one of the largest fuel consumers on Washington’s waters and an ideal system for electrification.

“Innovation is a necessity,” said Matt von Ruden, the administrator of the WSF system electrification program. “We have a real opportunity to make a difference here … to set an example for the rest of the country.”

Since 2017, von Ruden and his team have been working to transform the WSF, which uses 19 million gallons of diesel each year.

Many of the changes take place deep inside the ship’s engine, which is so loud you’ll need to wear hearing protection.

“We want to replace two of the four diesel engines with large battery banks,” explains von Ruden. “So we can initially drive them like a hybrid vehicle, where we can run these diesel engines at their highest efficiency. Eventually, a few years later, we will get electricity from shore and charge the batteries that way.”

Secured $1.33 billion in funding launched two projects for WSF. The first project is the construction of new Olympic-class hybrid electric ships. The second project will transform four of the state’s largest ships that ply the route between Seattle, Bainbridge Island and Bremerton into hybrid vessels. The funding also funds the electrification of the central Puget Sound Terminal, which will charge the ships.

“We expect to drive in battery electric mode 95% of the time,” von Ruden said. “So no diesel exhaust, no rumbling engine noise. It will be electric.”

The plans for the ships are currently being approved and reviewed by the US Coast Guard.

Plans from the WSF show the rapid charging system currently under development. Von Ruden described the system as looking like a robotic arm that moves off the dock and plugs into the ferry to charge the battery as passengers board and disembark the ship.

“It’s just the perfect situation, because we have hydroelectric power, renewable electricity, from the mountains,” said von Ruden. “So that’s all that comes together, the maturity of lithium-ion batteries, the availability of renewable power, and then the distance is right where it’s attainable even for our Seattle to Bremerton run.”

WSF believes it will be one of the first and largest US ferry systems to transition to hybrid power. Innovation is propelling boating into the future, a future with less noise, cleaner water and cleaner air.

https://www.king5.com/article/tech/science/environment/washington-puget-sound-electric-boats-ferries/281-b1c45f4d-e6ed-47f9-b58f-18734e853acc How Washington is leading the way for electric boats in the US

Seasons of preserves: How to make berry jelly