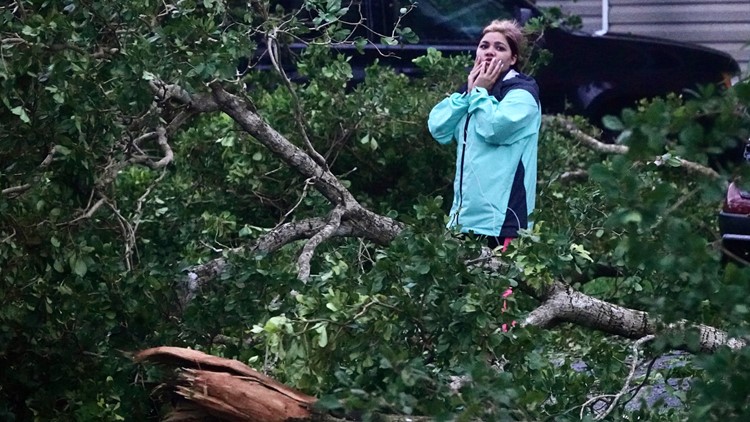 One of the strongest storms to hit the United States swept through parts of Florida’s densely populated Gulf Coast on Wednesday, causing widespread damage.

ST. PETERSBURG, Fla. — Hurricane Ian left a swath of destruction in southwest Florida, trapping people in flooded homes, damaging the roof of a hospital intensive care unit and cutting power to 2 million people before making for the Atlantic Seaboard.

One of the strongest hurricanes to ever hit the United States smashed across the Florida peninsula overnight Wednesday, threatening catastrophic flooding inland, the National Hurricane Center warned.

In Port Charlotte, on Florida’s Gulf Coast, the storm surge inundated a lower-level emergency room at a hospital, though strong winds blew off part of the roof of the intensive care unit, according to a doctor working there.

Water poured into the ICU, forcing staff to evacuate the hospital’s sickest patients – some of whom were on ventilators – to other floors, said Dr. Birgit Bodine of HCA Florida Fawcett Hospital. Employees used towels and plastic buckets to try to clean up the sodden mess.

The medium-sized hospital has four floors, but patients have been forced down only two floors because of the damage. Bodine planned to spend the night there in case any casualties from the storm arrive and need help.

“As long as our patients are doing well and nobody ends up dying or having a bad outcome, that’s important,” Bodine said.

Police officers in nearby Fort Myers received calls from people trapped in flooded homes or concerned relatives. Pleadings were also posted on social media sites, some with videos showing debris-covered water sloshing towards the eaves of homes.

Brittany Hailer, a journalist in Pittsburgh, contacted rescuers about her mother in North Fort Myers, whose home was flooded by five feet of water.

“We don’t know when the water will go down. We don’t know how they will go away, their cars are totaled,” Hailer said. “Your only way out is by boat.”

Hurricane Ian turned streets into rivers and uprooted trees as it slammed into southwest Florida on Wednesday with winds of 150 mph (241 km/h), shoving a storm surge wall. Ian’s strength on landfall was Category 4, the fifth strongest hurricane in terms of wind speed to ever hit the United States

Ian lost strength to Category 1 with winds of 90 mph (144 km/h) late Wednesday as he moved over land. Nevertheless, storm surges of up to 2 meters in height were expected on the opposite side of the state in northeast Florida on Thursday.

The storm was about 55 miles (90 km) southwest of Orlando with maximum sustained winds of 75 mph (120 km/h) as of 2 a.m. Thursday, the Miami-based hurricane center said.

A hurricane warning remained in effect north of Bonita Beach, about 50 km south of Fort Myers, up the Anclote River including Tampa Bay, and from Sebastian Inlet to the Flagler/Volusia county line.

The center posted a hurricane warning between Bonita Beach and Chokoloskee. A tropical storm warning from Chokoloskee to Flamingo on the state’s southwestern tip has also been lifted.

As of late Wednesday, no deaths of Ian had been reported in the United States. But a boat carrying Cuban migrants sank east of Key West in stormy weather on Wednesday.

The US Coast Guard launched a search and rescue mission for 23 people and managed to locate three survivors about two miles (three kilometers) south of the Florida Keys, officials said. Four other Cubans swam to Stock Island, east of Key West, the US Border Protection Agency said. Flight crews continued to search for possibly 20 remaining migrants.

The eye of the hurricane made landfall near Cayo Costa, a barrier island west of densely populated Fort Myers. As it approached, water poured out of Tampa Bay.

“I am enacting this curfew to protect the people and property of Charlotte County,” Prummell said.

The Weather Underground predicted the storm would pass near Daytona Beach and head into the Atlantic before making landfall in South Carolina on Friday.

The governors of South Carolina, North Carolina, Georgia and Virginia have all pre-emptively declared states of emergency. Forecasters predicted Ian will head to those states as a tropical storm, likely bringing more flooding rain into the weekend.

Amazon boosts wages for hourly workers across the US

How Did Marilyn Monroe Die? Cause of Death, Last Words, Funeral Details

‘Dancing with the Stars’: 16 couples perform for season 31 debut on Disney Plus. Who survived and who was eliminated?

Inflation Rate: US economy will likely need drastic action from the Federal Reserve as food and shelter prices soar