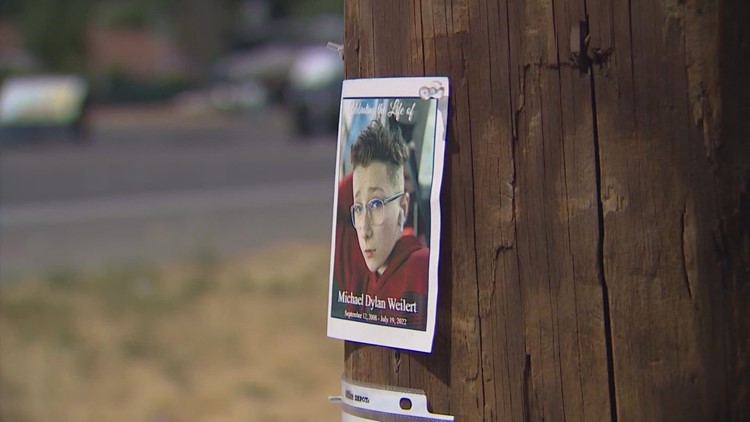 PIERCE COUNTY, Wash. – Amber Weilert’s pain at the loss of her son Michael is still fresh in her mind.

That’s why she’s made it her mission to make Pacific Avenue safer.

“My son Michael Weilert did everything he was supposed to do and pushed the button at the crosswalk on Pacific Avenue,” she said. “And a car wouldn’t budge and hit and killed my son.”

A motorist hit and killed the 13-year-old on July 19 at the crosswalk near the intersection of 134th Street South and Pacific Avenue.

Washington State Patrol investigators say Michael did everything he was supposed to do.

As news of Michael’s death spread, Weilert’s family and community came out to offer what comfort they could.

Pierce County is now asking the state to prevent another parent from feeling Weilert’s pain.

Pierce County Council sent a letter to the state of Washington requesting WSDOT to conduct a safety analysis of the Pacific Avenue corridor to find ways to make areas of high pedestrian and bicycle use safer.

“We are in the process of building our first bus and suburban train line and that will attract many more pedestrians and cyclists and passers-by from across the corridor,” he said.

Young also uses public transportation and has seen how problematic and dangerous the county’s roads are for those who don’t have a car.

“It’s easy to see how diverse the infrastructure is and how difficult it is for people to navigate,” Young said.

Weilert says she overheard others in the neighborhood talking about the dangers of crossing Pacific Avenue.

“This community is full of people with disabilities, seniors, cyclists, everything,” she said. “Each of them could probably tell you that something almost happened to them trying to get across Pacific Avenue.”

“I can hardly think of anything more important,” she said.

Although new to advocacy, Weilert is committed to making Pierce County’s streets safer, just as her son would have wished.

“Michael would do anything to save the next person. I will do the same,” she said.

A Ride of Silence will be held in honor of Michael Weilert and all those who lost their lives to vehicular violence in Pierce County. It’s scheduled to begin this Sunday at 2:30 p.m. at Second Cycle in Tacoma.

What made Nichelle Nichols essential to 'Star Trek' as Uhura