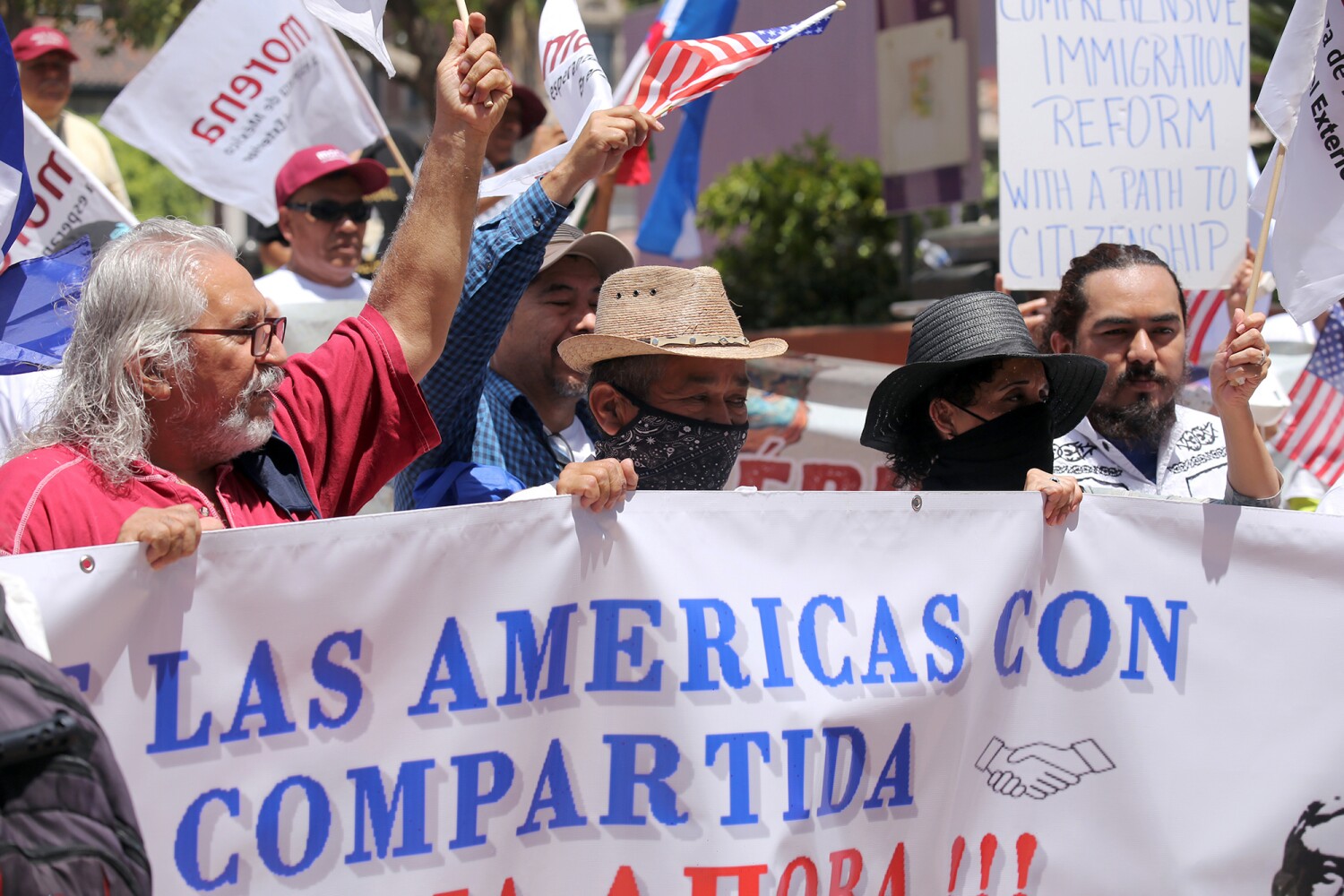 “President AMLO, your people are here!” shouted a group of Mexican immigrants. “We love you, AMLO,” declared one poster.

Indeed, Mexico’s populist President Andrés Manuel López Obrador, commonly known as AMLO, did not and will not set foot in Los Angeles this week. He is boycotting the Americas summit, causing no small nuisance for the Biden administration leading up to the five-day meeting of Latin American leaders that concludes Friday.

But that didn’t stop a number of AMLO supporters, most of them Mexican Americans and Mexican immigrants, from showing up in downtown LA to show their devotion.

“Love for AMLO is international because of its principles and humanism,” said Jorge Magallanes, 46, who carried seven colored tags with different messages expressing his support for López Obrador.

The demonstration, which began at noon in Pershing Square, was organized by AMLO enthusiasts as well as organizations urging President Biden to put immigration reform at the heart of his administration’s agenda.

Biden flew to Los Angeles on Wednesday to officially open the summit, praising democracy across the hemisphere while downplaying tensions arising from the White House’s decision to remove leaders of Cuba, Venezuela and Nicaragua from the exclude event. This diplomatic snub sparked a backlash that led to AMLO and other leaders deciding to boycott the event themselves.

The march, which gradually made its way to the convention center, waved the flags of the United States, Mexico, Honduras, El Salvador, Cuba, Nicaragua and Venezuela, mixed with placards in English and Spanish urging Biden to lower immigration barriers . During his presidential campaign, Biden had promised to introduce an immigration reform package during his first 100 days in the Oval Office, targeting the country’s 12 million undocumented immigrants.

But that promise quickly faltered, largely falling victim to partisan politics and stalling in Congress.

“Our main demand is immigration reform with a path to citizenship,” said Juan José Gutiérrez, President of Vamos Unidos USA. Without such a reform, Gutiérrez stressed, it would be impossible to tackle the so-called root causes of migration in the countries of Central America’s Northern Triangle: Guatemala, Honduras and El Salvador.

But other protesters expressed dismay that AMLO had decided to skip the summit out of sympathy with expelled autocrats like El Salvador’s Nayib Bukele and Nicaragua’s Daniel Ortega.

More than 40 million immigrants from Mexico, El Salvador, Honduras, Guatemala and Nicaragua live in the United States, according to the Pew Research Center. In 2020, even amid a global pandemic, these nations collectively received $65.4 billion in remittances from U.S. relatives. In 2021, the grand total was $83.9 billion.

“I hoped that President Xiomara Castro would not sweat someone else’s fever,” said Cecilia Rodríguez, president of the Honduran Alliance of Los Angeles. “It’s an opportunity she missed.”

In recent years, diplomatic relations between Washington and Central American countries have deteriorated while China has asserted its growing economic clout in the region.

Ricardo Valencia, a professor at Cal State Fullerton, said El Salvador, Guatemala and Honduras have given up lobbying the Biden administration on the issue of immigration reform.

“The three countries have renounced being defenders of their citizens inside the United States. They left them completely alone and trusted what the US Congressmen are doing on this matter,” Valencia said.

But the absence of leaders like Guatemala’s Bukele, Castro, Ortega and Alejandro Giammattei worries organizations campaigning for human rights, freedom of information, transparency and accountability, in part because the authoritarian streaks of these governments have fueled migration.

“Bukele doesn’t like being accountable to the public or the media. He would like to expose himself to the cameras,” said Wilson Sandoval, coordinator of the National Foundation for Development of El Salvador’s Center for Legal Anti-Corruption Advice.

Elizabeth Kennedy, Central America specialist at the Washington Office for Latin America, said: “If you really want to deal with migration, you have to deal with extreme poverty, inequality, violence, lack of social opportunities and services such as education, health, clean water and Electricity.”

One of the summit’s participants, Claudia Ortiz, a Salvadoran federal MP from the opposition party VAMOS, said it was important for Northern Triangle representatives to attend conclaves like the summit – even their heads of state didn’t show up.

“People lose when they have rulers who irresponsibly don’t care about a space where they can influence the decisions that are made at the hemisphere level,” said Ortiz, who attended forums with the former president of Costa Rica’s Laura Chinchilla, and with former Guatemalan Vice President Eduardo Stein.

“On a diplomatic level, it’s considered rude to be invited to a summit and just not have a compelling reason not to attend, and you’re sending someone else who isn’t at the same hierarchical level, who has no decision-making authority,” Ortiz said.

For their part, back on the streets near the convention center, the protesters did their best to get the message across, which was a compelling reason not to attend.

“No more embargo!” they shouted over and over again. “No more blockage!”

What’s the difference between 'pandemic' and 'endemic'?

USPS will be closed June 20 in observance of Juneteenth