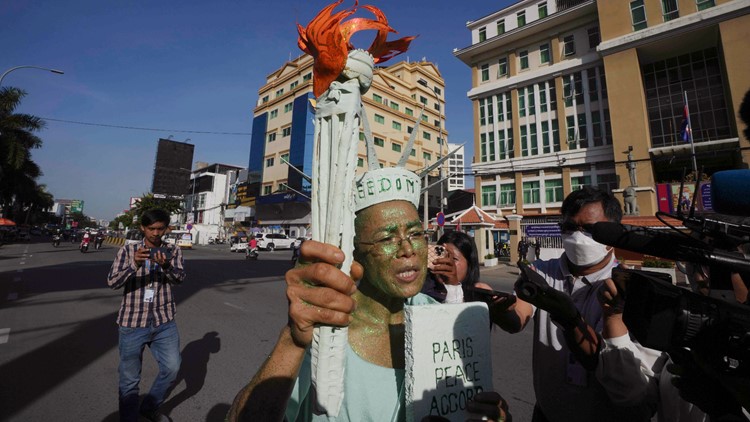 Cambodian courts are widely believed to be under the influence of Hun Sen, whose authoritarian style of rule has kept him in power for 37 years.

PHNOM PENH, Cambodia — A Cambodian-American lawyer and dozens of members of a now-defunct opposition party were convicted of treason on Tuesday in a trial that was the latest step to tame any opposition to Prime Minister Hun Sen’s long-standing rule.

Lawyer Theary Seng and most of the other defendants had been charged over a failed attempt by the leader of the defunct Cambodia National Rescue Party to return from exile in 2019. Cambodian authorities blocked Sam Rainsy’s return, claiming that the 60 accused had a hand in arranging his trip, which Theary Seng and the others have denied.

Cambodian courts are widely believed to be under the influence of Hun Sen, whose authoritarian style of rule has kept him in power for 37 years. The Cambodia National Rescue Party was his party’s main rival before it was dissolved by a court ruling shortly before the national elections in 2018, resulting in a clean victory for Hun Sen’s Cambodia People’s Party.

“The mass trials of members of the political opposition are essentially designed to prevent any electoral challenge to Prime Minister Hun Sen’s rule, but they have also become a symbol of the death of Cambodian democracy,” said Phil Robertson, Deputy Asia director of Human Rights Watch, based in New York, said in an email statement. “By creating a political dynamic based on intimidation and prosecution of government critics, Hun Sen demonstrates his total disregard for democratic rights.”

Phnom Penh City Court found Theary Seng and most others guilty of conspiracy to commit treason, defense attorney Choung Chou Ngy said. Theary Seng was sentenced to six years in prison, the others to five to eight years.

Many of the 60 accused previously fled into exile or went into hiding, and it was not immediately clear how many had appeared in court on Tuesday. According to Human Rights Watch, 27 of the exiled defendants were tried in absentia.

Standing in front of the court when the verdict was announced, Theary Seng said she wanted her arrest to be public and “not in the shadows”. Media saw at least three police officers approach Theary Seng, hold her hand and body, and push her into a waiting police car shortly after the sentencing.

She was dressed as Lady Liberty, in a lime green dress and a crown inscribed “Freedom”, and from time to time she would raise her imitation torch and shout “free the political prisoners”. She has worn themed costumes to her court hearings to publicize her belief that Cambodia is not a democratic nation and the process is unfair.

She told reporters she was ready for a “sham” guilty verdict.

US Ambassador to Cambodia W. Patrick Murphy said on Twitter that Tuesday’s sentencing of Theary Seng and the others was deeply troubling.

“Freedom of expression and assembly, as well as tolerance of dissent, are essential components of democracy,” he wrote. “We call on the Cambodian authorities to release her and other human rights defenders from unjust detention.”

The dissolution of the Cambodia National Rescue Party, its removal from the ballot and a government crackdown on media and pro-independence voices paved the way for Hun Sen’s party to win the 2018 election and claim every seat in the National Assembly. He has repeatedly stated his intention to remain in office until 2028 and has confirmed one of his sons as his successor.

Sam Rainsy, Hun Sen’s main political nemesis, has been in exile since 2016 to avoid serving prison sentences on defamation and other charges he believes are politically motivated.

The trial of Theary Seng and her co-defendants began in 2020 but was stayed until December 2021 due to coronavirus restrictions. Initially, almost 130 defendants were named and the process was divided into three processes for reasons of manageability.

In a similar case, in March the court convicted 21 people of treason and related charges for their non-violent political opposition to the Cambodian government. Seven exiled leaders of the Cambodia National Rescue Party, including Sam Rainsy, were sentenced in absentia to 10 years in prison. Another 13 accused were simple party supporters, who were sentenced to more than three years in prison by the court.

https://www.fox43.com/article/news/nation-world/cambodian-treason-charges/507-43ae99aa-bbfd-494e-92b1-04959fbc481d In Cambodia, American lawyer among dozens convicted of treason

Putin alert for signs of eroding Western unity on Ukraine

The Gensler Bid to Control Trading