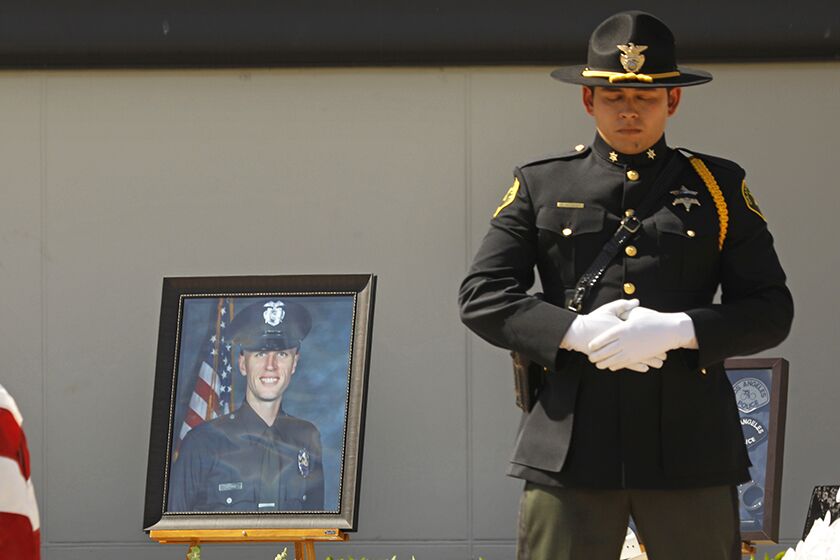 A report on the department’s investigation into Tipping’s death was filed with the Los Angeles Police Commission Tuesday — the first detailed public record the LAPD has provided of the May 26 incident.

The department’s investigation found that Tipping and the other officers involved in the training were following standards set by a state agency, Lizabeth Rhodes, director of the LAPD’s Office of Constitutional Policing and Policy, told the Civilian Police Commission on Tuesday. No evidence was found to support a claim by Tipping’s mother that other officers simulated a mob and hit Tipping during practice, Rhodes said.

At a virtual commission meeting on Tuesday, Rhodes called Tipping’s death a “tragic accident” that could not have been prevented.

“This investigation revealed nothing that, if conducted prior to the accident, would have definitively prevented Officer Tipping’s death,” read one of the slides from Rhodes’ presentation to the commission.

Still, Rhodes added, the department’s report made five recommendations “to improve future training,” ranging from providing safety briefings at the start of each class to revising protocols for all control and arrest training to “meet the expectations of to be articulated clearly to educators and students”.

The results are consistent with a previously completed autopsy which found Tipping suffered a fatal spinal cord injury during the fall and also ruled his death was an accident.

“In my view, nothing we found could have prevented this from being an unusual event,” LAPD chief Michel Moore said at a media briefing later Tuesday. “However, we are taking some extra safeguards to build up a larger buffer, if you will.”

The incident happened on the LAPD Academy campus in Elysian Park on the penultimate day of a five-day training course for officers assigned to bike units.

According to the report, Tipping attended the training in 2021 and had been invited back this year to serve as an “additional trainer.”

According to the Peace Officers Standards and Training Commission, the state agency that oversees training standards, only officers who have completed the required instructor training course should conduct courses involving defensive tactics and arrest and control techniques, or ARCON techniques. Tipping wasn’t certified as an instructor, but an aide advising investigators said an officer could serve in a “role-playing” capacity like Tipping, so long as he wasn’t teaching others about tactics for self-defense or arresting and controlling people, so the report.

Tipp was the designated attacker in a scenario designed to teach bike officials how to diffuse an encounter with someone who has become combative, the report said. In the exercise, officers learn to defend themselves with punches and kicks and to use the bicycle to put distance between themselves and the suspect.

Donning protective gear consisting of a ballistic vest, pads for his legs, boxing gloves and a surgical mask while the trainee wore a ballistic vest and empty utility belt with a mock firearm and foam baton, the report said. Tipp did not appear to be wearing a hat.

Rhodes said the group of officers had gone through at least 10 similar drills when Tipping stepped in to play the “suspect” role.

At one point during the encounter, Tipping “rushed” at the officer, who was not identified in the report, and attempted to pick him up. In response, the officer instinctively wrapped his arm around Tipping’s neck, the report said. The two men fell to the ground and officers at the scene immediately realized something was wrong with Tipping and began CPR, according to Rhodes.

Rhodes said she didn’t know why Tipping tried to grab the other officer, saying the training specifically says “there shouldn’t be any detention or anything.” Several officials recalled being told before the exercise that instructors were not allowed to put trainees on the ground, the report said.

Tipping was taken by ambulance to a local hospital, where he died three days later.

Until the report was released, the department said little about the incident. The lack of transparency fueled rampant speculation online that officials were trying to keep the facts of the death a secret. Tipping’s mother’s allegations added to speculation of wrongdoing.

Alluding to that “firestorm,” Commissioner Steve Soboroff asked Rhodes Tuesday if there was any evidence to support the mother’s claim that Tipping was assaulted by multiple officers at the scene.

“We didn’t see any evidence out there,” Rhodes replied.

Ministry officials said there was no video of the encounter.

Attorney Bradley Gage, who has filed a wrongful death lawsuit on behalf of Tipping’s mother, has publicly questioned the account of the incident offered by authorities. Gage has argued that a laceration to Tipping’s head and other injuries noted during the autopsy could not have happened when and how authorities said they did.

“How come you fall to the ground with a broken neck, a head laceration, a head hematoma, three broken ribs and a perforated liver?” Gage said in response to the report. “First, this is different than what they said before; before saying it was a grappling exercise and they had no discussion about a bike.

On Monday, Gage made a new allegation during a news conference that suggested officials present at the training were upset that he had tipped his role in an internal investigation.

Moore dismissed this claim as “unfounded”.

“I have no idea where this lawyer is coming from with these allegations.”

Who Will Become a Nazgûl?

PennDOT preparing for wintery mix in parts of the Lehigh Valley