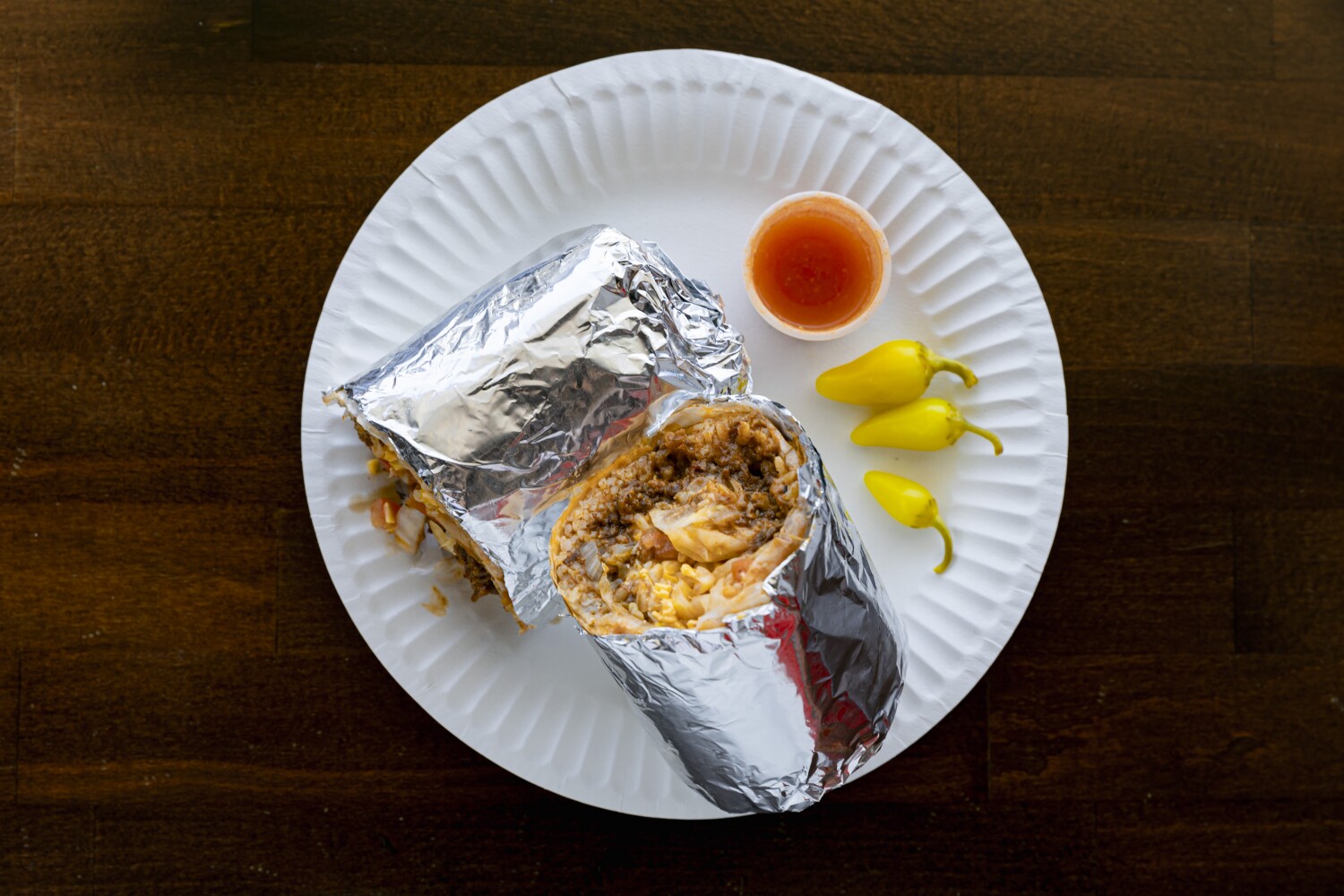 If we’re friends, I was probably trying to get you interested in the combo burrito at Olympic Burger in Koreatown.

Not only is it roughly the height and weight of a healthy newborn, but the burrito contains a surprisingly dense web of cultural references unique to Los Angeles.

Take the inclusion of pastrami — thinly sliced ​​and used almost like a condiment in burgers and fries, a style that has its roots in historical interactions between Jewish and Mexican populations in Boyle Heights.

Then there’s chili, not thick with lots of beans, but the runny kind you often find at single-name roadside burger and burrito stands throughout Southern California, like Jim’s, Tom’s, and Tam’s. Here it is also served with cheese over rice.

And the meat, referred to on the menu as “Costilla Galbi,” is a fusion of Korean short rib marinade and flavors from the Mexican short rib preparation, costilla de puerco.

Olympic Burger and Los Angeles in general are replete with these organic interactions across cultural and language barriers. Down the street at Sopita Ramen features kimchi tofu ramen on a menu curated by a South American Korean chef. A few months ago I wrote about Ocha Classic, a nearby Thai restaurant chain popular with Latinos.

On a recent weekday I met Sahira Santana, 40, who was visiting her family’s home in Los Angeles from Australia, where she had moved with her husband a few years ago.

Olympic Burger was one of her first stops on her journey home. She used to work upstairs in an insurance agency and became a regular customer. Eventually she converted her parents, immigrants from El Salvador, who fell in love with the Costilla Galbi.

Now, some of their cousins ​​and relatives have married or formed close relationships with Asian Americans. Her mother, Roxana, 59, often goes to Korean bakeries.

“That’s how we grew up. We are mixed, very open. We know to respect cultures,” said Sahira. “And I think Asians are very similar to Hispanics.”

I think those quiet interactions are the building blocks of community in Los Angeles. There is an easy camaraderie and automatic understanding that forms among those who are in the same place or going there, no matter how long. In other words, there is fellowship around crossroads.

To highlight these stories, I’m testing a new occasional feature in this column called “Intersections.” In each piece I focus on a specific crossroads and tell a story about the people there.

I have a few physical intersections in mind and welcome suggestions for interesting ones to visit – I’ll go anywhere within the Los Angeles County boundaries. But I’m equally interested in intersections of age, culture and background.

Future columns might visit a South LA intersection with six drive-thru restaurants, a quinceañera at an Armenian wedding hall in the San Fernando Valley, a Mexican musician busking with a Chinese violinist at a San Gabriel mall. Maybe I’ll tell the night I was so entranced by a Japanese nightclub singer in an Ethiopian restaurant singing Frank Sinatra that I dropped injera bread in my lap.

If you’re reading this column, you’ll probably find that I write a lot on this subject. I think that’s because I’m always looking for reasons for hope. I hope this city doesn’t price the people who run them, whose lives they make beautiful. I hope that this chaotic, multiracial democracy does not tear itself apart, or at least that in the aftermath it can come together and remain a place where people like my family can call home. If any city gives me hope, it’s Los Angeles.

When I started this column, I wrote that we live our lives in parallel. I spoke of how my mother and I experienced completely different cities that only seemed to overlap at home, at the dinner table for an hour.

I think that’s still true. But what I’ve also accepted is that we’re bound to overlap. You can’t stop people from finding each other and forming a community.

Olympic Burger is a product of it. Korean immigrant Elvis Kim, the owner, came to the United States in the 1980s and was inspired by the casual dining then popular in Southern California. (John Y., whose family currently owns the eatery, affirmed that his chosen English name was really Elvis. They sometimes play his songs at the restaurant.)

There are no Japanese involved in the restaurant, but teriyaki was such a cross-cultural crowd pleaser at the time that Kim offered it.

Ultimately, there’s no story behind its flavor fusions—just the whimsical and adventurous tastes of a Korean immigrant and a community diverse enough to share.

I still sometimes hear people describe Los Angeles or California or America as a melting pot and I’ve never agreed with that term.

There’s a lot of heat, from climate change, drought, buildings burning to protest police killings, and record-breaking summer temperatures. But we don’t melt into a single alloy – we create new ones.

America is more like Olympic Burger’s combo burrito, different elements sharing the same space. One bite is Mexican, another Jewish, the next Korean, and all are pure Los Angeles.

Ohio State doesn’t own ‘the’

Traumatic brain injury survivor gets help from ‘Homers for Hope’