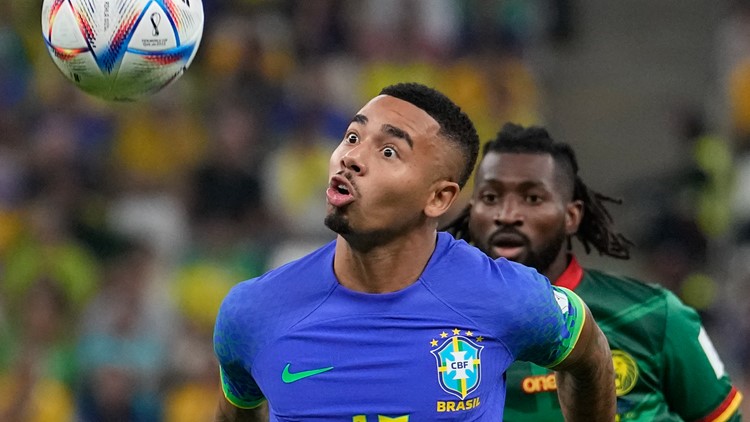 LUSAIL, Qatar – Vincent Aboubakar struck two minutes after stoppage time as Cameroon gave Brazil their first group stage defeat at the World Cup in 24 years on Friday – a result that nonetheless allowed the five-time champions to win the group and the Africans to eliminate.

Aboubakar was sent off with a second yellow card for removing his shirt during his celebration after sending his powerful header past Brazil goalkeeper Ederson. The Cameroonian captain then threw his jersey on the ground near the corner flag and waited for his teammates to rush towards him.

Cameroon had not won any of their last nine World Cup games, losing eight and drawing one – against Ireland in the tournament’s opening match in 2002.

Brazil, playing to their reserves, had won 17 consecutive group games since losing 2-1 to Norway in France 1998. They had lost just one of their last 29 group games at the tournament.

It was the eleventh straight year that Brazil won their World Cup group. It ended with six points, as did Switzerland. But the South Americans had the better goal difference. The Swiss have also progressed and meet Portugal. Cameroon finished with four points and Serbia had one.

Coach Tite rested most of his regular players and made ten substitutions since Monday’s win against Switzerland.

Brazil were still without the injured Neymar but the star striker was at the Lusail Stadium to watch the game with his team-mates.

Both sides created some good chances but were unable to convert until Boubakar’s winner scored from a cross from Jerome Ngom Mbekeli’s right flank, which came on in the 86th game.

Antony, Pedro and Gabriel Martinelli had some of the best chances for Brazil, while Aboubakar was already close for Cameroon.

Brazil eventually conceded a shot on goal after failing to do so in their first two games.

Cameroon, who opened with a 1-0 defeat by Switzerland, endured a bit of a crisis after beating Serbia 3-3 when goalkeeper Andre Onana was sent home for disciplinary reasons after a dispute with coach Rigobert Song.

Cameroon did not qualify for the last World Cup in Russia four years ago.

With his start on Friday, 39-year-old Dani Alves became the oldest Brazilian ever to play in a World Cup, ahead of 38-year-old centre-back Thiago Silva, Brazil captain in Qatar. Alves’ last World Cup game came in the round of 16 of the 2014 tournament in Brazil. The right-back was injured before the 2018 World Cup in Russia.

Neymar joined his team-mates at the stadium for the first time since injuring his right ankle in Brazil’s opener against Switzerland.

He didn’t limp when he got off the team bus and even played with the ball while his teammates warmed up. The crowd cheered loudly as he sang the national anthem on the stadium’s big screen before the game. He later sat in the stands behind the bench while fans tried to get closer and take pictures of him.

Brazilian fans showed their support for soccer star Pele, who is hospitalized with a respiratory infection in Sao Paulo.

They displayed a banner behind one of the gates with an image of Pele holding a soccer ball and opened a large flag with an image of the great Brazilian and the words: “Pelé. Get well soon.” A fan in the stands held up a shirt with a photo of Pele on it.