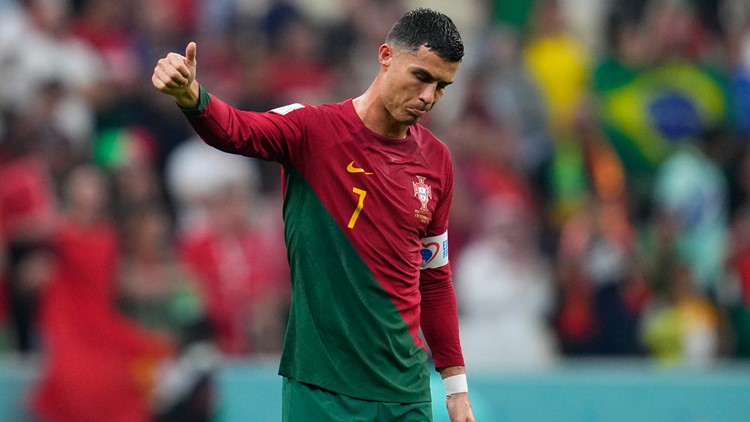 The 37-year-old star is playing in his fifth and likely last World Cup.

DOHA, Qatar — Cristiano Ronaldo has been dropped from Portugal’s starting line-up for the second straight game at the World Cup.

Ronaldo, 37, will not start Saturday’s quarter-final game against Morocco after sitting on the bench and coming on as a substitute against Switzerland in the Round of 16.

Gonçalo Ramos, who scored a hat-trick on his first start for Portugal in Portugal’s 6-1 win over Switzerland on Tuesday, was again selected ahead of Ronaldo.

Ronaldo is playing in his fifth and probably last World Cup.

He was left out of the line-up against the Swiss after coach Fernando Santos expressed frustration with his team captain’s attitude in the previous game.

Santos later said Ronaldo was “not happy” when told he was benched, but never threatened to leave the World Cup over the decision.

Ronaldo had lackluster performances in the group stage, although he did score in the 3-2 win over Ghana to become the first player to score in five World Cups. Since 2006 he has participated in every edition of the tournament.

Portugal are attempting to finish in the last four for the third time, having finished third in 1966 and fourth in 2006. Since that tournament in Germany 16 years ago, it has not progressed beyond the round of 16.

https://www.king5.com/article/sports/soccer/world-cup/ronaldo-benched-against-morocco-world-cup/507-580c9f9d-b47b-44ec-a97f-ccdac79163f1 Is Cristiano Ronaldo starting for Portugal? Why he’s benched