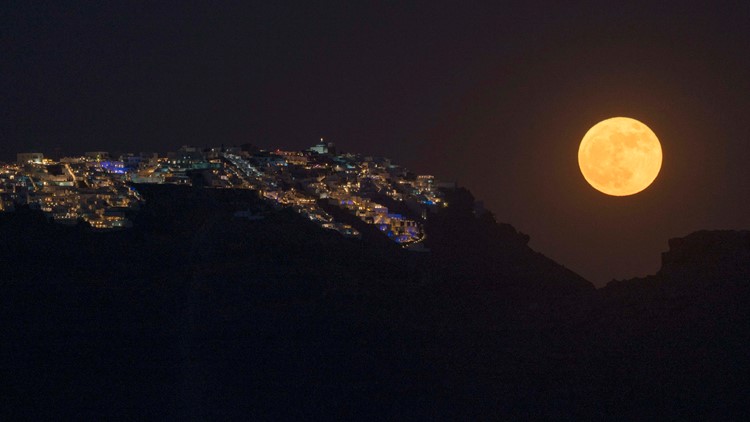 Here’s what you should know about the cosmic combination that creates a handful of super moons each year.

NEW YORK — If you missed last month’s Super Moon, this week gives you another chance.

The full moon of this month is Wednesday. At the same time, the moon’s orbit will bring it closer to Earth than usual. This cosmic combination is called the supermoon.

That can make the moon appear slightly larger and brighter depending on the weather — although the difference isn’t noticeable to the naked eye. Because of the perspective, it looks largest and fullest when it’s close to the horizon.

MORE: Why does the moon look close some nights and far away other nights?

A name for Wednesday’s full moon is “Buck Moon” – a reference to the season when new antlers grow on male stags or bucks.

The Super Moon on June 14th was the “Strawberry Moon” because it is the full moon at strawberry harvest time.

What is a super moon?

The moon’s orbit around the earth is an ellipse, not a perfect circle. A full moon is considered a supermoon when it is 90% near perigee, its closest point to the earth. Perigee is about 226,000 miles from Earth — about 25,000 miles closer than the moon’s most distant point.

According to NASA, the nearest supermoons appear “about 17 percent larger and 30 percent brighter” than the most distant and faintest moon of the year. That 17% isn’t actually enough to make the moon look noticeably larger, but supermoons are still slightly brighter than other full moons, according to NASA. They can also cause higher than usual tides due to their close proximity to the earth.

There are only three or four supermoons each year, always in a row.

Column: Jill Biden and GOP are two sides of a breakfast taco

Reactions from the Roe v. Wade decision across Pennsylvania

Is the Most Important Battle of the War Coming?