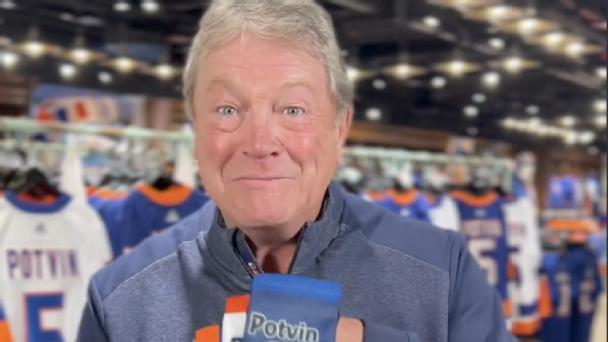 It begins with a fan whistling from the stands, repeating the same five notes three times. Then three staccato whistle. Then the refrain:

The tune has existed for decades, whether the Rangers play the Islanders or anyone else. But now Potvin is finally turning the tables with the raunchy vocals he inspired – and doing it for a good cause.

Beginning Wednesday night, fans at UBS Arena, home of the Islanders, will be able to purchase Potvin Socks from the official team store. The islanders are hosting the Rangers tonight, and Potvin had a video message for the Blueshirts fans who had arrived: “You’ve been singing it for 43 years. Now you can wear it!”

The chants were heard.

Get your exclusive Potvin socks or hats at #islands Lab tomorrow night and meet Denis Potvin before the game. 10% of proceeds from the socks go to the Islanders Children’s Foundation.

The Potvin socks are $19 for three pairs. The team said 10% of all proceeds from sales will go to the Islanders Children’s Foundation, which funds programs that help local children with a focus on health, education and youth hockey development.

RSV cases rise in children, cause high number of hospitalizations

A Progressive Reversal on Ukraine Letter

Perspectives from around college sports on NIL’s one-year anniversary

“Always supported him as a superior talent”

USA draw with England and now must beat Iran