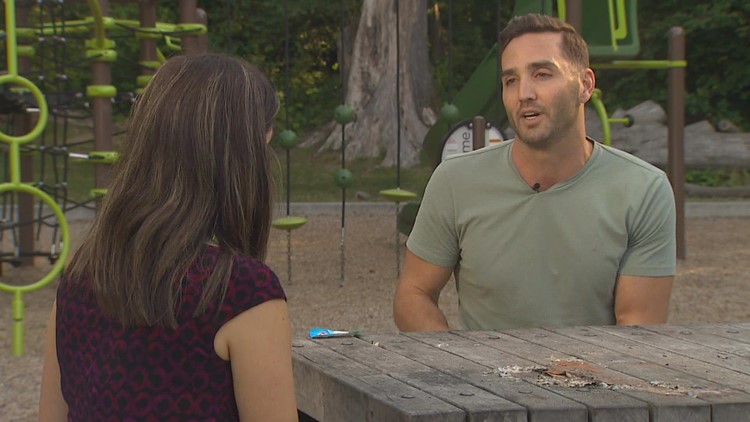 Ryan said he experienced “strange” symptoms five days after returning from a trip. He described his struggle to get the right diagnosis from healthcare providers.

SEATTLE — The first person to be diagnosed with monkeypox in Washington state sat down for an exclusive interview with KING 5.

The World Health Organization recently declared monkeypox a global health emergency. The US is currently reporting nearly 5,000 cases of the disease.

Monkeypox is an infection spread primarily through close contact with other infected people. The infection can cause a rash that appears like pimples or blisters on the face, mouth, or other parts of the body, according to the Centers for Disease Control (CDC).

Ryan, who asked for his last name to be withheld, said he had “strange” symptoms five days after returning from a trip to the UK.

“Something on my skin,” he said.

Ryan went to his dermatologist and GP but he said they were dismissive.

“I thought, how can I find a doctor who tries harder?” said Ryan.

Ryan found a community clinic that ran several tests, all of which came back negative, so he started doing his own research and went back to the doctor.

“We agreed that we should talk to the CDC, and then we did, and it just went from there,” Ryan said. He was then immediately tested for monkeypox and had a positive result 36 hours later.

“It was super scary, and I think the stress and anxiety that came with it probably made the symptoms worse,” Ryan said.

At this point, Ryan was the first confirmed case of monkeypox in Washington state. He said Public Health – Seattle and King County is extremely helpful.

“Since then, so much more information has come to light and we know a lot more about the rate at which it’s spreading, and yet the response doesn’t seem to have changed much,” Ryan said.

Doctor Matthew Golden, director of the Seattle and King County HIV/STD program, said the number of monkeypox cases is doubling every week and the current vaccine supply cannot keep up.

“We think that ideally we would have at least 80,000 doses of the vaccine, what we currently have is only 6% of that,” Golden said.

King County received its final shipment of 3,300 vaccine doses on Wednesday and is vaccinating people at Harborview Medical Center. They plan to continue vaccinating a third in Harborview, while a third will be sent to providers across the county and the final third will be administered through community vaccination events, which they hope will take place in 10 days.

Ryan recently asked to be vaccinated and King County has told him he is not considered eligible as he has recently recovered.

“We have tools that can prevent the spread and we’re not using them to the fullest, it’s hard for me to see,” Ryan said.

His friends went to Canada to get vaccinated.

“I’ve also been thinking about going to Canada or somewhere else to get it,” Ryan said.

https://www.king5.com/article/news/health/monkeypox/monkeypox-first-person-diagnosed-washington/281-0b98d132-8089-4ce6-840a-ecbdf1e2de35 ‘It was super scary’: First Washington resident diagnosed with monkeypox talks about his experience

NBC ‘Days of Our Lives’ Spoilers : EJ senses an opportunity, Chanel makes her choice, and Paulina the Love Doctor is in