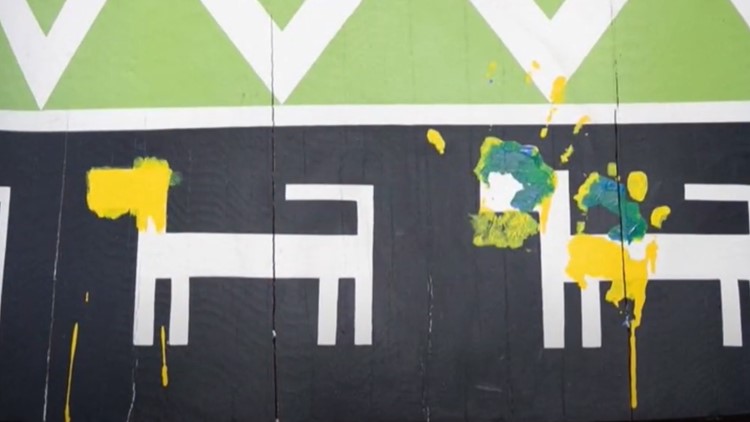 Someone painted the “Welcoming Woman” carving on campus and caused an estimated $5,000 in damage.

OLYMPIA, Wash – Someone, or several, vandalized several pieces of Indigenous art on the campus of The Evergreen State College last year.

The most recent incident occurred on the “Welcome Woman” carving, which has greeted students at the main entrance of the school since 1985.

Earlier this month, someone painted some images on a painted woodblock.

She estimated the damage and repair costs would be up to $5,000.

The paint problem is just the latest one.

Over the past year, vandals have spilled paint and scratched another woodblock, Briggs said, a rock was thrown through an engraving window at the Indigenous Art Campus, and a pile of what appeared to be Human hair was left at the feet of another “Welcome woman” carved.

“I use disdain as I use it because these arts are filled with visions and symbols, as well as styles, of our tribal ancestors from this region,” says Briggs.

Briggs said campus security is monitoring the directions, but no arrests have been made for the vandalism.

The vandals’ paint on the “Welcoming Woman” has been repainted, but Briggs said the statue will need to be sanded and repainted when conditions are dry enough, possibly next spring.

She said the vandalism evoked traumatic memories for indigenous people.

Can a new morning show with Don Lemon help turn around CNN?