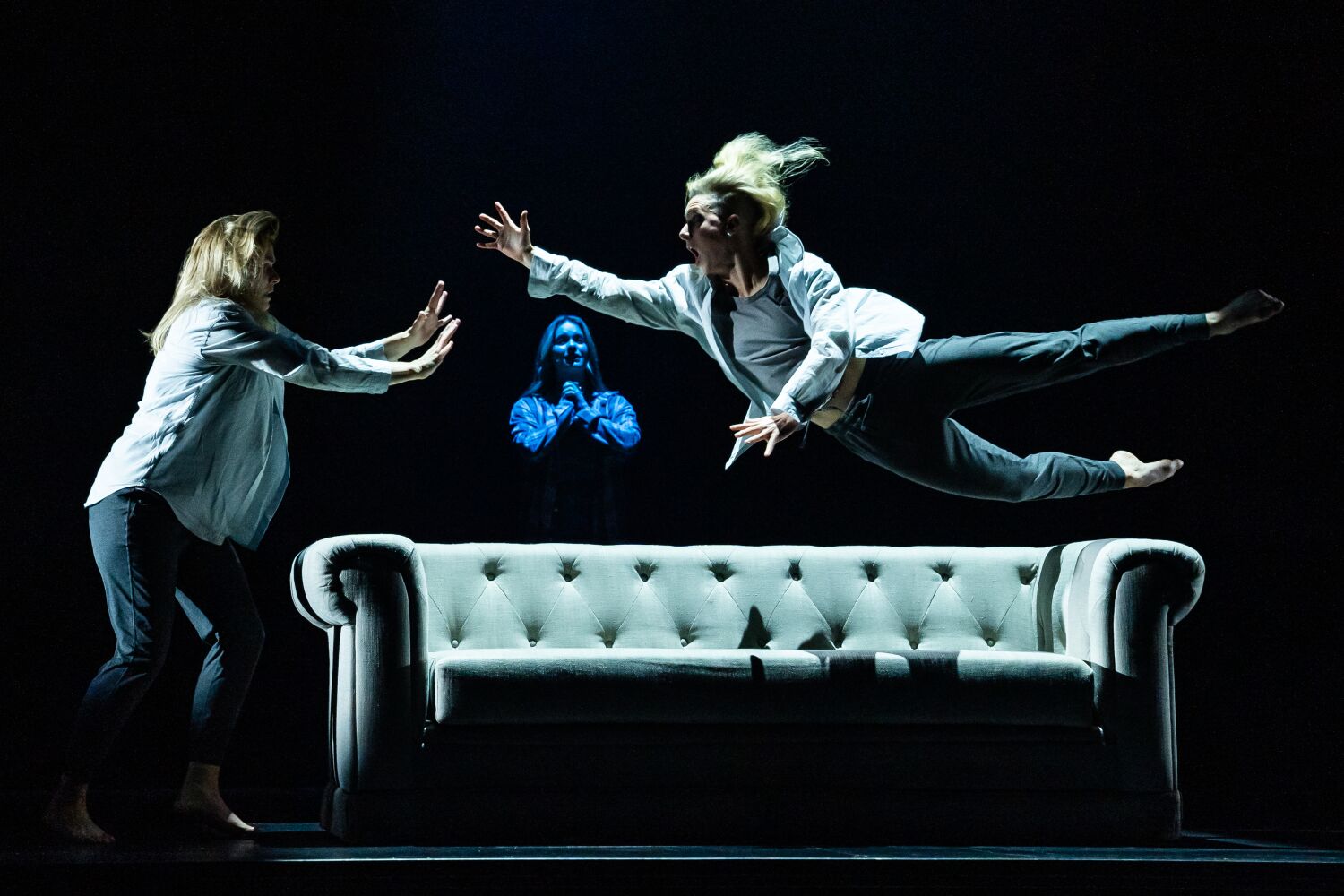 As a singer and songwriter, Alanis Morissette has one of the most distinctive voices in rock ‘n’ roll. Her raw, quirky, intelligent lyrics, idiosyncratic diction and expressive range mean that nobody in the universe sings quite like her. But if you subscribe to the many-worlds interpretation of quantum mechanics, there’s another universe somewhere where everyone — teen, adult, male, female, or non-binary — sings just like Alanis Morissette.

Jagged Little Pill, the Tony-winning musical inspired by Morissette’s art and premiering at the Hollywood Pantages on Wednesday, invites Angelenos to visit this universe. Fans find themselves in a fictional Connecticut town populated by characters whose emotional lexicon consists of 22 selections from Morissette’s catalogue: the 13 songs from her 10x platinum-selling 1995 album Jagged Little Pill, supplemented by some later hits, a handful of deep cuts and three bespoke additions. In their performances, these characters are faithful to Morissette’s beloved vocal quirks. They hum, croak, whisper, whine, buckle and scream; they do this yodeling slurping thing. They give the “BAY-bay” at the end of their phrases a brute swing.

Morissette doesn’t sing her own stuff in this world, even as a character, because “Jagged Little Pill” isn’t a bio-musical — that opportunistic offspring of the jukebox musical (e.g., “The Donna Summer Musical”) that has has become a reliable Broadway winning machine in recent years. Morissette is a notorious writer who is said to have pulled the lyrics for her groundbreaking album straight from her diary. I think their bio-musical would have been really good.

But Morissette and her collaborators — longtime writing partner Glen Ballard, book author Diablo Cody, and director Diane Paulus — want something different in Jagged Little Pill. They have come to hold up a mirror to mainly white suburban America and to reveal – in case we missed all the memos – that our most cherished values ​​are based on lies, delusion and denial. They allow their fictional characters to suffer trauma and dramatize the resulting anguish through seriously staged set pieces that occasionally seem exaggerated. (We can understand that rape is traumatic even without watching a slow-motion re-enactment.)

As the tragedy piled up midway through the show, I felt a little intimidated by the cast. Every few minutes, it seemed, they would form a phalanx across the stage to yell at me, channeling the fear of teenagers everywhere into a wordless bark. (There were words, of course, but I couldn’t always hear or understand them. The audio seemed muddy on opening night; it might improve as the run progresses.) The choreography of Sidi Larbi Cherkaoui, a sort of controlled threshing, is athletic and challenging and also a tad condescending, as if audiences don’t remember that teenagers sometimes suffer from bulimia — one of the few issues not addressed in the storyline — unless a dancer shows up to play a spree and clean up.

Thankfully, the show doesn’t leave its characters (or the audience) in the extreme, but returns with a hopeful moral: facing reality hurts badly, but it’s the only path to forgiveness. Or as Alanis puts it more succinctly: “You live, you learn.”

Clearly the right choice for the job, author Cody (“Juno”) keeps things from getting too dark with her deft dialogue and characterization. The family she created, the Healys, are troubled in a familiar way, but still endearing and funny. We first meet her at her annual Christmas card photoshoot, where mother Mary Jane (the compelling, hilarious Heidi Blickenstaff) composes her annual Christmas letter — obsessively interspersing the smug tone common to those letters with bitter marginal notes.

After lovingly ranting about the long hours her husband Steve (Chris Hoch) worked to keep him away from the family, MJ cheerfully adds, “I can tell you what Steve was looking at: hardcore pornography.” (She follows his internet searches.) Their son, Nick (Dillon Klena), has just been admitted to Harvard. “Our dream school – I mean his dream school,” says MJ. She doesn’t realize that Nick is cracking down under the pressure of being perfect; Eventually he breaks down and gets drunk at a party, with terrible consequences.

The parents’ focus on Nick also keeps their daughter Frankie (Lauren Chanel) at a distance. She is adopted, black, tentatively bisexual, and a passionate feminist and social activist. Her best friend with benefits, Jo, is played here by Jade McLeod, a non-binary actress who was cast after a cisgender actor in the Broadway production sparked protests. Though Jo has a rough life at home, they’re the kind of old soul who can be counted on to cheer up a grumpy friend with the jaunty “hand in my pocket.”

But when Frankie forgets all about Jo in her infatuation with a charming new boy (Rishi Golani), Jo doesn’t take it: Her searing rendition of “You Oughta Know” got the audience on their feet before the second chorus.

Two other scenes particularly appealed to me. In one, Frankie reads a new poem to her high school writing workshop: It’s actually Morissette’s “Ironic.” Her classmates keep interrupting her to explain why the situations she is describing – the black fly in the Chardonnay etc. – are actually not ironic. “It’s not ironic,” emphasizes one. “It’s just, like, s-” This tongue-in-cheek exchange made Morrissette even more like me, transporting me to the mid-1990s when my writer’s workshop friends and I were genuinely on the same page.

The second scene belongs to MJ: while singing “Smiling,” a haunting ballad Morrissette wrote with Michael Farrell for this musical, MJ goes through her daily chores in a painkiller haze, but in reverse, the scenes of her morning reshaping and dissolving around her around as she shuffles backwards on her well-worn route. The graceful, meticulous staging is a triumph.

“Jagged Little Pill” didn’t give me as much gossip behind the music about Morrissette’s life as I would have liked. (Will she ever tell us if “You Oughta Know” is really about Dave Coulier?) But it still sings in her voice, enlivened by her talent, courage, and ultimately optimistic worldview.

Duration: 2 hours, 40 minutes, with one break

‘Freedom on Fire’ review: Ukraine and the courage to take action