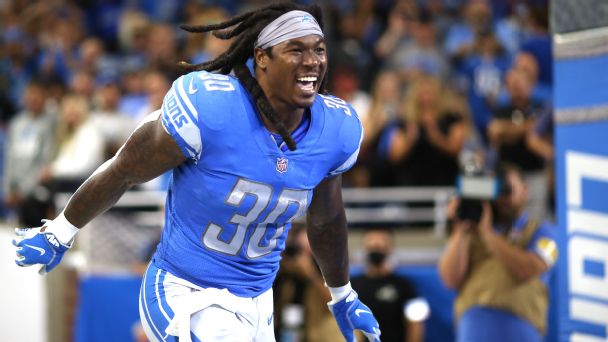 Jamaal Williams is on fire, the Razorbacks seek respect and more from our quotes of the week.

“I left my crystal ball in my other pants.”

— Carolina Panthers offensive coordinator Ben McAdoo on whether there will be tension in the locker room between Baker Mayfield and Sam Darnold. Both quarterbacks compete for the team’s starting spot.

– Detroit Lions running back Jamaal Williams speaking to his team at training camp about “hard knocks.” The Tigers were 3-13-1 in 2021.

“Don’t think these tears are from a weak mind, I’ll run over you crying”

“Have you ever seen a Lamborghini commercial? I don’t have to advertise.’

— Cleveland Browns running back Nick Chubb, responding to a question from former teammate Hunter Long about why he never tweets or uses Instagram

“For the past few years, Arkansas has always been slept in, and we’re still dirt under a rug. … This program is on the rise, and we will continue to build and get back to the top where Arkansas belongs.

https://www.espn.com/nfl/story/_/id/34384607/jamaal-williams-run-opponents-crying-plus-more-quotes-week Jamaal Williams will run over opponents while crying, plus more quotes of the week

From Caroline Garcia to Frances Tiafoe, it’s a 20-somethings resurgence at the US Open