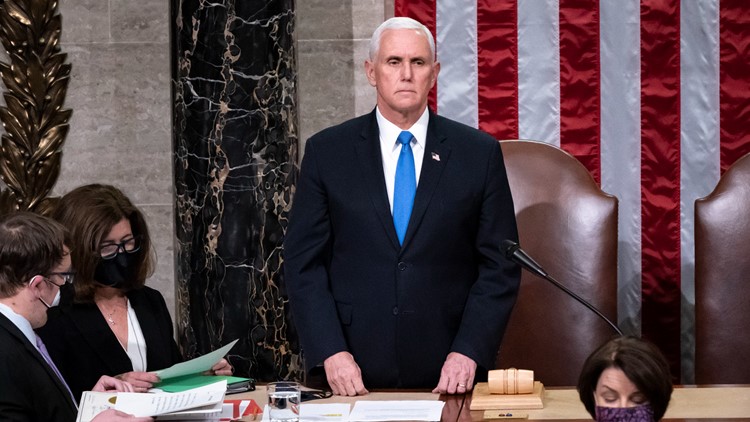 The pressure Trump put on Pence, including at a Jan. 6 rally, led directly to the Capitol riot, the panel said.

Poignant new evidence also showed how the mob that stormed the Capitol that day came within 40 feet of where Pence and his team were taking shelter, highlighting the danger Trump had put him in.

Using live testimony, including from Pence’s attorney, and other evidence from its years of investigation, the panel dissects conservative attorney John Eastman’s plan to reverse Joe Biden’s election victory as unlawful and unconstitutional. The pressure Trump put on Pence, including at a Jan. 6 rally, led directly to the Capitol riot, the panel said.

“Are you out of your mind?” Eric Herschmann, an attorney who advises Trump, told Eastman in recorded testimony shown at the hearing.

“You’re going to turn around and tell more than 78 million people in this country that your theory is that you’re going to invalidate their votes in this way?” Hermann said. He warned, “You will cause riots in the streets.”

A text message from Fox News’ Sean Hannity to Trump’s chief of staff Mark Meadows about the plan ahead of Jan. 6 read: “I’m very worried about the next 48 hours.”

The panel opened its third hearing this month, showing Trump’s false claims of a fraudulent election prompted him to seek alternatives as courts dismissed dozens of lawsuits against the vote.

Trump aligned himself with Eastman’s highly unusual plan to defy the historic precedent of the Electoral Count Act and began pressuring Pence publicly and privately as the vice president was set to chair the Jan. 6 joint session of Congress to contest Biden’s election to confirm.

The committee said the plan was illegal, and a federal judge said it was “highly likely” that Trump committed crimes in his attempt to stop certification

Panel chair Bennie Thompson, D-Miss., opened the recent hearing, quoting Pence’s own words that there is “almost no idea more un-American” than the one he is asked to carry out – reject the vote.

The committee portrayed the gripping, if complicated, final days before the deadly Jan. 6 riot, when defeated Trump theorized that Pence could influence the election and put his own vice president in jeopardy as the mob headed for the Capitol.

The panel heard from Greg Jacob, the vice president’s attorney, who fought off Eastman’s ideas that Pence should carry out the plan, and retired federal judge Michael Luttig, who called Eastman’s plan, his former legal secretary, “faulty at every turn.” .

Jacob said Pence called him to his West Wing office in early December 2020 to provide clarity on the vice president’s role in certifying election results. He said it had become clear to Pence that the Founding Fathers had no intention of empowering any individual, including a candidate running for office, to influence the outcome of the election.

Luttig, a highly respected conservative scholar who had been a leading contender for the Supreme Court more than a decade ago, said that if Pence had followed Trump’s orders in a patently unlawful manner, he would have “declared Donald Trump to be the next president and plunged America into something of what… which I believe would have amounted to a revolution within a constitutional crisis in America.”

Thursday’s session also presented new evidence of the danger Pence faced when rioters outside the Capitol chanted “Hang Mike Pence” with a makeshift gallows as the vice president went into hiding with senators. Video was shown of the rioters spewing vulgarities at Pence as they headed to the Capitol. Nine people died in the uprising and its aftermath.

In a further development, Thompson said Thursday the panel would seek an interview from Virginia “Ginni” Thomas, wife of Supreme Court Justice Clarence Thomas, amid disclosure of the conservative activist’s communications with people in Trump’s orbit before the attack . He did not give a timetable for this.

“It’s time for her to speak up,” Thompson told reporters before the hearing.

Before the hearing, Pence’s former chief of staff, Marc Short, said his boss was determined to remain at the Capitol that night and finish work, despite the threats.

“He knew it was his job to stay at his post,” Short told CNN on Wednesday.

Short said Pence didn’t want the world to see the vice president exit the Capitol when “a hallmark of democracy” is under siege.

The panel’s year-long investigation reveals Trump’s final weeks in office, when the defeated president persisted in the “big lie” of a rigged election even when those around him — his family, his top aides, officials at the highest level of government — told him he did simply lost the election.

Former Attorney General William Barr, who resigned in late 2020 rather than being part of Trump’s plans, previously testified that the president “detaches himself from reality” when he believes the lies.

Using 1,000 interviews and some 140,000 documents, the committee connects the dots and shows how Trump’s false claims of voter fraud became a rallying cry when he called thousands of Americans to a Jan. 6 rally in Washington and then sent them to Capitol Hill to watch “fight like hell” for his presidency.

More than 800 people have been arrested in the Capitol siege and the panel is considering filing a criminal complaint against Trump with the Justice Department. No president or former president has ever been indicted by the Justice Department, and Attorney General Merrick Garland has said he and his team are following the proceedings in Congress.

Thursday’s hearing unveiled Eastman’s plan to get states to send alternate lists of voters from states Trump has disputed, including Arizona, Georgia, Michigan, Pennsylvania and Wisconsin. With competing plans for Trump or Biden, Pence would be forced to reject them and hand them back to the states according to the plan to solve the problem.

The committee will address the role of extremist groups and others who have responded to Trump’s call to Washington in upcoming hearings. Leaders and others from the Oath Keepers and Proud Boys face rare sedition charges for their role in the attack on the Capitol.

Several members of Congress are also under scrutiny, including Rep. Barry Loudermilk, R-Ga., who the committee has asked for an interview to discuss a tour of the Capitol he gave to a group of the day before the attack people through basement tunnels.

The panel is also investigating several candidates for elected office, including the Republican nominee for governor in Pennsylvania, who was among the rioters.

The panel, which is expected to issue a final report on its findings later this year, intends its work to set a record for the history of the most violent attack on the Capitol since the War of 1812. January seems to have divided many Americans. Congress fragmented over the formation of the committee, which most Republicans opposed.

The two Republicans on the panel, Cheney and Illinois Rep. Adam Kinzinger, were shunned by the GOP.

Associated Press writers Kevin Freking and Eric Tucker in Washington and Farnoush Amiri in Los Angeles contributed to this report.

Say it with your chest. Here are the 19 best Juneteenth T-shirts of the weekend

Lyft driver shot, killed in downtown Seattle was a father of six