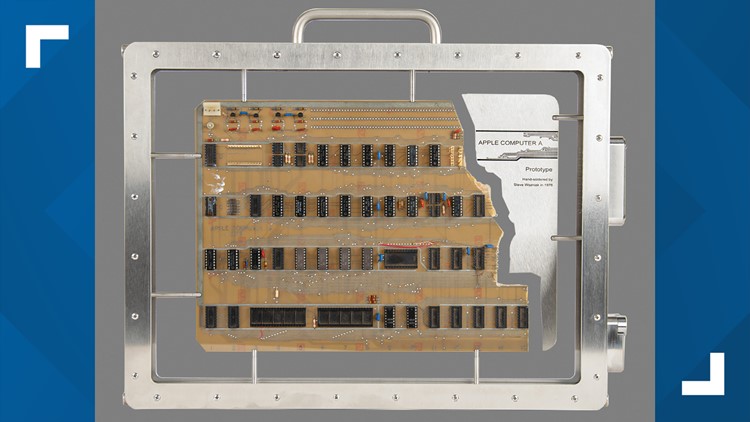 A Bay Area collector bought what the auction company called “the holy grail of Steve Jobs and Apple memorabilia.”

BOSTON — An authenticated Apple 1 computer prototype from the mid-1970s has sold for nearly $700,000 at auction.

The prototype was used by Apple co-founder Steve Jobs in 1976 to demo the Apple-1 to the Boston-based RR Auction, Paul Terrell, owner of The Byte Shop in Mountain View, California, one of the world’s first PC shops, said in a statement.

RELATED: If you have an iPhone, you should probably update it as soon as possible. Here’s how.

A Bay Area collector who wished to remain anonymous gave up the hammer for $677,196 Thursday, the auctioneer said.

“There’s no Apple 1 without this board – it’s the holy grail of Steve Jobs and Apple memorabilia,” said Bobby Livingston, executive vice president of RR.

The board was matched to Polaroid photographs taken by Terrell in 1976 showing the prototype in action. It was also reviewed and authenticated by Apple 1 expert Corey Cohen, whose notarized 13-page report accompanied the sale.

The prototype sat on the Apple Garage lot for many years before it was handed over to the seller by Jobs about 30 years ago.

Given its age, perhaps unsurprisingly, the prototype isn’t in like-new condition.

“Some of the ICs were pulled out of their sockets, as was the microprocessor and other components, presumably for use in early production Apple 1 computers,” RR’s description reads, adding that the board has cracks.

According to the company’s website, a new first-generation iPhone cost $35,414 on the same day.