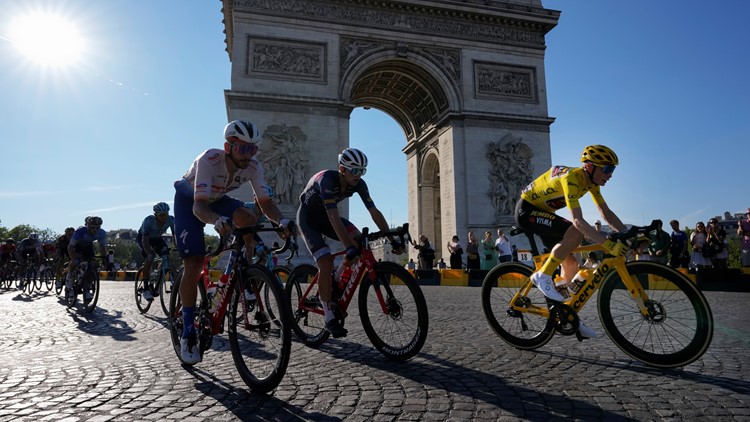 Jonas Vingegaard transformed himself from a talented rookie into a dominant leader in three weeks of epic racing to win his first Tour de France title.

king of the mountains Champion on the Champs Elysees.

Jonas Vingegaard transformed himself from a talented rookie into a dominant leader in three weeks of epic racing to win his maiden Tour de France title on Sunday.

The 25-year-old Vingegaard, who finished second to Pogacar on his first Tour last year, excelled in the scorching heat that engulfed France this month and prevailed in a thrilling duel with Pogacar, the big favorite at the start, as the winner of the des race.

Jasper Philipsen won Sunday’s final stage – a mainly convoy ride through Paris to the Champs-Elysees – in a sprint ahead of Dylan Groenewegen and Alexander Kristoff.

Vingegaard stepped in to replace Tom Dumoulin in the Jumbo-Visma squad last year. It was a revelation for Vingegaard as he realized he could be in contention for the overall title after dropping Pogacar in the famous climb of Mont Ventoux, but his Slovenian rival was at his peak and largely untouchable.

A year later, Vingegaard was at the top of the podium after building his triumph with two phenomenal rides in the Alps and the Pyrenees.

The official overall margin for victory was 2 minutes and 43 seconds, but Vingegaard slowed towards the end of the stage to celebrate with his teammates, crossing Pogacar well behind. 2018 Tour Champion Geraint Thomas was third, 7:22 behind.

Three weeks ago, Team Jumbo-Visma started the race in Copenhagen with two leaders – Vingegaard and three-time Spanish Vuelta winner Primoz Roglic. But Roglic’s challenge suffered a setback when he suffered a dislocated shoulder and lost more than two minutes to Pogacar on the race’s cobbled fifth stage, leaving Vingegaard in the role of lone leader.

From that moment on, Vingegaard has more than exceeded expectations.

On the first major mountain stage, up the Col du Granon, he made clear his intention to take the race leader’s yellow jersey from Pogacar, who fell more than two minutes behind that day. After conquering the famous tunic during a stage that included three alpine monster climbs, Vingegaard kept it to the end.

With the help of teammates including the versatile Wout Van Aert, Vingegaard responded to Pogacar’s relentless attacks day in, day out. Such was his dominance in the mountains that Vingegaard claimed the King of the Mountains jersey in addition to his overall victory – not bad for a rider coming from a country whose highest point is barely 170 meters above sea level.

Vingegaard and Pogacar have clearly been in a class of their own this year as their closest rival, Thomas, has been reduced to a mere spectator in the battle of the leaders.

Vingegaard delivered his decisive blow in the Pyrenees, scoring a second stage win in the Hautacam ski area. There, the Dane responded to a series of attacks from Pogacar, eventually dropping the Slovenian in the final major mountain stage of this year’s race to extend his overall lead to more than three minutes.

Pogacar cracked with about four kilometers (2 1/2 miles) to go on the final climb, with his hopes of winning a third consecutive title all but over. He fought to the end but Vingegaard was again the strongest in Saturday’s individual time trial to effectively secure the title.

“The fight between me and Jonas for the yellow jersey was very special,” said Pogacar. “I think we have some very interesting years ahead of us in the next two or three years. Jonas has stepped up his game this year.”

The slightly built Vingegaard might not be as gifted as Pogacar who has shown in recent years his ability to win Grand Tours as well as the most prestigious one-day classics.

But Vingegaard sure learns fast.

Vingegaard did not experience his first ascent until he was 16 years old. However, his climbing skills did not go unnoticed for long.

After setting a record time climbing the Coll de Rates during a training camp in Spain with his former team ColoQuick, he joined Jumbo-Visma in 2019 and improved quickly. On his first Tour last year, he showed decent leadership after Roglic fell in the race and followed that up with a cold-blooded ride to victory this summer.

The growing rivalry between Pogacar and Vingegaard has spawned new racing scenarios that have excited fans.

Both men were endowed with strong teams capable of controlling mountain racing, an essential element that has been a hallmark of powerful Ineos teams over the past decade. But on many occasions both Pogacar and Vingegaard relied only on themselves at high altitude and fought each other on an equal footing.

Pogacar also brought a touch of old-fashioned romance with his ranged attacks. At 23 years old, the UAE Emirates team has a bright future ahead of them.

Vingegaard became the first Dane to win the Tour since Bjarne Riis accomplished the feat in 1996 at a time when doping was rampant in cycling.

In 2007, after retiring from cycling, Riis admitted to using the blood booster EPO from 1993 to 1998, including during his Tour win.

When asked if his team should be trusted, Vingegaard said he and his teammates are “super clean, all of us”.

“None of us are taking anything illegal,” he added. “I think why we’re so good is the preparation we’re doing. We’re taking high-altitude camp to the next step.”

World Cup qualifier is ‘like a moment of hope’ for Ukraine

Tuchel, Conte start Chelsea, Tottenham’s latest installment of the Battle at the Bridge

“Even a literal no-hitter can’t stop the Reds from losing” “Are we impressed or depressed?”