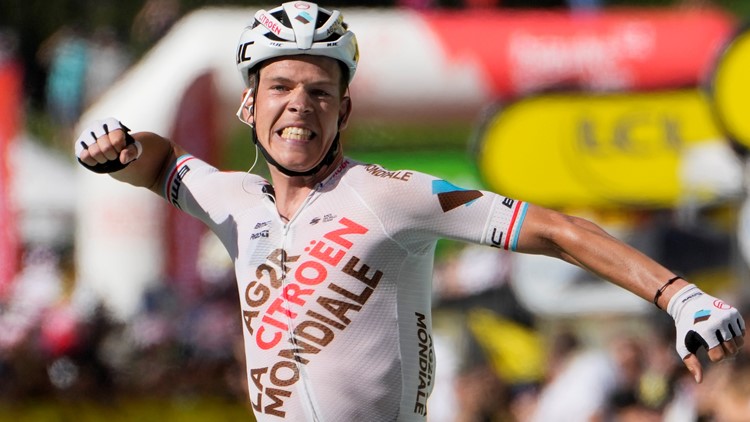 Jungels, 29, who drives for the AG2R Citroën Team, set off from Châtel les Portes du with almost 65 kilometers (40 miles) remaining of the mountainous 193-kilometer (120-mile) route from Aigle in Switzerland to the ski resort solar.

The Luxembourg native had time to sit up and stretch his arms before thrashing the air with joy as he crossed the finish line 22 seconds ahead of Jonathan Castroviejo and 26 seconds ahead of Carlos Verona.

The win caps a comeback for Jungels after an unforgettable year. Struggling with back problems and a head injury sustained in a fall earlier last season, he then missed the Tour and the Summer Olympics following surgery.

“It’s hard to say what I’m feeling right now. I’m just overwhelmed to be honest. It’s huge, that’s what I came here for,” Jungels said. “After a few years of struggling, a very tough last year with surgeries and everything, trying to get the win that way, it’s my racing style, my style of getting the win.

“So I’m super happy, I saw that the form was getting better day by day, but to do something like that … I knew I had to try from a distance because on the last climb it wasn’t possible to pull away from the favourites.”

Pogačar and Jonas Vingegaard sprinted to the finish line to gain a three-second lead over their rivals for the overall lead. The Slovenian stayed 39 seconds ahead of Vingegaard but extended his lead over 2018 winner Geraint Thomas to 1:17.

“The team is really, really strong, they’ve shown each of them that they’re getting stronger,” said Pogačar, who drives for UAE Team Emirates. “The last few days have also shown that we can control this race. So I’m super happy and proud.”

Jungels, Castroviejo and Verona were part of a large breakaway that formed just after the first of four categorized climbs of the day.

Jungels attacked near the top of the penultimate climb, the top category Col des Mosses, followed by Simon Geschke. The pair reached the summit together, 25 seconds behind the chasing group.

But Jungels was faster on the descent and was able to outperform his competitors. He had built up a nearly two-minute lead over the chasing group and over three minutes over the peloton at the start of the final climb, the Category 1 Pas de Morgins.

Cheered on by raucous fans lining the streets, French rider Thibaut Pinot attacked and came within sight of Jungels but ended up missing out on a podium finish.

Pogačar and Jonas Vingegaard sprinted to the finish line to gain a three-second lead over their rivals for the overall lead. The Slovenian stayed 39 seconds ahead of Vingegaard but extended his lead over 2018 winner Geraint Thomas to 1:17.

Monday is a rest day. Tuesday’s stage 10 has four categorized climbs on the 148.1-kilometer route from Morzine Les Portes Du Soleil to Megève.

The race ends on July 24 in Paris.

Adam Silver apologizes to Suns employees, says he takes responsibility for NBA letting them down