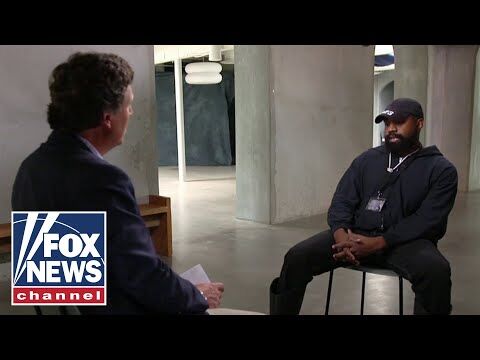 Kanye West, who has been embroiled in controversy this week after wearing a White Lives Matter t-shirt at Paris Fashion Week, appears not to be giving up easily.

On Thursday, the rapper – real name Ye – found a soul mate on the conservative Fox News network. He appeared on “Tucker Carlson Tonight” for a seated interview filmed in West’s Los Angeles office; the second part of the interview will be broadcast on Friday.

West and Carlson addressed everything from the fallout from West’s support of former President Donald Trump to abortion (“I Am Pro-Life”) to his ex-wife Kim Kardashian. West even managed to mention musician Lizzo and Tesla CEO Elon Musk.

Sporting a beard, a black hoodie, a cap that read ‘2023’ and a lanyard with an ultrasound image of a fetus, West told Carlson he found the divisive White Lives Matter shirt entertaining.

“I thought the shirt was a fun shirt,” he said. “I found the idea of ​​me wearing it funny.”

He said he discussed the controversial attire with his father, who he said was a former member of the Black Panther Party. West said his father noticed it was just a “black guy stating the obvious.” He then repeated, “The answer to why I wrote ‘White Lives Matter’ on a t-shirt is because they do. It’s the obvious,” echoing a similar sentiment he posted on Instagram on Wednesday.

His Paris Fashion Week outfit wasn’t the first time West took heat for his clothes. During the 2016 election, the rapper was regularly spotted wearing the red “Make America Great Again” hat associated with Trump. Earlier in Thursday’s interview, West Carlson said the accessory made him a target.

In the hours leading up to his interview with Carlson, West posted an Instagram video of the presenter visiting the new Yeezy office to try out unfamiliar drinks and test the fashion entrepreneur’s new 3D-printed shoes.

West’s conversation with Carlson comes amid much controversy. On Monday, West turned heads when he wore a “White Lives Matter” shirt that echoed conservative commentator Candace Owens in Paris. Not only has he weathered critics on Twitter, but he has also weathered fashion figures like Gigi Hadid, Jaden Smith and Vogue editor Gabriella Karefa-Johnson.

On social media, Hadid called West a “bully” for saying in an Instagram post that Karefa-Johnson was “not a fashion person” and for making fun of the boots the editor wore at Paris Fashion Week wore.

Vogue then released a statement in support of Karefa-Johnson on Wednesday.

“She was personally attacked and bullied,” the magazine’s statement said. “This is unacceptable. Voices like hers are needed now more than ever, and in a private meeting with Ye today, she once again spoke her truth on how she felt best, on her terms.”

Speaking to Carlson, West said the backlash was “a staging.” But then he turned his feud with Karefa-Johnson into a comment about his “good friend” Lizzo and her body.

“When Lizzo loses 10 pounds and announces it, the bots … attack her because she’s lost weight, because the media wants to give the impression that being overweight is the new goal, when in fact it’s unhealthy,” West said. “If someone finds it attractive, to each their own. It’s actually clinically unhealthy. And for people to encourage that is demonic.”

When Carlson asked the rap mogul to explain his stance on body diversity, West claimed that “it’s genocide against the black race. They want to kill us any way they can.”

Elsewhere in the interview, West spoke about Kardashian and her connections to the Clinton family. He claimed that “he didn’t realize how close my own wife was to the Clintons,” presumably referring to Bill and Hillary Clinton. Carlson then asked if the rapper felt pressure from his wife and her political connections.

“Yes, there was manipulation,” he said. “Not saying I like Trump was a form of manipulation.”

The first segment of the two-part interview ended with West opening up about his “potential” presidential nomination in 2024 (he also ran for 2020), Musk (“he’s a great team player”), his contentious relationship with the Kushners, and how he’s “bullied by Hollywood.” ‘ became ‘biting his tongue’ over his support for Trump.

But West also hinted that his relationship with Trump could be complicated at times.

“Older whites are quick to classify a black person based solely on the fact that we are black. Even Trump, a person we would consider a friend of mine, when I went to the White House I called him afterwards to get Rocky out of jail as soon as possible. And one of the things he said to me was, ‘Kanye, you’re my friend. When you came into the White House, my black approval rating went up 40%.’

Apples M1 MacBook screen: Consumers wondering what is wrong with their popular laptops

One Piece Sets Sail On Its Final Saga Next Month