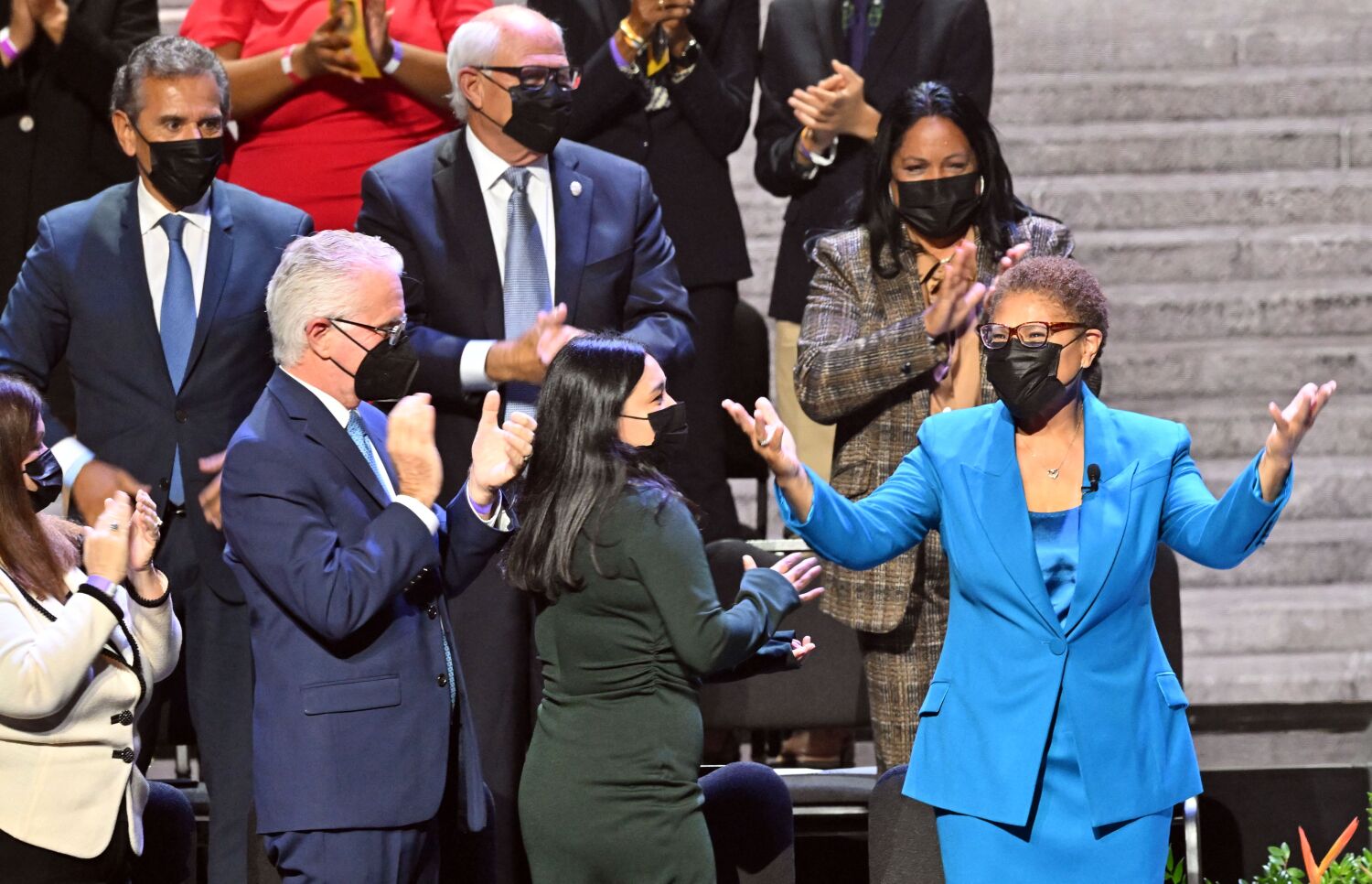 After 241 years, the country’s second largest city has its first female mayor.

Karen Bass was sworn in as the 43rd mayor of Los Angeles by Vice President Kamala Harris on Sunday afternoon while thousands of Angelenos cheered at the Microsoft Theater downtown during a jubilant ceremony full of musical performances.

The crowd erupted in applause after Harris said the words “Madame Mayor” and stayed on their feet as Bass walked to the podium.

Bass used her history-making moment to emphasize her place in a constellation of barrier-breaking California women. The first black woman elected mayor of Los Angeles was joined by the first woman vice president, the first woman to head the California Senate, and California’s first assistant governor.

In a speech prepared for the presentation, Bass Harris, Atkins and Lt. gov. Eleni Kounalakis, saying, “Making history with each of you today is a monumental moment in my life and for Los Angeles. The four of us – Californians, leaders, women.”

“And let’s not forget our all-female board of directors! We will all make so much history together in a state that has enshrined in our constitution the right of women to choose what happens to their bodies!” said Bass.

Bass’s remarks described the moment as a “watershed moment” in the history of a city hit by the pandemic, a rapidly changing economy and high cost of living, climate change and the homelessness crisis. But, she said, “our magic, LA magic, is still there.”

She planned to make an urgent appeal to Angelenos “to welcome housing in every neighborhood,” detailing her focus on day one on homelessness.

The mayor’s oath of office was preceded by musical performances by Mary Mary, Chloe Bailey and Las Cafeteras and comments by Atkins and UCLA Labor Center director Kent Wong.

Amanda Gorman, who became the youngest poet in history to write and recite a play at a presidential inauguration in 2021, read an original poem.

The event is ceremonial. Bass was sworn in privately by Los Angeles City Clerk Holly Wolcott Saturday and will not officially succeed Mayor Eric Garcetti until 12:01 a.m. Monday.

Sunday’s ceremony was originally planned for the steps of City Hall, but a storm system thwarted those plans and necessitated a move indoors. Bass, City Council members, and other dignitaries sat in rows on the theater’s stage, behind them a giant screen showing an image of City Hall from the outside.

People swarmed around Gov. Gavin Newsom and first partner Jennifer Siebel Newsom, seeking selfies as the couple weaved through the crowd ahead of the ceremony. The governor told the Times that “optimism, double the odds and partnership” were behind his decision to attend Bass’s swearing-in ceremony.

“At the end of the day, it’s pretty clear that the scale of some of the challenges we face requires working at a different level of collaboration and collaboration,” Newsom said. “So it’s this ghost that’s bringing me down.”

Developer Rick Caruso outplayed Bass by more than 11 to 1 during the nationally watched race that preceded her victory, but the six-term congresswoman eventually triumphed by a nearly 10-point margin over Caruso.

This mandate will be helpful as she takes control of a crisis-ridden city where tens of thousands of residents lack permanent housing and trust in local government is at an all-time low.

Less than 48 hours before the inauguration, embattled councilor Kevin de León made national headlines for a physical altercation with an activist at a holiday celebration for local children.

The scuffle followed months of scandal at City Hall, where business was upended in early October after The Times reported on a leaked audio recording of De León and other city leaders making racist and derogatory comments about a variety of groups.

Bass takes office after a campaign that focused intensely on one issue in particular – homelessness and how to help the thousands of people who sleep on the city streets or in shelters each night.

She has long promised to declare a state of emergency and in her remarks said the move will take place on Monday. It must be re-approved by City Council every 30 days.

Bass said she plans to start her day Monday at the city’s Emergency Operations Center.

“My emergency declaration will recognize the gravity of our crisis and will blaze new trails to maximize our ability to urgently bring people inside, forever,” she said in her prepared remarks.

“It will create the structure necessary for us to have a real, unified, citywide strategy that puts us on the path to solving homelessness.”

Bass said that to adequately address the crisis, the city must have “a single strategy to unite our city and county and engage the state, the federal government, the private sector and all other stakeholders.”

During her abbreviated transition, Bass made preparing for this emergency declaration a priority. It included several meetings with people who are experts in different facets of the homeless crisis and members of their transition counseling team.

Last week, she named Mercedes Márquez, a former local and federal housing officer, as her director of housing and homelessness solutions.

Bass consultants asked city officials, nonprofits, and community offices about the locations where camps have sprung up and are populated by people in dire need of assistance.

The goal of the emergency directive will be to expedite and centralize the process of deploying resources to help raise money and redirect resources to address the homeless crisis.

“Vice President Harris, Governor Newsom — my colleagues in Congress here today — look for me on your caller ID,” Bass said.

There were also performances by the chamber choir from Bass’ alma mater, Hamilton High School, and a poem read by Los Angeles poet Sophie Szew.

The event is funded with private funds raised by the Bass campaign and administered by the Mayor’s Fund for Los Angeles – a nonprofit organization founded by Garcetti that funds civic programs and raises money from corporations, foundations and individuals. According to Bass spokesperson Zach Seidl, the event will not use any pre-existing Mayor’s Fund funds.

The Bass team has not yet announced any sponsors for the event or the estimated cost.

Get Ready for Republican Oversight

Maryland knocks off UConn for first time in program history

Twerking, Twinkies and cigarettes: Reddit users reveal the ‘guilty pleasures’ they hide from their spouses