For years, we’ve known that the British royal family often joins Hollywood’s biggest stars at premieres, awards ceremonies and more. But last night the Cambridges themselves were treated to the glitz and glamor of the limelight as they attended the London premiere of Top gun: Maverick. Despite some stars on the red carpet, all eyes were on Kate Middleton, who looked stunning in the photos taken at the event. 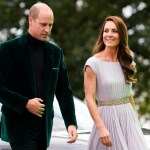 The Duchess of Cambridge looked absolutely flawless as she and husband Prince William walked hand in hand on the red carpet. Kate sported a gorgeous Roland Mouret gown, which featured a sleek black and white off-the-shoulder neckline. Once a fashionista, Kate adorned her look with sparkling star drop earrings. Speaking of stars, there was a Hollywood actor who joined the royal couple for the evening carnival – and even asked Kate for help getting up the stairs!

That’s right, Tom Cruise gallantly extended his hand to the Duchess of Cambridge as he joined Kate and William at the launch. Now, we should say that both Tom and William look pretty dapper in their tuxedo. But it was Kate who really stole the show at the London premiere. However, the pair’s most recent debut is nothing new for the Duke and Duchess of Cambridge.

In fact, William and Kate have made a few appearances with some of Hollywood’s biggest stars from time to time. In the last year, the royal couple also attended the premiere of There’s no time to die, which features Daniel Craig’s final appearance as James Bond. At that premiere, the royal couple was attended by Prince Charles and Camilla, Duchess of Cornwall. But last night was all about William and Kate, and the Duchess of Cambridge has completely kept her figure on the red carpet and is looking as stunning as ever.