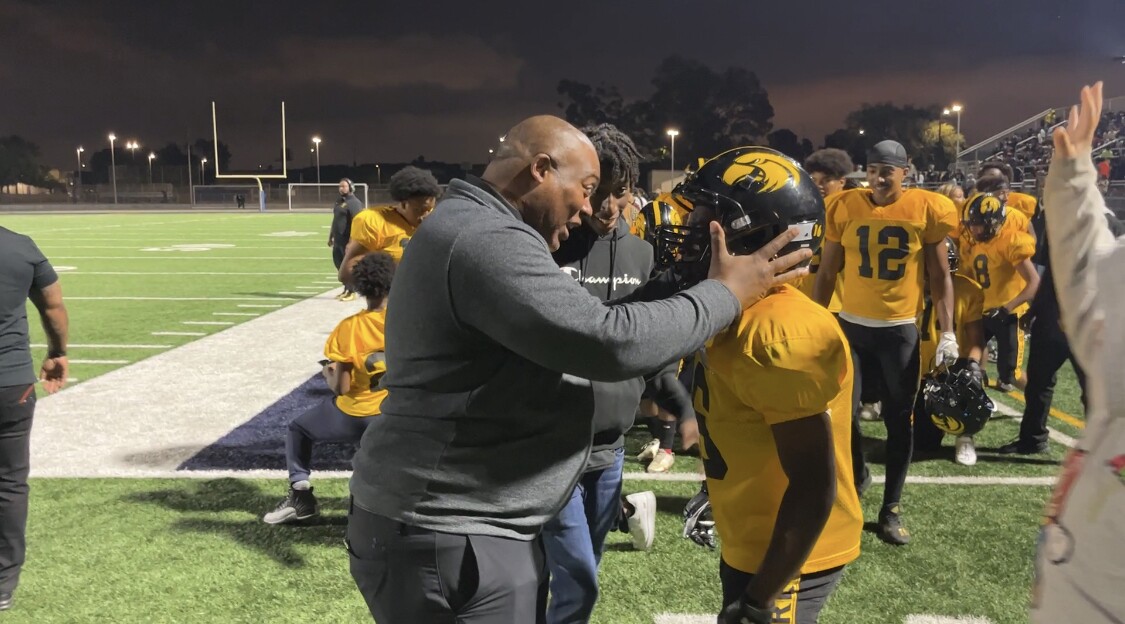 It started with an earth-shattering backflip on Friday.

As they sat in their classrooms at lunch, the noise built up outside their windows, King/Drew High English teacher Deonte Townes recalled. Teachers began sticking their heads out to see what the fuss was about, like Brooklyn natives peering out from their fire escapes in their apartment, Townes chuckled.

It was a rally of encouragement like no other. To thunderous cheers, the Cheer Squad prepared pyramid throws. Football players gathered in a dance circle and hit the “curry sway”. And senior Jesse Philphott performed a backhand spring-in-clean flip that sent the school into an uproar.

The mood soared a few hours later during the show’s very first game, a 36-6 win over View Park. A sea of ​​black and yellow swept the entire block at Los Angeles Harbor College, contributing to a packed home crowd throughout the night.

“Damn,” said 2006 alumnus Gary Stouman on the sidelines, slapping Chuma Obiona’s former classmate on the hand, “we have a soccer team!”

It took decades for alumni like Stouman and Obiona to beg for a team during their college days. It still didn’t seem true to people at the Compton and Watts supermarkets where coach Joe Torres visits with his Golden Eagles gear.

Students went elsewhere or gave up their dreams altogether. It has shattered the promise of the likes of Brandon Crook Jr., who almost went to Gardena Serra High to play soccer in 2016 but reluctantly accepted his parents’ desire to attend King/Drew for education, father Brandon Crook said .

“At that point he told us he was going to hang up his cleats,” Crook said, “and pick up his hands for an operation.”

During his eight-year tenure, King/Drew Headmaster Reginald Brookens noticed that students were moving to play football elsewhere. Four years ago, he said, the school seeded the idea of ​​starting a program, which was confirmed last fall along with Torres’ hiring.

He was hired not only as a coach but also as an architect. Torres led the inaugural teams at St. Frances Academy in Baltimore – now one of the nation’s premier programs. He preaches discipline, unity, his players organize themselves into two lines every time they run on and off the field.

“What did we talk about?” Torres said to Elijah Mosley after scoring a touchdown on Friday, clutching the senior’s head with both hands. “I think you believe, don’t you?”

Not all creases are ironed out. King/Drew wore training jerseys Friday night and it will be two to three years before they have a true home field, sharing a property purchased from neighboring Charles R. Drew University.

But the team looked remarkably close to a finished product. Senior wide receiver Dylan Reed caught a long touchdown pass on the right touchline in the second quarter, the entire bench flocked down the touchline with him to bully him after he crossed the goal line. Junior Sadiq Henry dominated on both sides of the ball, a standout in basketball who is sure to catch the recruits’ attention.

“This is the beginning of something wonderful,” Henry said.

After just one game, King/Drew has all the ingredients for a future City Section powerhouse – tremendous dedication at a time when many other programs have been seeing numbers in free fall.

With once-famous City programs like Carson, Banning, Crenshaw and Dorsey all emphatically losing in Friday night’s opening games, a new champion could rise in Willowbrook.

“The buzz,” Torres said Friday night as he left the field, “is going to come out.”

‘My goal is to normalize’

Photos | All Eyes on Serena