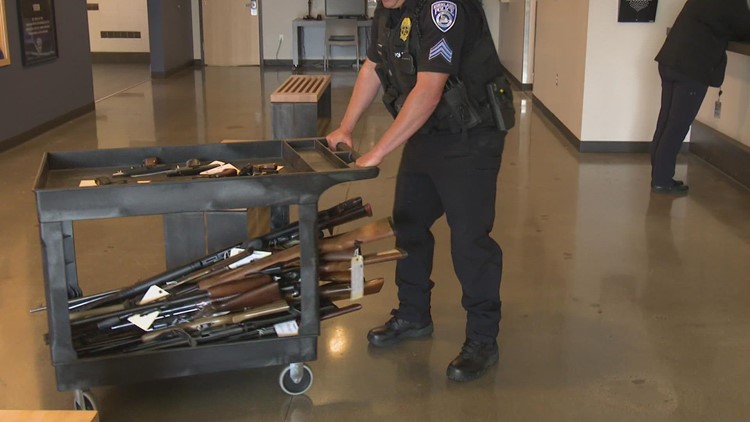 The goal is to make sure unwanted guns don’t fall into the wrong hands.

KIRKLAND, Wash – For the third time this year, the Kirkland Police Department held a “Gift Card Exchange” at headquarters on Saturday.

The goal is to make sure unwanted guns don’t fall into the wrong hands.

George Card said: “Pretty good idea, I did it for free but they would give us $100 which is a bonus.

It’s an award for gun owners who turn in unwanted weapons at the “Guns for Gift Cards Exchange” at the Kirkland Police Department.

“They’re old long guns in a cupboard, the laws have changed, you have to lock them up, I don’t own a gun safe, so I don’t want to be held responsible and they’re safer here at my house,” said Card.

“There is a chance that a house, a family home could be stolen, these guns could fall into the wrong hands, criminals if you will, will now take these guns and use them.” use them for the wrong reasons,” said Cody Mann, KPD’s Training Sergeant.

Mann said gift cards cost between $25 and $250, depending on the type of gun being redeemed. Mann said the KPD will look at the serial number of each gun, and unless found to be involved in a crime, it will be destroyed.

“We don’t have a problem with responsible gun owners who want to maintain their guns, for hobby, hunting or for self-defense, but this situation is more about people who are uncomfortable. with these guns or just don’t use them, says Mann.

“Even if it’s just a gun being carried on the street, it’s going to be used for the wrong reasons and for the wrong purpose, it’s worth it,” Mann said.

KPD officials said they also plan to conduct an in-person gun safety class before the end of the year.

How to make your 2023 New Year’s resolutions stick