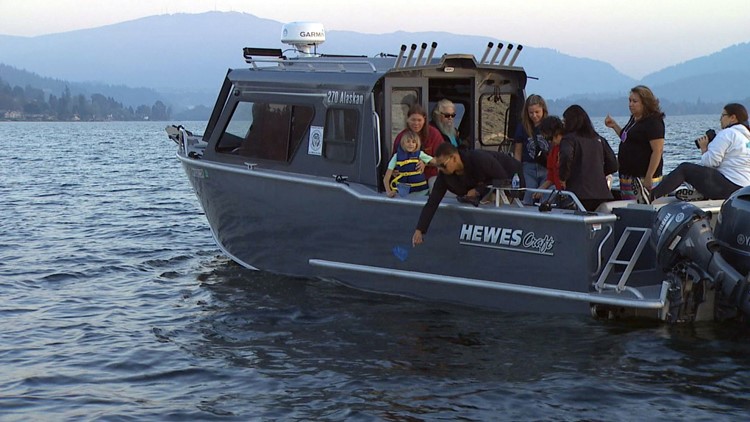 Last year, the local population of Kokanee salmon grew to more than 2,000.

ISSAQUAH, Wash – With its signature red color, the Kokanee, a freshwater trout, is making a comeback although experts admit they don’t know exactly why. Last year, the local population amounted to more than 2,000 fish.

The population spiked after hitting a historic low.

“What we’ve had over the last five years is the lowest we’ve ever seen on record, and I think it’s under 20 by 2017,” Falcone said.

Wednesday is an example of human intervention designed to fortify fish populations with a long and long history in the Pacific Northwest, especially for the Snoqualmie Tribe.

“We’ve survived in this land off these fish all year round and here we are,” said Christopher Castleberry, Snoqualmie Tribal Council Member.

Tribe members blessed a catch of 150 salmon before returning them to Sammamish Lake. Baby trout or “baby fish” as they are called are purposefully introduced at dusk to give them a fighting chance.

The goal is to bring the Kokanee Salmon population to a level that is self-sustaining.

The Kokanee people have experienced a lot of land in their young lives. These fish, like eggs, were airlifted to a hatchery in King County last winter. By the end of October, more than 8,000 young Kokanee salmon will be returned to Sammamish Lake.

Their parents, the wild Kokanee Salmon, have been released into the wild and cared for in a controlled environment on Orcas Island.

A lot of work has been done to keep native fish populations from becoming part of history.

Castleberry said: “Proud to have done the work of our peoples who were here before me. “I think just knowing that it helps us we need to help them and I feel like a small part of myself is lost because of that. If there’s something I can do to maintain and increase those numbers, I’ll do it. And until that day, I will continue to fight. “

‘Shaqtoberfest’ coming to the Queen Mary this fall