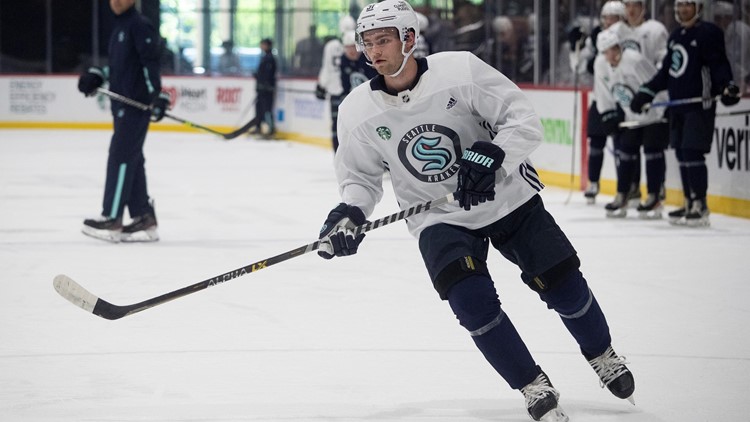 For the players and staff who were there about a season ago as the Kraken raced to debut as an expansion franchise, what happened on Thursday felt normal.

SEATTLE (AP) — For the players and staff who were there about a season ago as the Seattle Kraken raced to debut as an expansion franchise, what happened Thursday felt nothing short of normal.

The Kraken began training camp with a group of players who had previously been on the ice together but were now able to be together in the locker room with COVID-19 protocols lifted to begin the process of improving what has been challenging and disappointing first season.

Thanks to some key off-season additions, the Kraken should be far better than the team that finished last season 27-49-6, including a miserable nine-game losing streak in December and January and an 11-loss-in-12-game stretch in February and march.

It was a season that looked like most expansion seasons in the last 30 years, save for Vegas’ debut season.

But what Seattle faced was even more difficult. Between health and safety protocols, the unfamiliarity of never having played together, and the newness of an expanding franchise, nothing about last year’s inaugural training camp felt normal.

And it carried into the season.

“Last year it was hard with COVID and everything just sort of getting to know each other. Everyone was a bit scared that hanging out means you have to miss about three or four weeks because of the COVID protocols,” said goalkeeper Philipp Grubauer. “So off the ice there wasn’t a lot of team building. But now everyone knows each other. Everyone feels comfortable and I think that’s a big part of it.”

The atmosphere for the first day of camp was drastically different this time. A year ago, fans filled the team’s practice facility with excitement for a first look at the league’s newest franchise, and erupted in applause as the first players stepped onto the ice.

There were fans on Thursday, but not in the same numbers or with the same passion. They seem to be taking the same approach as most Kraken to show they will be better this season before jumping full board with a team that should be significantly improved on paper.

“Some of the good things we did last year don’t really show up in the overall points, so we have to improve every little bit of our game,” said coach Dave Hakstol. “And of course we have to show that in the points classification.”

There are many new faces in the Kraken dressing room, including Oliver Bjorkstrand and André Burakovsky. But one of the key pieces for Seattle will be forward Brandon Tanev, who is returning after missing most of last season with a serious knee injury.

Tanev had 15 points in 30 games before suffering a cruciate ligament injury on December 18, 2021 against Edmonton. The injury drained vital energy from Seattle’s lineup and took away a personality that had quickly become a fan favorite.

At the start of the training camp, Tanev was back on the ice without restrictions and restrictions.

“We’ve all been through that, obviously last year was the first season in Seattle,” Tanev said. “But this year is all business from the start. I don’t think there is time to warm up. I think we have to get out of there, we have to compete, we have to prepare for the season.”

Girl, 8, suffers graze wound to head while playing outside of North Philadelphia home