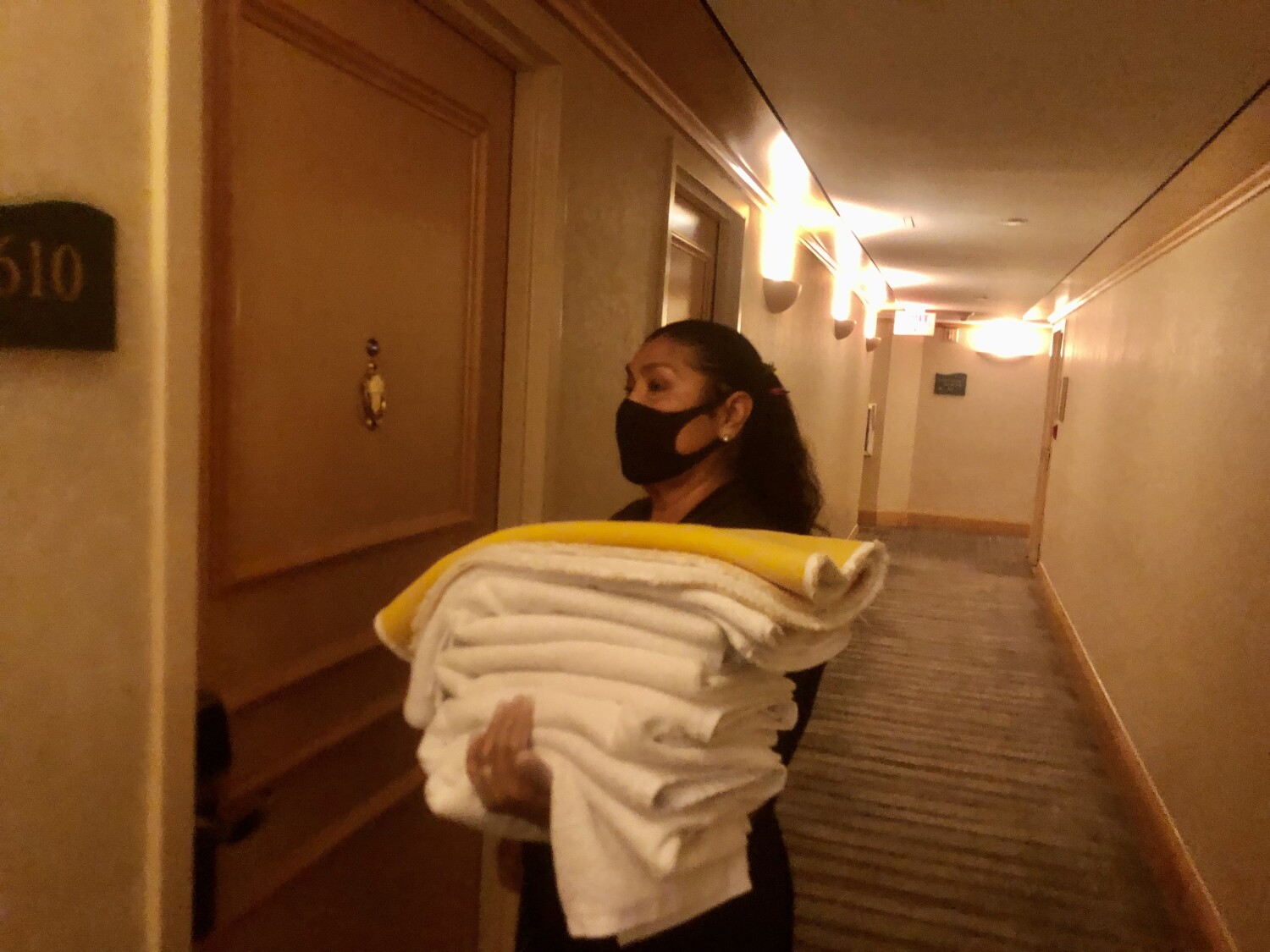 Most hotels in the city of Los Angeles will be required to limit the daily workload of housekeepers, pay overtime under certain circumstances, provide a “panic button” to protect employees. their employees from sexual harassment and eliminate policies that automatically bypass daily cleaning, according to a measure passed Tuesday by the Los Angeles City Council.

Unite Here Local 11, a union representing hotel workers in Southern California, filed more than 110,000 signatures on a petition to put the measure on the city’s November 8 ballot. Instead, the council voted 10 to 3 to skip the voting process and adopt the measure immediately. A second, mostly procedural, vote is scheduled for June 28. The measure takes effect about 30 days later.

The measure comes as Los Angeles tourism leaders hope to see a recovery in the region’s tourism industry, which has been decimated by the COVID-19 pandemic.

In 2019, Los Angeles County welcomed 50 million international and domestic visitors, who spent $22 billion, according to LA tourism officials. But in 2020, at the start of the pandemic, visitor numbers dropped to 27.7 million, with tourism spending dropping to $10 billion. Tourism experts estimate the county will welcome around 40 million visitors in 2021.

In addition to the hotel workers’ measure, the council also approved an increase in the minimum wage for some healthcare workers to $25 an hour. A union group also gathered enough signatures for the bill to be put to a vote this fall.

The hotel management measure has been opposed by hospitality and business trade groups, who told the council on Tuesday the law would lead to higher labor costs, higher room rates and a drop in tourists. , who will be repelled by higher prices.

Heather Rozman, CEO of Hotel Assn. Los Angeles, which opposes the measure, also suggested that by reintroducing daily housekeeping, it would force hotels to use more water during a time of “unprecedented drought.” . At the start of the pandemic, many hotels removed daily housekeeping, saying the move reduced the risk of COVID-19 spreading between hotel workers and guests.

Mandatory daily housekeeping will increase water use, as well as electricity and gas, she says.

The council heard testimony from several housekeepers who packed the council rooms, voiced support for the measure and chanted “Si, se puede(Yes, we can) in the meeting.

The measure was backed by City Councilor Kevin de Leon, who described hotel workers as “the backbone of our economy”.

“They don’t have to wait until November” to apply the measure, he said. “This is a matter of fairness.”

Council members opposed to the measure said it was too early to adopt it without an economic analysis of its impact.

“This is not how this agency makes policy,” said Councilman Paul Krekorian.

The measure is intended to ease the workload for hotel housekeepers, who earn hourly wages below $18 in Los Angeles and suffer some of the highest injury rates among those in the hospitality industry. service.

According to union leaders, the workload of housekeepers has increased as most hotels have not returned to full staff since the height of the pandemic, and daily housekeeping has ended. This means that the housekeepers with few employees have to clean up the garbage and dirt in a few days. and used towels. Unite Here leaders say eliminating the daily cleaning job allows hotels to justify hiring less housekeepers and demanding more from workers who stay.

In January, The Times followed a day in the life of a hotel butler who kept a diary describing harsh working conditions during the pandemic.

Additionally, hotels with at least 45 guest rooms will be required to limit the number of rooms – based on total square footage – that a housekeeper must clean during an eight-hour workday. The square footage limits will be determined by the size of the hotel, the types of rooms, and whether housekeepers have to clean rooms on different floors, among other factors.

Hotels must also provide housekeepers with alarm buttons, devices they can use to summon help in the event of sexual harassment or assault.

Under pressure from unions and workers, the nation’s largest hotels and the country’s hospitality trade group voluntarily adopted a policy in 2018 to give workers a panic button to address such safety concerns.

The Valley Authority for Industry and Commerce, based in the San Fernando Valley, issued a statement opposing the housekeeping measure, saying it would make it more expensive to operate a hotel.

“The reality here is that the Hotel Workers Initiative will cripple hotels that have been fighting to stay afloat through the pandemic,” Stuart Waldman, the group’s president, said in a statement. . “The initiative will force hotels to hire more staff and reduce working hours for existing employees. Expensive labor. Some hotels cannot afford to implement the Initiative.”

Dead by Daylight killers get breakdowns for upcoming dating sim