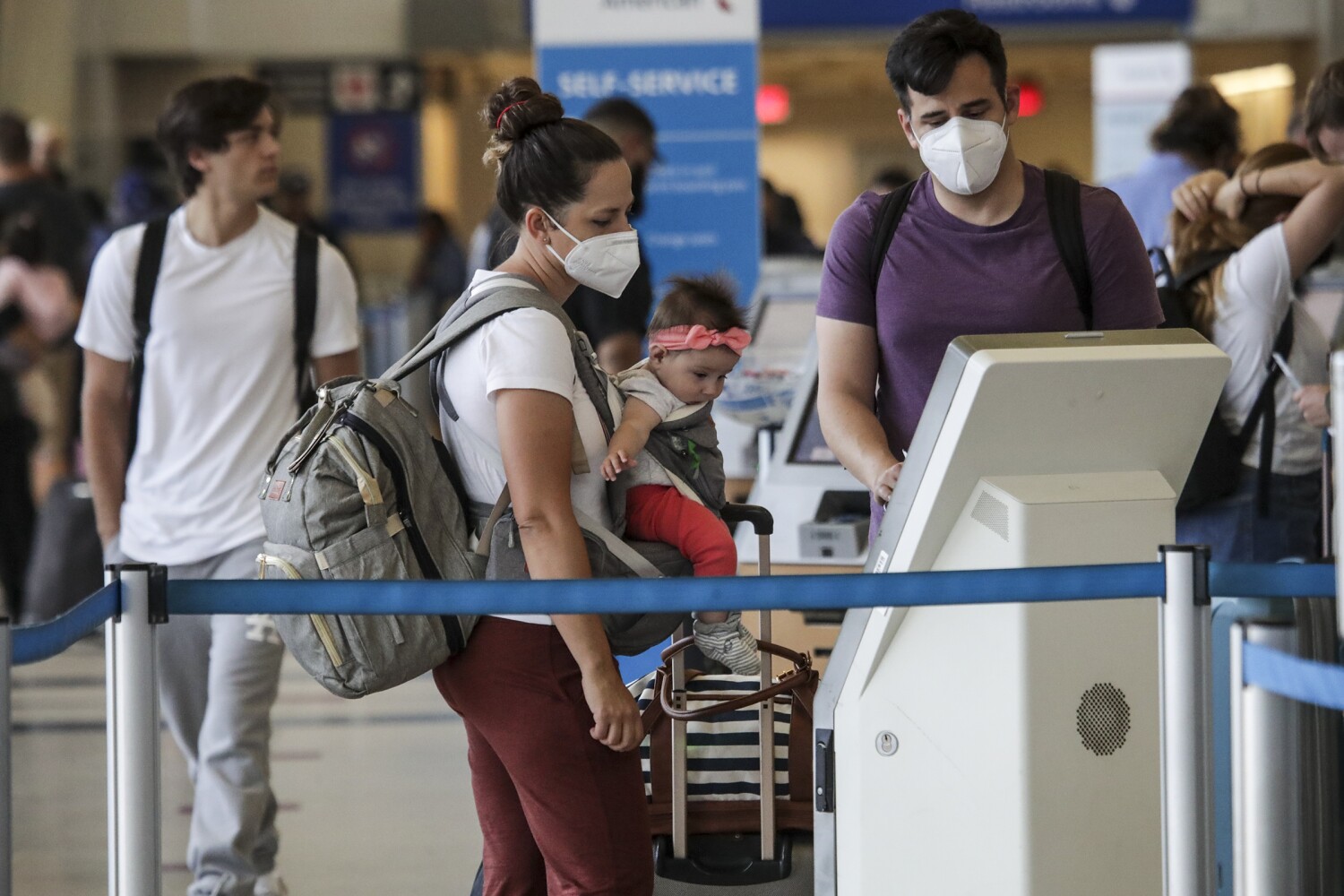 Two Omicron subvariants, BA.4 and BA.5, have become dominant nationwide and appear to be among the most contagious of this pandemic to date.

Coronavirus case numbers have also risen across the country, with the San Francisco Bay Area reporting California’s highest rate. Hospital admissions have also crept in, but hospitals have not reported being overwhelmed. But experts fear the disease could spread more quickly in the coming weeks, putting renewed pressure on the healthcare system.

“Right now, as we go further up, it’s going to get a little bit more into a danger zone with hospitalizations,” with the potential to put a strain on the healthcare system, said Dr. Peter Chin-Hong, a UC San Francisco infectious disease expert.

Too many coronavirus-positive patients can disrupt hospital operations even if they are being treated for non-COVID-19 reasons because resources are needed to isolate them, Chin-Hong said.

One of the biggest concerns about BA.4 and BA.5 is that humans can be re-infected even after suffering from a previous Omicron subvariant. dr Robert Wachter, chair of the UC San Francisco medical school, wrote that this could lead to increased infection rates in the summer and fall.

“In addition, a lot depends on whether a new variant emerges that displaces them. Given the pattern of the past year, it would be foolish to bet against it,” he said wrote over the weekend.

The rise of the latest sub-variant, BA.5, he addedis particularly notable because “prior infection – including an Omicron infection that occurred just in the last month – no longer provides robust protection against reinfection”.

“We’re seeing people like that get reinfected within a month or two,” he added.

Vaccinations and booster shots remain “enormously valuable in preventing a serious case that could lead to hospitalization/death”. Wachter wrote. “But its value in preventing a COVID case or preventing transmission is far less now than it used to be.”

The increasing dominance of Omicron subvariants BA.4 and BA.5 could bring LA County, the nation’s most populous county, even closer to reintroducing a universal mask ordinance for indoor public spaces, perhaps later this month or next month if trends continue .

Experts are urging people to keep up to date with their vaccinations, and that includes a first booster shot or a second booster shot, if that is an option. Vaccination and booster shots have been key factors in keeping hospitalizations relatively modest for the time being.

Don’t wait for an Omicron-specific booster, they said, as its launch will likely be delayed until November to incorporate a vaccine formula designed against the newer Omicron subvariants, rather than the oldest version scientists fear that it would then be relatively obsolete.

“My advice is to go ahead and get a booster now,” Chin-Hong said. Questions remain about exactly how the Omicron-specific refresher will be available in the fall, considering Congress has yet to approve the billions of dollars needed for pandemic control efforts, including money for pre-ordering vaccines .

If federal officials are still paralyzed by limited funding later this year, the Omicron-specific fall vaccine may be “available only to a limited group of people,” perhaps only those ages 65 and older, Chin-Hong said.

“I don’t know what will happen in November. And we know that BA.4 and BA.5 are just starting to rage. So you might as well go and protect yourself against what we know,” Chin-Hong said.

Anecdotally, some residents describe significant discomfort with the recent COVID-19 illness, even if they have not been hospitalized. “My heart rate was so high,” one commenter wrote on Reddit, while others described how their children suffered from fevers that reached 44 degrees.

“It’s either chills where you’re shaking and need a blanket or sweating under the blankets,” wrote another commenter. “The sore throat is like broken glass every time you swallow,” wrote a third.

“It’s very uncomfortable for a lot of people,” Chin-Hong said. He said a colleague of his probably got the infection from her kids, and during her acute illness “she couldn’t multitask anymore…she was kind of at her wits end for a while and didn’t feel normal for a few weeks.”

Long COVID, in which symptoms such as brain fog and fatigue can last months or years, remains a risk even after contracting COVID-19, even in vaccinated and boosted individuals.

Eighty percent of LA County residents have completed their primary vaccination course, but there are still many vaccinates who have not received a single booster shot. Of those aged 5 and over who are eligible for at least one booster shot, 56% have received one.

Among LA County residents age 50 and older who are eligible for a second booster shot, only 33% have received it.

Among those vaccinated who have not received a booster shot, they are more likely to need hospitalization, Chin-Hong said.

Doctors are also warning that relying solely on vaccinations to protect against infection is not enough, and health officials are strongly recommending the use of masks in indoor public spaces.

“The increase in positive cases in fully vaccinated individuals likely reflects the dominance of newer omicron subvariants, which are both more easily spread and able to bypass some of the vaccine’s protection against infection,” said Barbara Ferrer, director of public health at LA County, last week.

Unvaccinated people aged 5 and older were only one-and-a-half times as likely to test positive for the coronavirus as vaccinated people — a group that includes those who were boosted and unboosted — for the 14-day period that ended June 9, Ferrer said .

In contrast, unvaccinated people six months ago were about three and a half times as likely to have tested positive for the coronavirus than vaccinated but not boosted people, according to LA County data for the week period ending Dec. 4.

Despite the reduced effectiveness, “FDA-approved vaccines are actually doing exactly what we need them to do. They prevent serious illnesses and deaths,” Ferrer said.

Put another way, of the nearly 7 million LA County residents who completed their basic immunization series, about 13% tested positive in results sent to government officials, 0.2% were hospitalized, and 0.03% died .

Many people are now getting their positive test results from at-home testing kits, the results of which are not reported to officials. But “even if we double that number — so we can account for those who tested with over-the-counter test kits — many fully vaccinated people have yet to become infected,” Ferrer said.

There has been some debate as to whether younger adults should now be eligible for a second booster shot. Ferrer was among those who urged the U.S. Food and Drug Administration to conduct a new review of the data to reconsider whether more people can get a second booster shot sooner.

Chin-Hong is one of the experts who think it makes sense to open the authorization for a second booster.

“At the very least, it will boost people’s antibodies, although” the boosters aren’t specifically designed to target BA.4 and BA.5, Chin-Hong said. “It will be more convenient for me to just liberalize it for everyone.”

But federal officials have not signaled that they are immediately prepared to expand availability of the second booster shot to people under 50 who are not immunocompromised.

By Tuesday, the case rate was down slightly to 376 cases per week per 100,000 people, but that was likely due to delayed reporting over the bank holiday weekend. The latest case rate was still 9% higher than the previous week.

Last week, LA County recorded its highest weekly rate of new coronavirus-positive hospitalizations since February — 8.3 hospitalizations per 100,000 residents, up from 7.3 the previous week. If that rate reaches 10 or more for two consecutive weeks, LA County health officials plan to introduce a new universal mask mandate in public indoor spaces for everyone ages 2 and older.

The mandate would remain in place until the rate falls below that threshold for two consecutive weeks.

Omicron subvariants BA.4 and BA.5 accounted for an estimated 70.1% of new cases nationwide in the week-ending period through Saturday, according to the CDC. This completes a stunning rise to dominance for the subvariant duo, which just a month earlier was thought to account for just under 16% of new cases.

Omicron has spawned a number of subvariants since it emerged late last fall, and these have largely been characterized by increased infectivity. But “BA.5 is another beast with a new superpower: enough change in spike protein that immunity against either previous Vax or previous Omicron infection (including recent infection) doesn’t offer much protection.” corresponding Guardian.

“As BA.5 becomes the dominant US variant, its behavior will determine our fate for the next several months until it either burns itself out by infecting so many people, or is replaced by a variant even better at it, humans.” to infect,” Wachter wrote on twitter. “Both are not a happy scenario.”

Rapper THE GAME Caught Kissing A Caucasian Actress . . . Are White Girls The NEW WAVE In 2022?

Photos of 90th anniversary of the Hollywood Christmas Parade

Latinas are an emerging force in Orange County politics