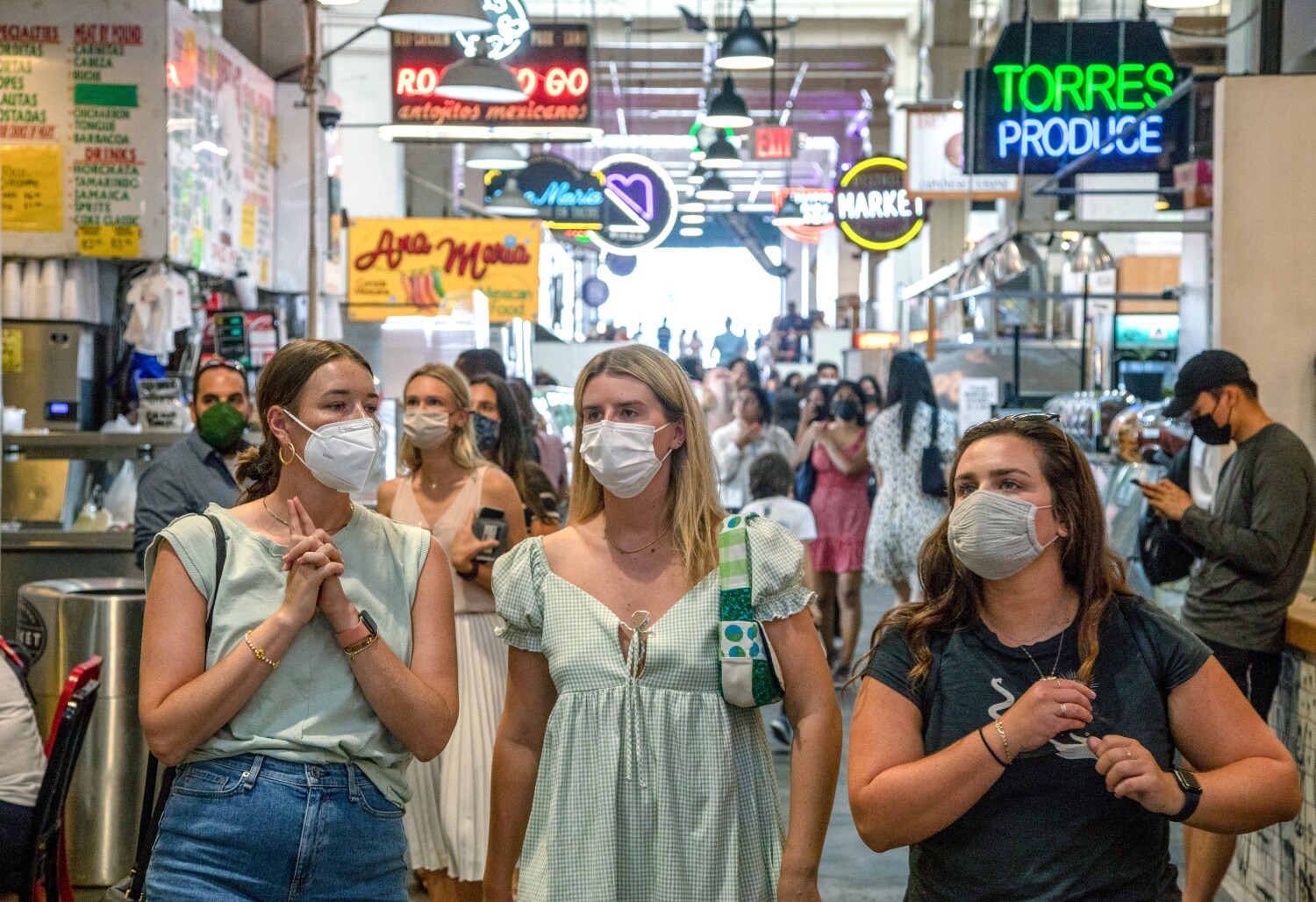 Los Angeles County will not reintroduce a universal indoor public mask mandate after significant improvements in the region’s coronavirus case and hospitalization rates.

Aside from wiping out the order that would have gone into effect on Friday, the recent downtrends are fueling some optimism that the month-long COVID wave fueled by hyperinfectious Omicron subvariants is finally beginning to subside.

“We are currently in a decline,” LA County Public Health Director Barbara Ferrer said Thursday. “We are happy to see that. It would be a welcome relief if this current surge is past its peak.”

Based on the available data, there is no need for a mandatory masking measure in the near future, she said.

“It’s reasonable to assume that the recent drop in cases will result in a further drop in hospital admissions over the next few weeks,” Ferrer said. “Although there is no way to predict the future, the case and the status of hospitalization suggest there are fewer transmissions.”

A renewed face covering mandate would have applied indoors to everyone aged 2 and over in a variety of settings and venues, including shared office spaces, manufacturing and retail environments, event spaces, restaurants and bars, gyms and yoga studios, educational institutions and children’s programs.

Masks remain required — as has been the case for months — in LA County public transit areas, including in taxis, Ubers and Lyfts and at airports, as well as in healthcare facilities, nursing homes, prisons, jails, emergency shelters and in environments where businesses or venues require it .

County health officials have been warning for months that a new universal indoor mask mandate is possible if hospital admissions get past a certain point.

As the possible implementation date drew near, the concept came under increasing criticism – from local residents who questioned its necessity and effectiveness; from business groups wondering how this would affect the local economy; and by some elected officials, who expressed concerns about undermining public confidence and sparking further opposition.

Under LA County’s plan, if the region meets the high COVID-19 community level as defined by the US Centers for Disease Control and Prevention and stays there for three consecutive Thursdays, a new mask order would be enacted.

A high COVID-19 community level means that a county is experiencing significant community sprawl and has recently recorded at least 10 new weekly coronavirus-positive hospitalizations per 100,000 residents.

LA County entered this category on July 14 and stayed there last week – with Thursday being positioned as a crucial date.

But coronavirus cases started declining last week, and hospital admissions also fell. LA County used its own data to calculate new weekly coronavirus-positive hospitalizations at 9.7 per 100,000 residents — just below the threshold to trigger the mask bid. The CDC calculated a rate of 10.7, but Ferrer said the federal agency’s data predates the county’s.

It remains unclear whether LA County will continue to pursue a potential mask mandate should there be three future consecutive Thursdays in the high COVID-19 community level.

“We have changed the framework numerous times to reflect the changing trajectory of the pandemic,” Ferrer said. “We will continue to listen to what the data tells us about which frameworks are most helpful to us as we assess how to protect each other.”

As of Thursday afternoon, LA County had an average of about 5,900 coronavirus cases per day for the previous week, down 13% from the previous week’s average of 6,800. On a per capita basis, the latest rate is 409 cases per week per 100,000 population. A fall rate of 100 or more is considered high.

Some LA County hospitals have seen an increase in hospitalizations this month, but those numbers have fallen.

One of these was Centinela Hospital Medical Center in Inglewood. dr Paryus Patel, the facility’s chief medical officer, said he saw a surge of cases in June before rebounding, followed by a further surge during the July 4 holiday.

The facility saw three to five people hospitalized daily for COVID-19, a number that rose to 12 to 15 people after the bank holiday weekend. Those shots have been declining, but people need to remain vigilant, Patel said.

Patel also said young Latino patients and older Black residents were among the COVID-19 patients during the last wave. He said more black patients have been infected and are often coming to hospital with pre-existing conditions that make their illnesses worse, including heart failure, diabetes and high blood pressure.

Watts HealthCare Corp’s Emergency Clinic. has recently observed more sick patients with COVID-19 symptoms, as well as asymptomatic people who have tested positive for the virus. dr Oliver Brooks, the facility’s chief medical officer, said he was surprised he didn’t see higher levels of illness, such as shortness of breath, pneumonia, dehydration or fatigue.

“I think that’s another reason why we’re seeing a higher case rate — because people are also hearing, ‘Oh, even if you get COVID you’re going to be fine,’ so it’s all kind of feeding together,” Brooks said .

Brooks said the high case numbers in recent weeks were likely caused by a combination of the ultra-contagious BA.5 subvariant and pandemic fatigue, with people tired of wearing masks, social distancing and washing hands.

People “generally put out more aerosol these days” by hugging, talking to people and singing, he said.

“It’s summer, and while people are out more, it’s less likely to spread [there], people are more social,” Brooks added. Plus: “They’re also more socially together internally, so they’re more into each other. You see, people aren’t social distancing — and I honestly think that’s the main thing.”

While the decision not to continue the mask mandate was based primarily on hospital and case rates, Ferrer said her teams analyzed additional data that overwhelmingly supported a recent drop in transmission.

The weekly number of jobs reporting clusters of coronavirus cases stands at 399, down from 429 the previous week. Case numbers in the poorest areas of the county fell 5% over the past week. And the California COVID Assessment Tool released by the state Department of Public Health estimated the effective transmission rate in LA County was 0.98 as of Thursday — suggesting the spread of COVID-19 is likely stable at this point.

While virus concentrations in wastewater remained high at two of LA County’s largest treatment plants, Ferrer said progress was evident, with the plant for the southern and eastern parts of the county seeing a decrease in virus presence and that for the city of Los Angeles starting at the plateau .

She added that the number of outbreaks in skilled care facilities has increased slightly.

The step back from masking means the soon-to-be-started traditional school year will likely be mask-free, like it was in the spring. The circle message elicited a tweet of support from LA Schools Supt. Alberto Carvalho.

“The right decision at the right time, following the right science,” he tweeted.

Opinions among students, parents and school staff remain divided, with some families fearing the prospect of mask requirements returning. Others would have been relieved as case numbers remain high and the country’s second-largest school system has halted weekly testing for coronavirus infections.

Ferrer continues to strongly recommend covering indoors, including in schools.

Despite recent improvements, LA County is still struggling with an immense amount of transmissions. The most recent case average remains well above the peak of the delta rise last summer, and officials note the figure is likely well below due to widespread use of at-home testing.

The declines could be due to several factors. As the high prevalence has become clear in recent weeks, some people are increasingly putting on masks and taking other precautions.

It remains unclear if BA.5 is starting to run out of people to infect, Ferrer said.

At the current prevalence of cases, in a group of 50 people there is a 60% to 70% chance of someone being infected, she said. “I would strongly advise that everyone keep their masks on.”

“Any infection carries the potential chance of not only showing immediate symptoms of COVID, but also long-lasting COVID,” Ferrer said. “And repeated COVID infections can also increase the risk of other serious health problems for some. … In light of the unknowns, we strongly recommend taking measures to avoid contagion.”

Although cases are declining and hospitalizations are relatively low, the same is not true for deaths, the ultimate lagging indicator of the spread of the coronavirus.

Ferrer called it “disheartening misinformation” when people say nobody dies from COVID. “This ignores the very real suffering and pain of those who are losing family members to COVID, and it ignores the brutal death rate still associated with this pandemic,” Ferrer said.

In the first half of this year, nearly 4,400 people across the country died from COVID-19. That number is double the typical six-month average number of deaths from drug overdoses, flu and car accidents combined, according to the county’s health figures.

Howard Blume, a Times contributor, contributed to this report.

'It was super scary': First Washington resident diagnosed with monkeypox talks about his experience

Front loader used to ram into Chase Bank in Lynnwood

‘The Young And The Restless’ Spoilers: Victoria Newman (Amelia Heinle) Marked As A Target By Ashland Locke (Robert Newman)! Is She In Danger?!