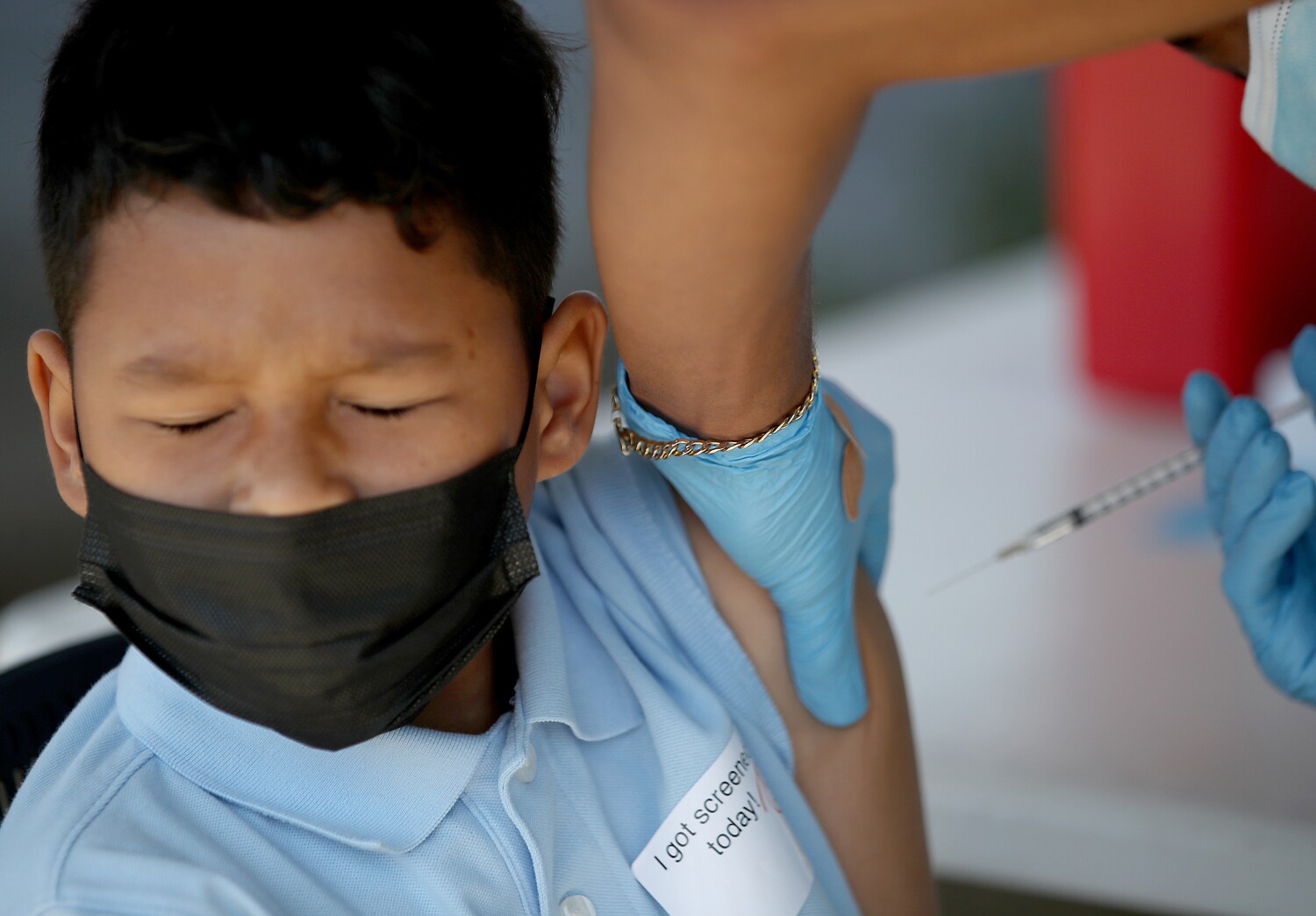 As summer vacation draws to a close, health officials are urging parents to get their children vaccinated against COVID-19, with a warning that the start of the school year could lead to a spike in cases.

Infections and hospitalizations are falling after a prolonged summer wave, but that progress could be called into question when schools reopen.

This will mark the first time during the pandemic that the traditional school year in California has started without a statewide school mask mandate, and vaccination rates — while robust for the general public — have been low among children.

While deaths from COVID-19 are less common among adolescents than adults, they do happen. Los Angeles County on Friday reported its 12th COVID-19 death in a person under the age of 18.

“COVID-19 is here to stay, but we have learned methods and acquired tools to reduce its impact on our health and well-being,” the state Department of Health wrote in its latest guidance for schools. “California’s schools can manage this disease in a sustainable and adaptive way.”

“Not only do immunizations provide protection at the individual level, but high immunization coverage reduces the burden of disease in schools and communities and can help protect those who are unvaccinated or those who may not develop a strong immune response to vaccination.” it in the guidelines .

About 41% of 5- to 11-year-olds in California have received at least one dose of the vaccine, according to data compiled by The Times.

The number is about the same for Los Angeles and Orange County. In comparison, 87% of 12-17 year olds in LA County were dosed, while 74% in Orange were dosed.

“My expectation is that after the kids get back to school… we’ll probably have another wave in early fall,” said Dr. Orange County Health Care Agency director Clayton Chau at a briefing Thursday. He noted that the number of children vaccinated in Orange is “pretty low, like any other county.”

Chau said he believes there will be “maybe, God forbid, another wave in the winter.”

“We cannot predict whether or not we will have another variant, and whether the new variant will be more severe and more transmissible than others,” he said.

There is a possibility of a slight increase in cases early in the school year — particularly in elementary schools due to the lower vaccination rates — but there are ways to reduce the risk, said Los Angeles County public health director Barbara Ferrer.

“I think everyone knows what we can do to keep schools as safe as possible so kids have all the learning opportunities they need,” she said, noting that it would be wise to continue wearing masks in schools wear . “Masks work, and they work well. And that would be an appropriate, time-limited approach [add] in a protective layer when transmission rates are still high.”

While LA County is still grappling with a significant spread of the coronavirus, it is slowing. Officials reported an average of 4,700 new cases per day last week, down 17% from the previous week. The latest weekly case rate per capita is 327 per 100,000 population; a rate of 100 or more is considered high.

Earlier this week, there were fewer than 10 new coronavirus-positive hospital admissions per 100,000 LA County residents, according to the US Centers for Disease Control and Prevention; by Thursday it had ticked up to 10.1. This keeps the county at the “high” community transmission level defined by the CDC. A rate less than 10 would allow LA County to enter the moderate category.

A total of 1,206 coronavirus-positive patients were hospitalized at LA County’s 92 hospitals as of Thursday. That’s about 9% down from what appeared to be the peak of the wave two weeks ago. Health authorities estimate that around 43% of these patients will be hospitalized with a COVID-related illness; the rest are coronavirus positive but are in hospital for other reasons.

The percentage of LA County’s COVID-19-related emergency room visits is also declining, as are the number of outbreaks at nursing homes and homeless shelters, and the number of workplaces reporting clusters of cases.

“The California Department of Health and Human Services reports that the total number of hospitalizations across the state, including in Southern California, has peaked,” Ferrer said. “Their modeling predicts a further decline in hospital admissions, along with some plateaus and fluctuations throughout August.”

However, deaths related to COVID-19 are on the rise. In the week ended Friday, LA County recorded 121 COVID-19 deaths, the most since late March. This is the by-product of past increases in cases and hospitalizations, and it will likely take time for deaths to start falling as other metrics have.

The latest pediatric COVID-19 death in LA County, announced Friday, was in a patient between the ages of 12 and 17. There were seven COVID-19 deaths in LA County in this age group, three among 5- to 11-year-olds and two among under-5s.

A pediatric COVID-19 death is defined as occurring in someone who had a symptomatic illness before death or had pathologic signs of coronavirus infection in the heart, lungs, or other tissues at autopsy.

Orange County has reported five COVID-19 deaths in children under the age of 18. One of those who died was a previously healthy, unvaccinated teenager who suffered from multisystem inflammatory syndrome, which can be a deadly complication of COVID-19, according to an interview her father gave to KCBS-TV.

California has reported a total of 73 pediatric COVID-19 deaths: 48 among those aged 5 to 17 and 25 among younger people.

Meanwhile, some California counties are exiting the high COVID-19 community level — the worst on the CDC’s three-point scale.

The number of high community counties has dropped from 50 to 28 in the last two weeks. As of Thursday, 74% of Californians lived in high-community counties, up from 83% the previous week and 99% the week before that.

Nationwide, there were about 14,500 daily coronavirus cases in the week ended Thursday, down 18% from the week before. That is 260 cases per week per 100,000 inhabitants per capita.

There have been 293 deaths in the past week. In early June there were weeks with fewer than 200.

But officials are also watching a new Omicron subvariant, BA.4.6. A descendant of BA.4, it has accounted for only 1% of LA County’s coronavirus samples, but is attracting attention because “it’s accelerating at a similar rate to BA.5,” Ferrer said. “The question really is if it’s going to overtake BA.5 and really start to take over.”

“We pay attention to that,” Ferrer said. “We’re watching it closely because it looks like it has some advantages in terms of the rate at which it reproduces. We just have to see.”

Another Omicron subvariant, BA.2.75, which was a cause for concern in India, has yet to make an impact in LA County. Only one case was identified, “and this is an encouraging sign that this variety is not becoming as dominant in LA County as it is in India,” Ferrer said.

Ferrer said there is an expectation that boosters designed specifically against BA.5 and BA.4 could be available as soon as maybe next month. However, it is unknown if eligibility for the Omicron booster is restricted by age or other criteria.

Biden’s Problem Is Deeper Than Pessimism

Despite ‘defunding’ claims, police funding has increased in many U.S. cities

Where is my California inflation relief money?