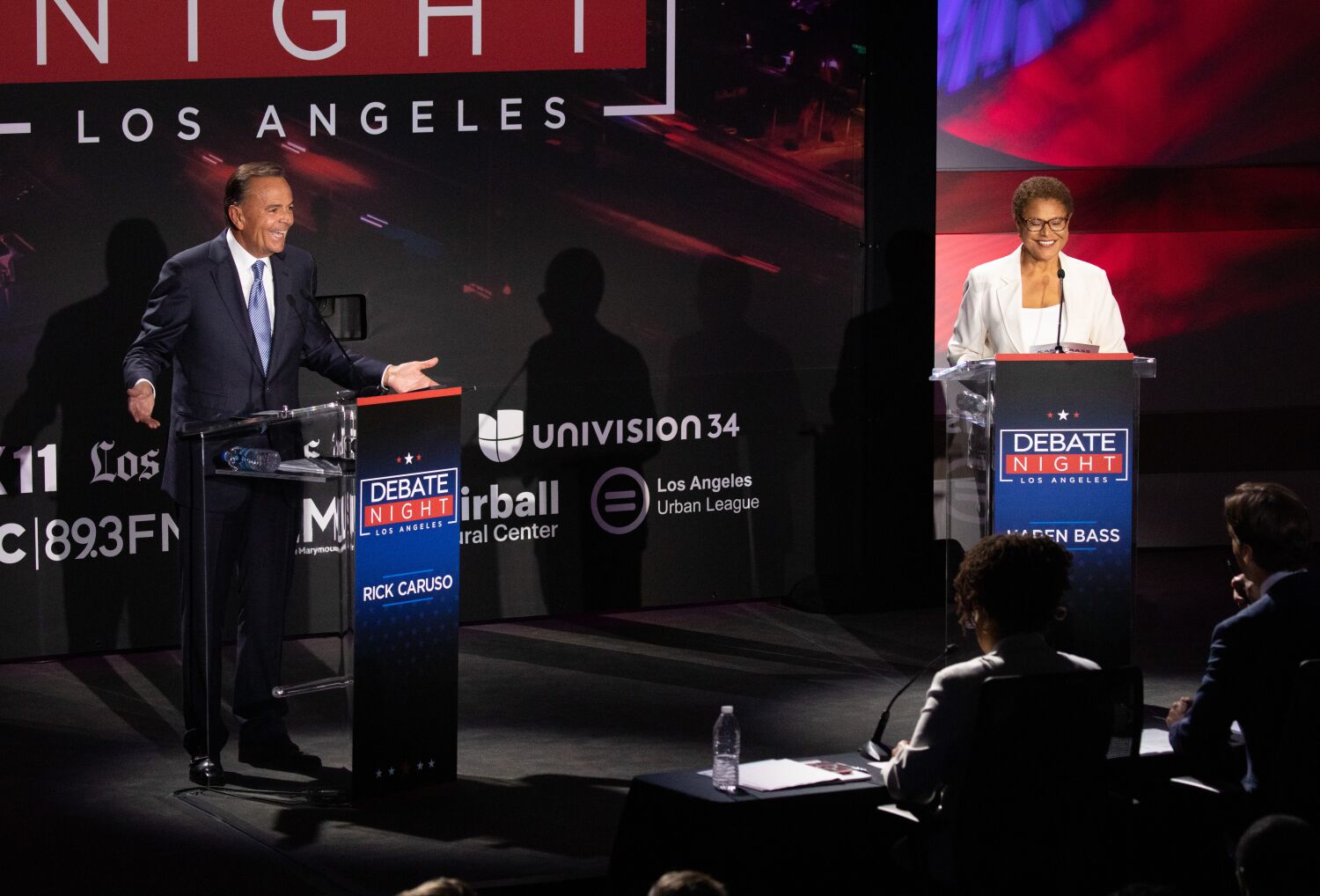 Wednesday night’s debate between LA mayoral candidates Karen Bass and Rick Caruso provided the public’s first opportunity to see the candidates in person ahead of the Nov. 8 election. Here are the key takeaways from the debate:

Bass has repeatedly slammed Caruso, a fresh approach for a candidate who has largely left the attacks to her allies.

She spoke in personal tones about her recent home break-in, telling Caruso that she was “disappointed” with his response to the incident. Bass said questions about whether their guns were legally held and registered were an “act of desperation.”

“You remember, when the Grove was broken into, I called you to find out how you were,” she said. “And instead you’re asking me to prove a thing or two.”

Bass later criticized Caruso for his repeated changes in party affiliation, noting that he twice changed between Republican and no party preference before registering as a Democrat that year.

“That’s the problem,” Bass said, “that you can’t just go back and forth like that.”

Some of her jabs at Caruso were more light-hearted. In response to a question, Caruso expressed support for having street vendors on the sidewalks outside his flagship mall, prompting Bass to quip, “It’ll be interesting to see street vendors outside the Grove.”

She also seemed pleased when she told Caruso that a Republican, former Rep. Mike Villines, had backed her.

Much was said about local issues, including homelessness and housing regulation. But the debate had a decidedly national stance, with mentions of migrants being sent to Martha’s Vineyard and the recent Dobbs Supreme Court decision.

Caruso sought to distance himself from his past Republican affiliation and support for former Ohio Gov. John Kasich as president in 2016. He said he now doesn’t share values ​​with the Republican Party. Kasich’s endorsement is an attempt to prevent Donald Trump from becoming the GOP nominee, he said.

“We have Republican governors who send people to different cities that were used as props,” Caruso said. “That’s wrong. That’s disgusting. I don’t agree with that. I don’t want to be part of this party.”

Bass began the debate by noting that she’s a “lifelong pro-choice Democrat” — a reference that hasn’t escaped anyone in the audience or in town who saw her smack Caruso with the gavel for previously Supported anti-abortion politicians.

“It is a question of democratic values. We’re a democratic city and I think that’s one of the differences between the two of us,” Bass said. “Whether or not the City of Los Angeles manages healthcare is a matter of values, and I am and always have been.”

They agreed on a few things

When asked to describe the “state of Los Angeles,” both candidates immediately used the word “crisis,” while Caruso added that the city is “beyond crisis.”

Both candidates agreed on the need to address corruption at Los Angeles City Hall and pledged to appoint an “ethics czar” if elected.

Bass said Wednesday that Norm Eisen, President Obama’s lead ethics attorney, would review all of the city’s policies “from the top down” if elected.

She also said she would ask each of her officers to make an ethics pledge to “ensure we have a very clean administration.”

Both candidates also said that they believe the city’s moratorium on evictions should be extended, but that policies need to be adjusted.

“We cannot allow more people to become homeless when the moratorium is lifted,” Bass said. “But at the same time we also have to help landlords, especially mom and pop landlords.”

She said the moratorium should be extended but landlords should also be supported.

Caruso criticized the blanket nature of the moratorium, saying the city’s housing department needs to create a screening system for struggling tenants to prove they can’t pay. If such a system can be put in place, the moratorium should be extended, Caruso said.

“I’m more than happy to support someone stay on at a reduced rent or no rent at all until they get back on their feet, as long as you prove you can do it,” Caruso said. But, he continued, if someone is making money and can afford the rent, “they shouldn’t be carried.”

The moratorium in its current form “is not fair to anyone,” Caruso said. “So we can do it right.”

The topic of homelessness led to an emotionally resonant exchange between the candidates.

He laid out his plan to temporarily house 30,000 people by building 15,000 new tiny houses and placing another 15,000 in “sleeping pods” in empty warehouses and other buildings.

Bass responded that this was effectively an expensive patch solution and that he hadn’t thought about how to pay for the services to help the people he put in those beds.

“My problem with Rick’s plan is that it only calls for emergency shelters,” she said. “You have to have shelters, but you have to put people in permanent supportive shelters.”

Caruso knocked on Bass, saying the homelessness crisis only got worse while she was in public office. He was also more assertive when he said law enforcement has a role to play in keeping the streets clean.

He also echoed statements she made to the Wall Street Journal that the city “is not going to solve the homeless problem in four years.”

Caruso got the most laughs

Caruso and Bass seemed comfortable sparring, but the developer made the audience laugh at several points during the hour-long debate.

During an exchange of words, Bass and Caruso argued about the state of the Democratic Party. Bass described the party as “more diverse in every way” than before.

“Doesn’t seem to accept me,” Caruso said to much laughter in the room.

At another point, someone in the audience sneezed loudly. Caruso didn’t slow down, inserting the phrase “God bless you” as he continued his response on homelessness.

When Bass rated her sense of security as a 5 on a scale of 1 to 10, Caruso’s grim wit drew a few laughs.

Bass seemed to notice the attention Caruso was getting for his jokes. “No weird relief?” she asked, once the moderators didn’t return to Caruso for an answer.