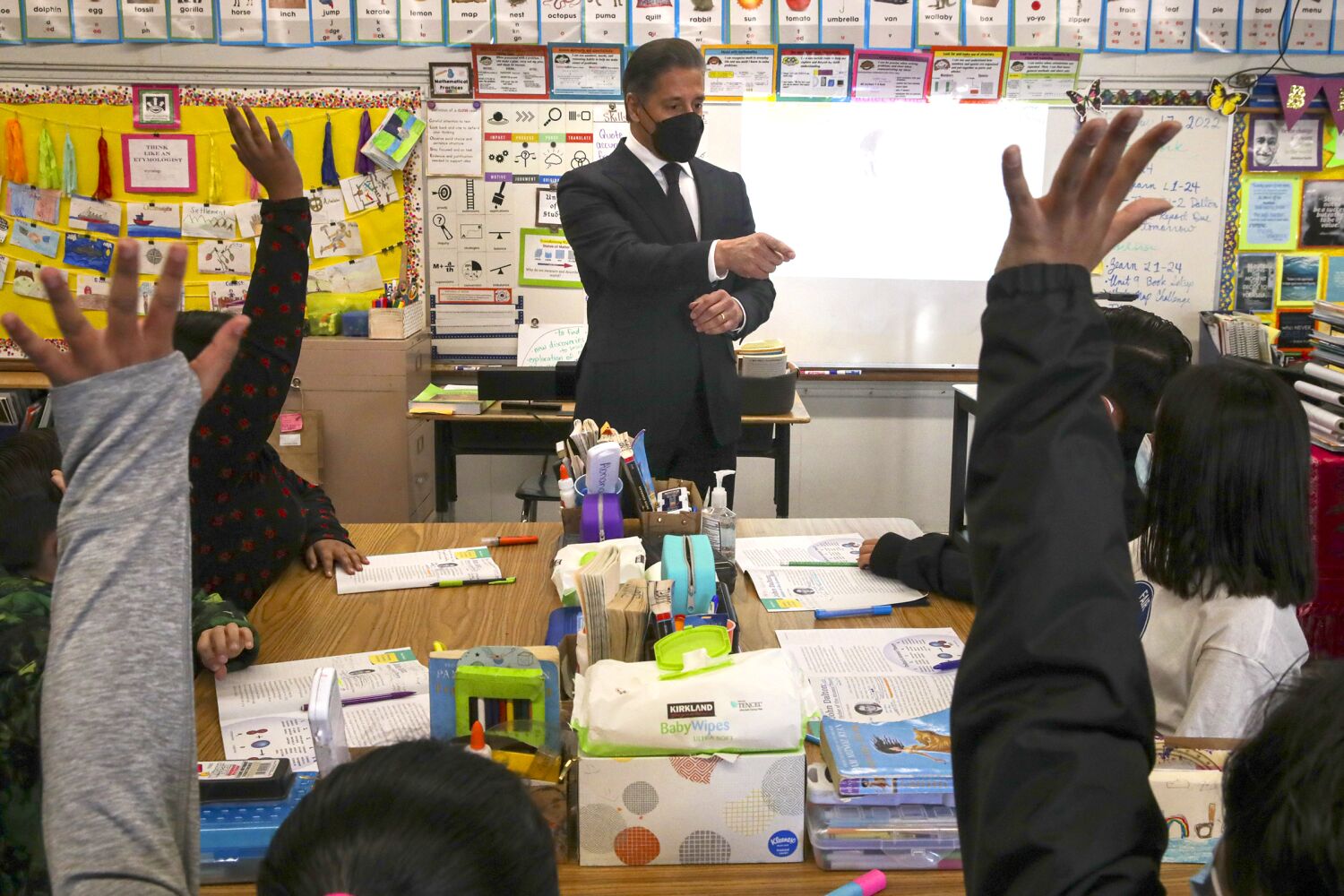 Under pressure from the teachers’ union, Los Angeles school officials have changed their plan to establish four optional “acceleration days” to encourage student learning in the wake of the COVID-19 pandemic.

Instead of Wednesdays at what the district had described as strategic points of the school year, the days will fall at the start of winter break and spring break under a tentative arrangement, officials said Wednesday.

According to United Teachers Los Angeles, union members have yet to approve the deal.

The original schedule was for the first of these days to occur in three weeks, on October 19, but the potential value of that particular day was increasingly uncertain.

As part of the announced agreement, the original four acceleration days will become regular school days again and the school year will end four days earlier as a result.

According to the new plan, the acceleration days fall on December 19-20 and April 3-4.

In a statement, LA Schools Supt. Alberto Carvalho stressed that even if key details had changed, students would still be given additional study time.

“Although our original plan would have allowed for real-time understanding of student gaps, this updated plan allows students to benefit from the guidance and support provided by fully staffed schools,” Carvalho said. “At the end of the day, we will continue to do the right thing for our students.”

The district’s statement also emphasized the importance of additional study time as a strategy to be pursued in concert with others: “Numerous studies have shown that the learning loss from the pandemic is a national crisis that every school district must address. Acceleration days are one of many innovative teaching strategies being used to support students.”

During these additional days of classes, teachers and support staff are expected to meet with students individually or in small groups. It is expected that this type of tutoring will also take place during normal school days and outside of school hours during a regular school week on an extended basis.

So far, however, only a few students have taken part in tutoring, Carvalho recently admitted. He promised to drastically increase attendance.

The teachers’ union had called Acceleration Days a waste of time and a waste of $122 million, but accepted the revised schedule as a better continuation of learning and “loyalty to the contracted work year.” “

The district had allocated up to $122 million to cover fully staffed acceleration days plus three additional days of teacher training. These training days have already taken place.

Despite heated rhetoric from the teachers’ union, both sides have been moving towards an agreement for at least a week.

The teachers union’s most recently released counter-offer was structured like the agreement, but had two acceleration days on the Monday and Tuesday of the week-long Thanksgiving break instead of the start of the three-week winter break.

The teachers’ union had urged its members to boycott the upcoming extra study day on October 19, even though it was optional and teachers would have received extra pay. The day was also optional for students and aimed to help those most in need of academic support.

However, the union had maintained that the district had no right to schedule the extra study days without first bringing the matter to collective bargaining. In addition to calling for a boycott, the union filed documents with the state employment agency, alleging an illegal act and urging state officials to intervene.

Filing the complaint would not have immediately prevented the country’s second-largest school system from executing its schedule as intended. However, principals reported that uncertainty about how many teachers would attend made it difficult to ensure that the extra study time would be useful to students.

UTLA filed the complaint, which it described as an unfair practice charge, with the California Public Employment Relations Board, which would have investigated the allegations. The union wanted the Labor Board to advise LA Unified – and if necessary, force it – to eliminate the four days of school “immediately” and “return to the status quo”.

After that, the union said, the district could begin “negotiating in good faith the amount and distribution of employee workdays (voluntary and mandatory) and other resulting terms of employment.”

Although the district defended its actions as legally appropriate, it chose to begin negotiations with UTLA on the matter — a decision that culminated in the revised plan.

Details of the alternative proposal emerged early Wednesday in an email that another union, Local 99 of Service Employees International, sent to its members. Local 99 asked its members to get involved because if the contingency plan were approved, some of them would have to work those extra days. Members of this union include teacher assistants, bus drivers, cafeteria workers and janitors.

District officials said they were working to reach an agreement with all unions over the extra study days.

Philly Police: Carjackings on the rise in Philly, but there are some hotspots

Royal Family: Prince Harry and Meghan Markle To Return To The UK In September!