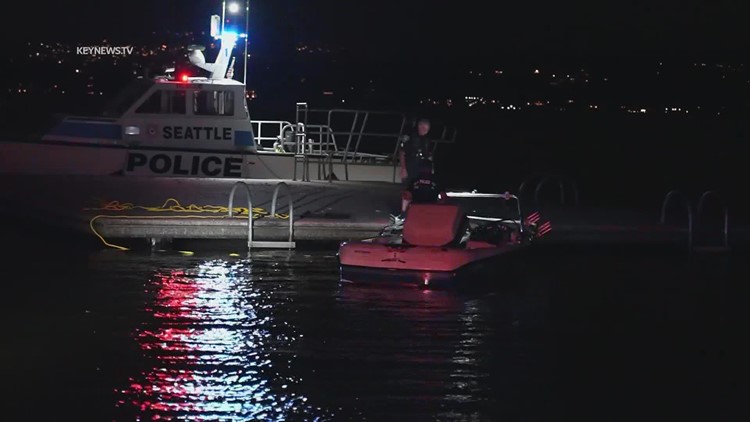 With busy lakes, nice weather and shorter days, authorities are reminding people to be responsible on the water.

SEATTLE — Two boat collisions occurred in less than 24 hours on Lake Washington over the weekend. A boat sank in one collision and police are searching for a boat involved in the second collision that left five people hospitalized.

The Seattle Fire Department said Sunday afternoon a boat and a jet ski collided on Lake Washington near Seward Park. Five people swam to shore. Nobody was injured. The affected boat was three quarters under water around 6 p.m

On Saturday night, a small speedboat with seven people on board collided with another boat on Lake Washington near the SR 520 Bridge. Five people were taken to the hospital in stable condition.

“Suddenly this boat just came towards me. It was like a big shadow,” said boater Ted Dominguez.

Dominguez said he was on the boat with six friends. He said his boat was run over and submerged under water. The boat that hit Dominguez didn’t stop.

“I thought they would turn around and help us,” Dominguez said. “No, they left us.”

He claims the boat was significantly larger than his speedboat and did not use a light.

The Seattle Police Department is investigating. On Sunday, the department’s port department stressed the importance of using the right lighting.

“Especially at night, it’s really important to use navigation lights or running lights, and it sounds like that was a factor in that,” said Seattle Port Unit Police Officer Aaron Frausto.

The accident happened around 9:45 p.m., more than an hour after sunset.

Frausto said the collision was an example of why having easy access to life jackets is important.

“Things can happen pretty quickly, so you should be able to pull these out in seconds, much less than a minute,” Frausto said. “Really, has to do with keeping your head above water so you can breathe.”