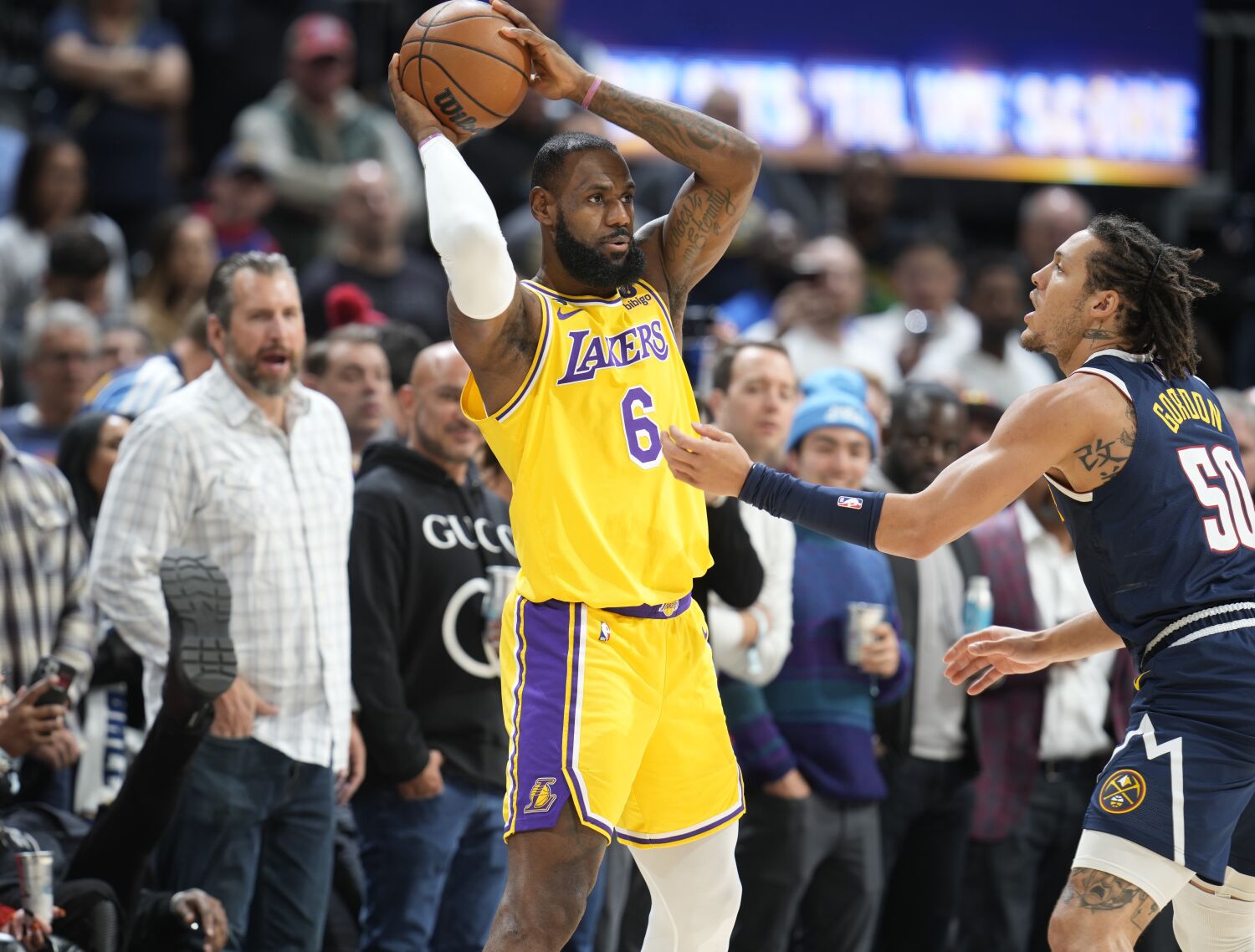 The Lakers season ended last spring at the Denver arena, the Lakers exited the building and entered an offseason with some changes.

It was on the final buzzer of that game that news of Frank Vogel’s eventual dismissal broke, no doubt an unfortunate first step toward the change the Lakers were seeking after finishing 11th in the West.

Returning to Denver on Wednesday with new coach Darvin Ham, seven new players and a bunch of the same problems, the mood in the locker room was undeniably bad just four games into the season.

Losing can be that, but something bigger seems to be weighing on this team – and especially its stars.

For the second year running, Anthony Davis sat at his locker in complete silence before and after his celebratory post-game comments. Before the game, Ham said that actor Will Smith’s words (as part of the team’s “Genius Series” of guest speakers) about adversity resonated with him because “we all saw our part in it, I especially found that out pretty quickly coach of this team.”

Patrick Beverley, looking for signs of optimism, pointed out that the Lakers shot 26.5% from three-point range as positive (considering they shot 21.1% en route).

And then there was LeBron James, fresh from an eight-turnover game, looking at the team’s offensive struggles and explaining that he needed to do more in his 20th season in just four games — and four losses.

All of this makes it seem to James, Davis and others who were here last season that the Lakers are not at the start of a season but are more or less continuing down the hopeless path that last year’s team walked along the way to get there is lower third of west.

“Some of it is obviously pre-season stuff. Obviously it’s a new system, a new group of guys together who are still trying to get comfortable with each other,” James said. “I think defensively, except tonight with our transition – I think we gave up over 30 in the transition. This is not good. But overall we’ve been third in defensive standings this season, top 10 in pretty much everything defensive. And we were offensively bringing up the rear.”

James is right — the Lakers’ defense fell to fourth after Wednesday’s 110-99 loss, but the offense is still the least efficient in the league. Jason Kidd’s Dallas Mavericks have the best offense in the league, averaging 122.9 points per 100 possessions. The Lakers are the only team under 100 points per 100 possessions most recently, with 97.1 points. Last year, the gap between the best and worst offense in the NBA was 12.4 points.

James vowed to be more aggressive and seek his own offense as a remedy.

Davis, who said his back pain was nothing serious, seemed almost offended when asked if he would be compatible with Minnesota on Friday.

“It doesn’t matter at this point,” Davis said. “At this point it’s all about the Lakers and what we need to do. I’m not interested in other teams. We have to figure ourselves out first before we can focus on another team and I think that will be our focus. How can we get better?”

Russell Westbrook’s absence from the lineup was revealing in two ways.

First, it showed that the blame Westbrook took on for the Lakers’ offensive struggles earlier this season should be spread more evenly around the room. Everyone has played their part in how the Lakers play offensively.

The shooting problems extend well beyond one player – James is third on the team in the three-point percentage and he’s barely making more than 25%.

Among players across the league with 10 or more three-point attempts this season, four different Lakers (Westbrook, Lonnie Walker IV, Davis and Beverley) are in the bottom 12 with three-point percentages below 20%.

When asked how the Lakers can turn things around, James simply said “take shots.”

“We need to figure ourselves out first before we can focus on another team and I think that will be our focus. How can we get better?”

And that’s not really Westbrook’s thing either. While blame for the Lakers’ struggles can be shared, his skills don’t do much to address the team’s greatest weaknesses.

Westbrook has credit for being a more active defender, but he’s not giving an inch to the team’s distance problems offensively (only Denver’s Aaron Gordon and the Clippers’ Norman Powell have both shot worse from deep this season).

But its value as a shotmaker has long been in the mid-range, with emphasis on the fringe. And with less space than ever near the basket, as the Clippers’ Paul George said last week, team spacing issues aren’t doing Westbrook any favors either.

It points back to the decision that has lingered since the offseason on whether to attempt to package the team’s remaining tradable future draft equity with Westbrook for rotation assistance.

The front office stance has been to refuse all deals, including two future unprotected first-round picks, unless the Lakers are plunged into the title fight.

Did the Lakers defend well enough in the first week to push them into a deal that brings significant shooting upgrades? Are the other holes on the roster and potential future issues like Davis’ already worrying back too big for red flags?

Or will the offensive numbers progress naturally enough? Can the Lakers afford to wait with stars like Davis and James already so obviously frustrated that they’re losing?

The Lakers left Denver much like they did at the end of last season with real questions about the right way to move forward with no clear answers.

It’s not the position every team wants to be in after four games, but it’s the one the Lakers are in.

What makes Patrick Mahomes and Josh Allen so hard to stop?