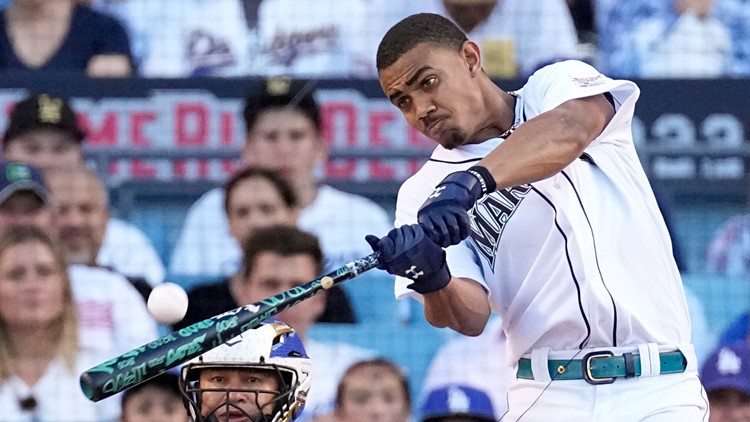 Mariners fans knew Julio Rodriguez was something special. Now the rest of the country knows it too.

LOS ANGELES — Of all the MLB All-Star Week experiences, perhaps the biggest hit is the Julio in Hollywood experience.

Julio Rodriguez has burst onto the national scene at Dodger Stadium, something that feels like a fateful sight and is also the start of a legendary career.

After stealing the show at Monday’s Home Run Derby, he captivated an audience.

He has remained as down-to-earth and humble as ever.

Rodriguez has introduced himself to baseball fans across the country and has shown that he belongs in the same conversation as the best players in the game.

“Just realizing that I’m here, that I share this stage with these people, and that this is where I belong,” he said.

Julio waited until next year to win the Home Run Derby in Seattle.@KING5Sports pic.twitter.com/QmpW8B7u8a

One of the players he shares the stage with is his Seattle teammate, Ty France.

“I call him my babysitter,” Rodriguez said. “He always takes care of me, he always gives me good advice and makes sure I’m going in the right direction.”

“Not just in LA, I was his babysitter all year,” France said. “I joke with him and tell him they don’t pay me enough to babysit him because he’s the J-Rod show.”

The J-Rod Show put on a laser show with every club hit.

His star shines so brightly that he’s now drawing comparisons to a former Mariners.

“He’s like the next Griffey,” said Seattle fan Dylan Maez.

“Let Julio be Julio,” Jr. said. “There’s no comparison to anyone but him. Comparing him to other ball players isn’t fair to him or the other guys. For me, I just want him to keep growing and learning the game and being himself.”

Rodriguez seems to be taking that advice.

“If taking care of one day at a time has gotten me here, I’m honestly pretty happy and cool with it,” he said.

His Southern California debut is just the latest chapter in his growing legend.

“It’s his rookie year. He’s just settling in and he’s on the biggest stage in baseball. He’s going to be doing this for a long time and this won’t be his first All-Star game,” France said.

$5,000 reward for info on suspect in shooting of Lady Gaga's dog walker

YouTube makes it easier for creators to sell merch to fans