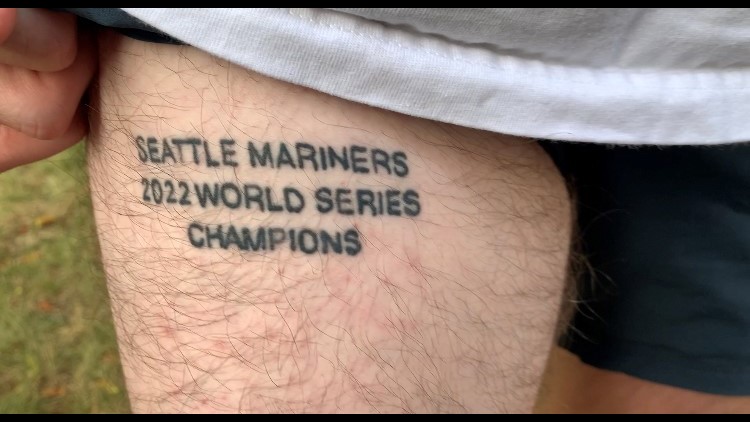 So far, so good for the upbeat ink of a Seattle college student. #k5evening

SPOKANE, Wash. — Seattle’s JoJo Wass is a true believer and he’s got the ink to prove it. The Gonzaga student already has a Seattle Mariners 2022 World Series Champions tattoo on his thigh, just above a tattoo of the Seattle skyline.

“We do it! We do it!” he exclaimed as the M’s beat Toronto to keep their fledgling playoff streak alive.

But here’s the thing: He got this tattoo before the season even started. Almost everyone made fun of him for it. After all, the Mariners hadn’t made the playoffs, let alone the World Series, in a generation.

“Oh, now everyone wants one,” Wass said. “My brother says he’ll get a matching one if they win. But on his butt, not his thigh.”

He apologizes for the rude language to a woman standing nearby.

If, for some inexplicable reason, the Mariners fall short of a World Series win this year, Wass says he will simply change the last digit of the year to reflect a future championship and keep cheering them on.