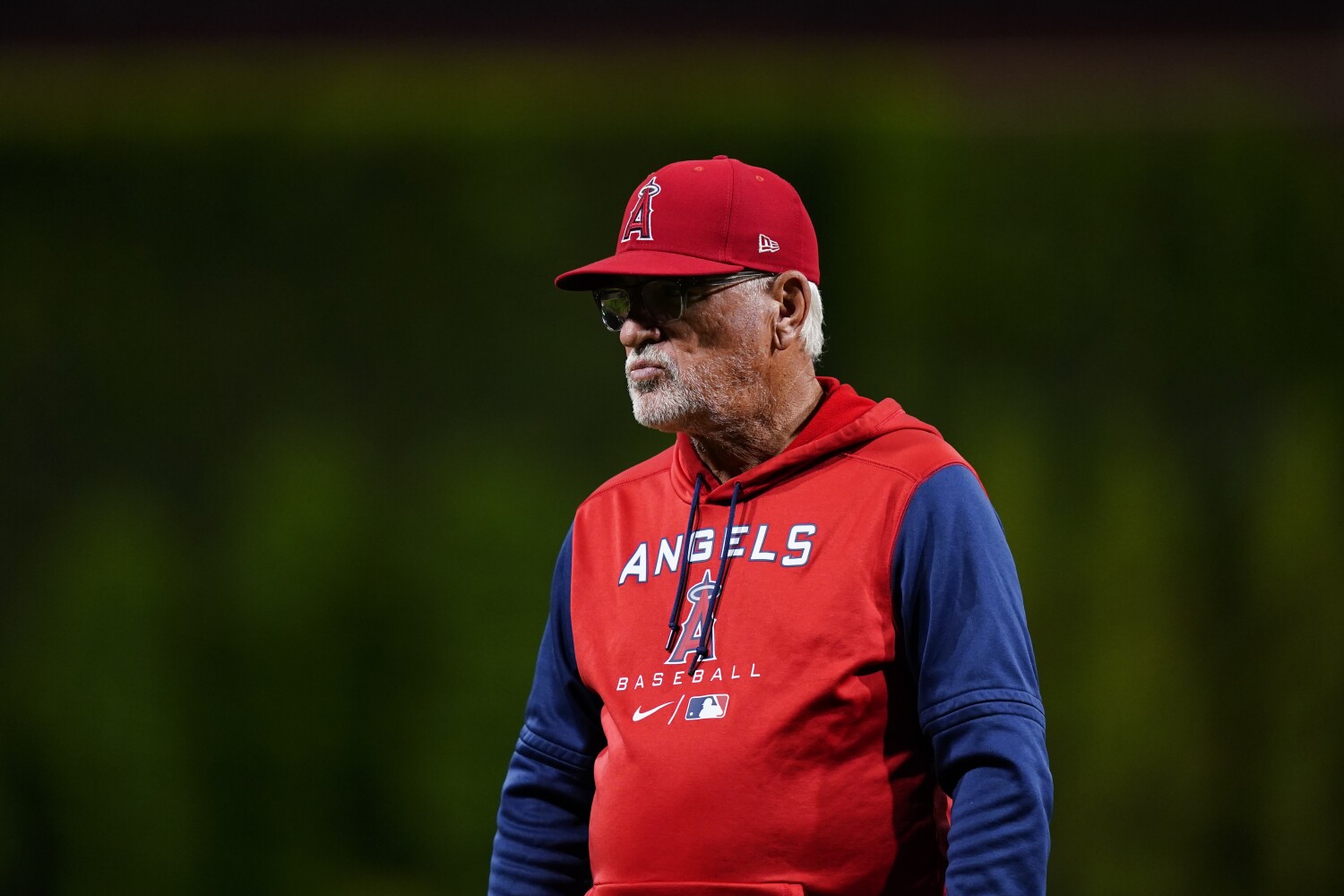 Joe Maddon knows the ins and outs of baseball better than anyone alive. And he has the mature perspective that allows him to see the humble importance of a boy’s game in the larger universe. He is a mature, considered, and articulate speaker of the big game. To make him the scapegoat for the Angels collapse is absurd after he was expected to succeed with an inconsistent and modestly gifted pitching team. The Angels can change managers every season and they won’t find a better man.

As a graduate of Cal State Fullerton, I am delighted to have fellow Titans Phil Nevin join Mark Kotsay as Major League Manager. But firing Joe Maddon and naming “Duck” as manager is nothing more than “moving deckchairs on the Titanic.” As long as someone who must be James Dolan’s twin brother, Arte Moreno, owns the team, 2002 will keep creeping in the rearview mirror.

That’s it! I am officially giving up the angels forever. I almost gave up when they squandered hundreds of millions on Hamilton, Pujols and Rendon. All the money should have been spent on pitching; this is Baseball 101. When they hired Maddon, I came back on board knowing that if there was a way, he would find him. Now Arte is panicking after an east coast road trip against the best baseball teams that are head and shoulders better than the Angels. I’m out forever

Enough is enough. After decades of failure, it’s time to shut up shop. Arte Moreno is said to sell the players to other teams. Send Trout to the Yankees and Ohtani to the Dodgers where they can win World Series rings. We longtime Angels fans have suffered enough!

Joe Maddon fired! Is Dave Roberts next? Terrible record in one-run games. Terrible record of extra-inning games. Why? Because these are decision situations. Something he’s terrible at. However, he excels when his team scores eight runs or more.

I have no grudges against Aaron Donald and I think he’s a great player. Still, I have a big problem with professional athletes asking for their contracts to be renegotiated because they feel they are worth more now than when they signed them. Nobody forces an athlete to sign a multi-year contract. They usually do this because they want the security of several years in case they are injured or have years off. When was the last time you heard from an athlete who told management he was taking less than his contract due because he was having a bad year? Perhaps the solution should be that multi-year contracts are not allowed and athletes are paid based on their performance in the previous year. Oh wait, I can already hear the athletes yelling obscenities and threatening to strike at this idea!

Who is in the cabin?

I’m not sure who Lon Rosen is talking to; However, I can tell you that many fans are not happy with the revolving door in the Dodger booth. It reminds me of the old Abbott and Costello skit “Who’s on First?” In this case, it’s “Who’s broadcasting the game today?” Granted, the days of Vin Scully doing a solo show are over. I think Joe Davis did an admirable job taking over Vin and I’ve always loved that Charley Steiner and Rick Monday did radio. However, the rotating “personalities” in the TV booth are bush league. Baseball teams need chemistry to be successful. The same applies to the broadcasting booth.

The title of the article should have been, “Too Many Voices Speak of the City.” The numerous Dodger announcers are all serviceable, interchangeable, and vanilla. Los Angeles was blessed with so many superstar voices, but Vinnie and Jerry Doggett made a special team (who wouldn’t have had that next to Scully?) and I can still hear them a little muffled on my transistor under the covers while I’m so pretend I’m sleeping.

LIV Greed is not good

I hope this reaches not only Dustin Johnson but also Phil Mickelson, Graeme McDowell, Ian Poulter, Sergio Garcia and the other PGA players who have chosen to participate in the LIV Golf Tour.

Thank you for making it clear that money is your priority! Your ethics and understanding of what you are getting into with Greg Norman and the Saudis are despicable, unconscionable and totally lacking in any sense of reality. Each of you is already a multi-millionaire. Both you and the Saudis have blood on your hands and you sold your souls for money and nothing more.

We can only hope the group fails miserably and you are never seen in competitive golf again.

By far the best story in the athletic department on Sunday was about the Cal State Dominguez Hills women’s softball team. The team flies north to play Sonoma State and rents vans to get to the game. They stop in Oakland to get some food and their vans are broken into and their valuables and team gear are stolen. The police did not respond to their calls. Undeterred by the lack of police support, the team continued to Sonoma State and won their first regional title in school history. This should have made a cover story in the sports section (if not the front page of the newspaper) because of CSDH women’s resilience in the face of adversity. I’m calling on the Angels and the Dodgers to each donate $25,000 to help replace the team’s lost valuables and equipment.

Thank you for your reporting and for hiring author Thuc Nhi Nguyen to write about UCLA women’s softball, basketball and other sports, and also for making the front page sometimes and not burying it in the back.

It’s important to give credit where credit is due, and UCLA women’s teams have been just as successful, if not more so, than men’s teams over the past 10 years. The women’s coaches in softball and basketball are just great leaders too.

Thank you Bill Plaschke. I don’t usually cry during breakfast, but today I certainly did. Your portrayal of this wonderful relationship with your “little brother” Andrew touched my heart at a time when I was beginning to feel helpless and hopeless.

Thank you for sharing your life with this remarkable young man. Andrew was lucky, you were lucky, now we are all lucky to have shared your experience.

What a wonderful column from Bill Plasckhe on his relationship with Andrew, his “little brother” who became a lifelong friend. Something we should all learn from, that we give ourselves to other people, that sport is a means of uniting people and having fun. It’s good to see that sport is a means of bringing people together in these divisive times.